In the first part of this series, we look at the Sharks' offensive zone forechecking system when the opposition does not have control of the puck. As pictured above, an active pinching defense is one of the keys to San Jose's aggressive forecheck.

Share All sharing options for: Examining the Sharks' offensive-zone forecheck

Since joining the Sharks, head coach Todd McLellan's record has been nothing short of incredible. He's 262-125-54 all-time, good for a 65.5% points percentage which averages to 107 points over an 82 game season. Only Dan Bylsma and Bruce Boudreau have a better points percentage amongst coaches who have been in the league for more than 3 years. McLellan compiled more wins in his first 4 seasons than any coach in NHL history. He also currently holds the Sharks franchise record for most wins by a head coach.

When McLellan arrived in San Jose, many questions were asked of his style. What would the Sharks look like under McLellan? What would their team identity be? What systems would be implemented? And, of course, the big question in everyone's mind: is McLellan going to be enough to take the Sharks to the Stanley Cup? At the time McLellan himself answered:

I've had a chance to coach under some very good mentors," said McLellan, citing Wild general manager Doug Risebrough and coach Jacques Lemaire. "If you look at the Minnesota organization and the number of Stanley Cup rings they've won, and perhaps the type of game they play, that would be considered more of a defensive style.

"Then you come to Detroit," McLellan continued, "and see the number of Stanley Cup-winning people around here, and the type of game they play. It's a very good mix, and to steal from both would be something I think a wise coach would do."

McLellan was hinting at the foundations of his system. There's no mistaking the Sharks' identity now, six years into his coaching career. They've been a top-10 puck possession team (by Fenwick Close%) every year except for 09-10, although they responded the very next season by taking the "Corsi Cup" as the best possession team in the league in 10-11. The Sharks rank among the league's best again this year, only behind the Kings and Blackhawks. It's been McLellan's blend of puck possession, a shoot-first attitude, and smothering defensive style that has led the Sharks to become one of the most consistent organizations in the NHL.

Let's take a look a what the Sharks are employing as their primary means to combat their opponents on every inch of ice, specifically their system for regaining possession of the puck. I've split up this up into sequences of the game. First, we'll look at the forecheck following a shot, dump-in, or when control is in question, followed by the neutral zone forecheck in later articles. This part of the series focuses on the team's offensive zone forecheck, or their forecheck following a dump-in, rebound, or when the opposition doesn't have control of the puck.

I honestly don't know what to call the Sharks forecheck because I haven't seen an exact diagram in print.  It mostly looks like a left-lane lock, but can appear like a 2-1-2 split when the Sharks dial up the pressure.  I labeled it a 2-3 System (Center Weak-Side Lock) because that's the best description. The weak-side (opposite boards from the play) is patrolled by either the center (on the left) or right defenseman (on the right). The Sharks send 2 forecheckers in hard, with the RW often taking a wide or split pathway to be puck, also sealing up the boards.

The picture above isn't a perfect representation, (it's a true left-lane lock). Instead the Sharks place their Center on the left side (where F3 is). The Sharks will often play the puck to the left side (F2 in the diagram above, although for the Sharks this will likely be F1 in reality), and then force the opposition D to play or carry the puck back toward the other forward (usually RW) crashing in, (F1 on the right of the diagram above, but probably named F2, and often the RW, in the Sharks system). The system is built to funnel the puck behind the net. If the forecheckers are able to separate the puck, the center will slide toward the middle of the ice ready for a one-timer.

The Sharks send F1 (usually but not always the LW) on a hard path toward the puck. He can take an outside-in path, forcing the defense to carry or play the puck D-to-D, or he can take an inside-out path if the Sharks want to force the play up the wall. F2 (often the RW) usually splits wide along the weak-side boards and then supports down below the goal-line taking away the D-to-D pass (an 'Over', or 'Rim' zone exit play).  F3 trails F1 play-side (note, he does not always go to the left side, as in a traditional left-wing lock, but is more often then not in that position) and seals the boards against the 'Up' and 'Reverse' plays. The objective is to get F1 in hard to separate the opposition from the puck, with support on either side from F2 and F3. A very common theme for the Sharks, no matter where they are on the ice, to outnumber the opposition with support on either side.

The Sharks' defensemen are very active in this forechecking system, pinching in anticipation of a pass up the boards. If the opposition makes a successful D-to-D pass, and then rim the puck past the Sharks F2, the playside D  will pinch down sealing that puck off. F3 will be recovering towards center ice when he sees the play is going away from him, and if the defenseman pinches, F3 will replace him at the blueline.

You'll notice from the sequences below that the Sharks leave the middle of the ice open deliberately. This may seem dangerous, but because the opposition is pinned on the boards (often with their back to the middle of the ice) the puck very rarely makes its way to the center (although quick transition teams do take advantage of this weakness). Teams will often play the puck up the boards where the Sharks have players in abundance. In addition, the weak-side winger (F2 or F3 depending on the direction of the play) will quickly adjust when he sees that the play is going away from him.  His job is to skate back to the middle of the ice, sealing off a pass through the middle, and possibly replace the pinching D at the blueline.

Let's look at the film, first in a few screen shots from recent games against the Buffalo Sabres and Pittsburgh Penguins. 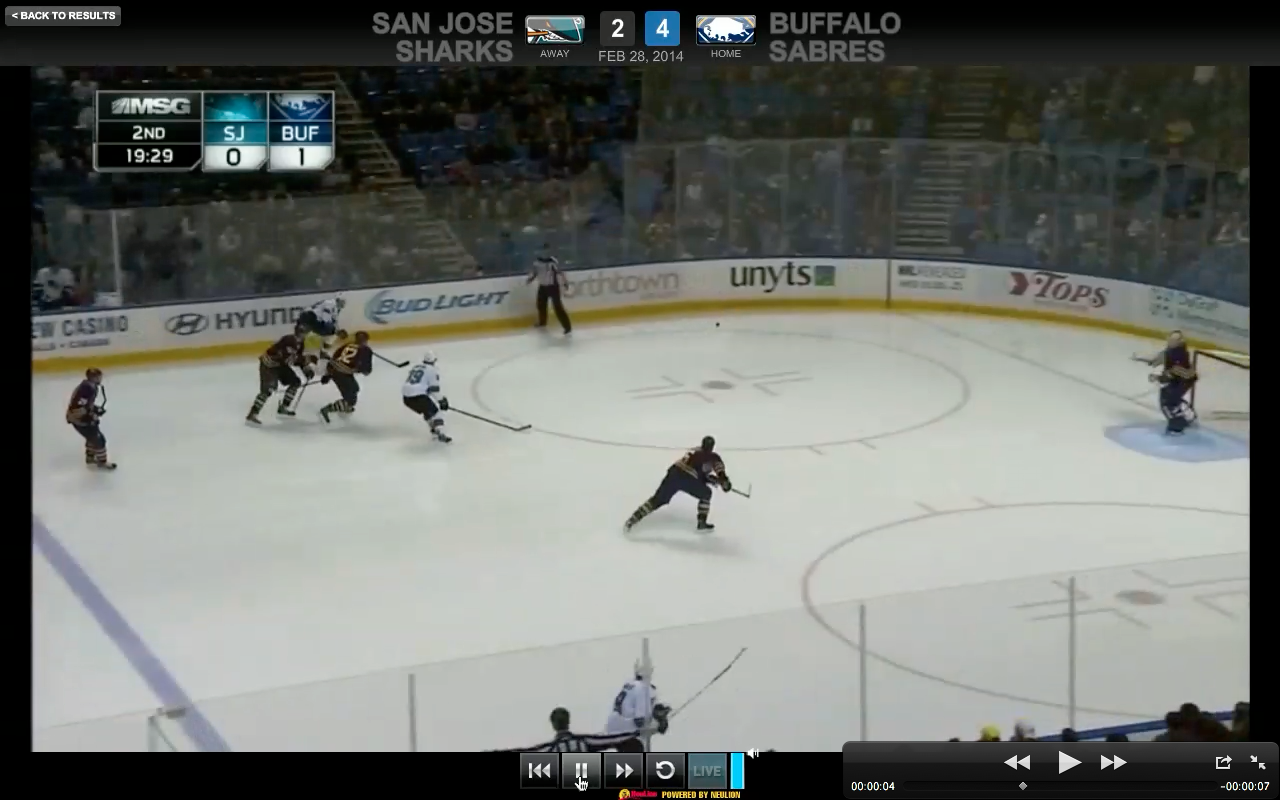 Above we have Patrick Marleau playing LW who's going to be the F1 (first forward in) on this play. Logan Couture is at C, playing F3 (third man high) and Marty Havlat is at RW on the opposite side as the F2. 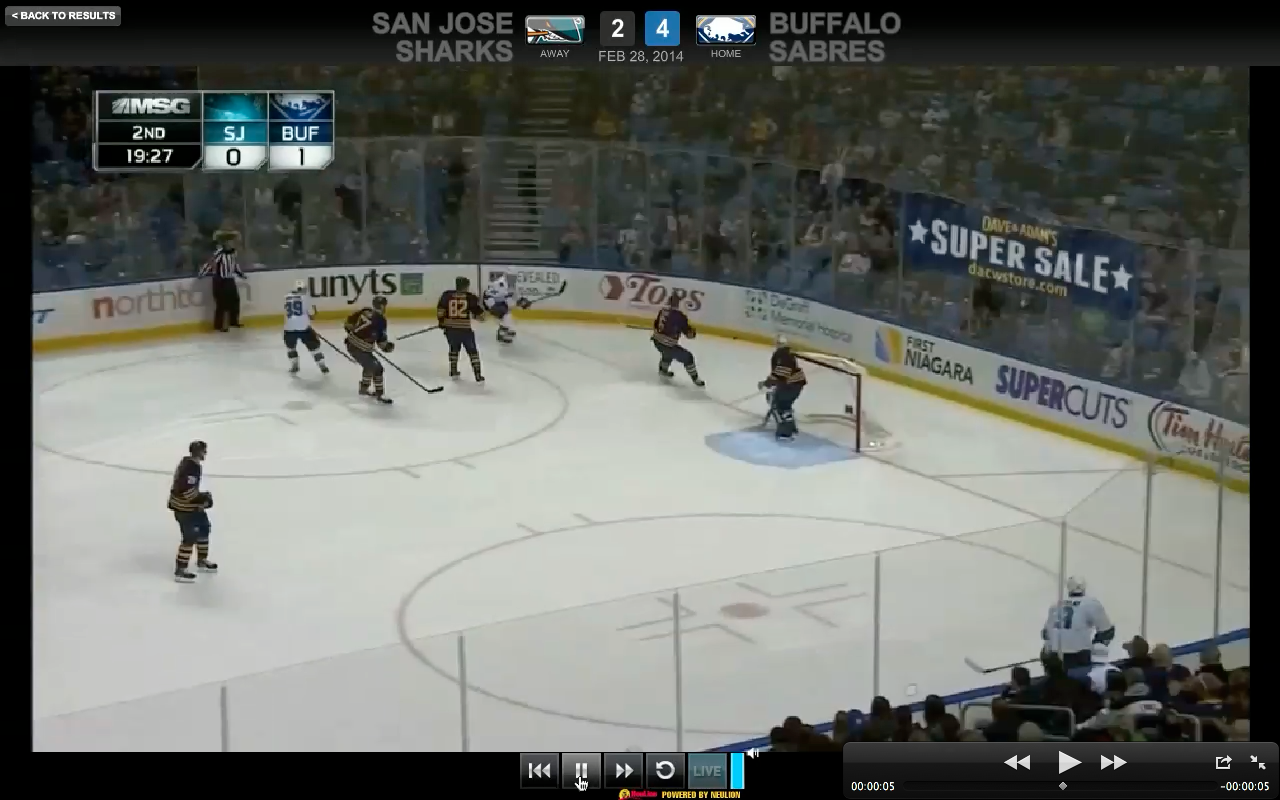 You can see above that Couture (C - F3) peels off to take away the play-side boards as Marleau (LW - F1) takes an outside-in angle toward the Buffalo defenseman. Havlat (RW - F2) is split well wide, but is closing quickly. (The Sharks played the forecheck pretty aggressively against Buffalo but, as we'll see later, not quite as aggressively against Pittsburgh). 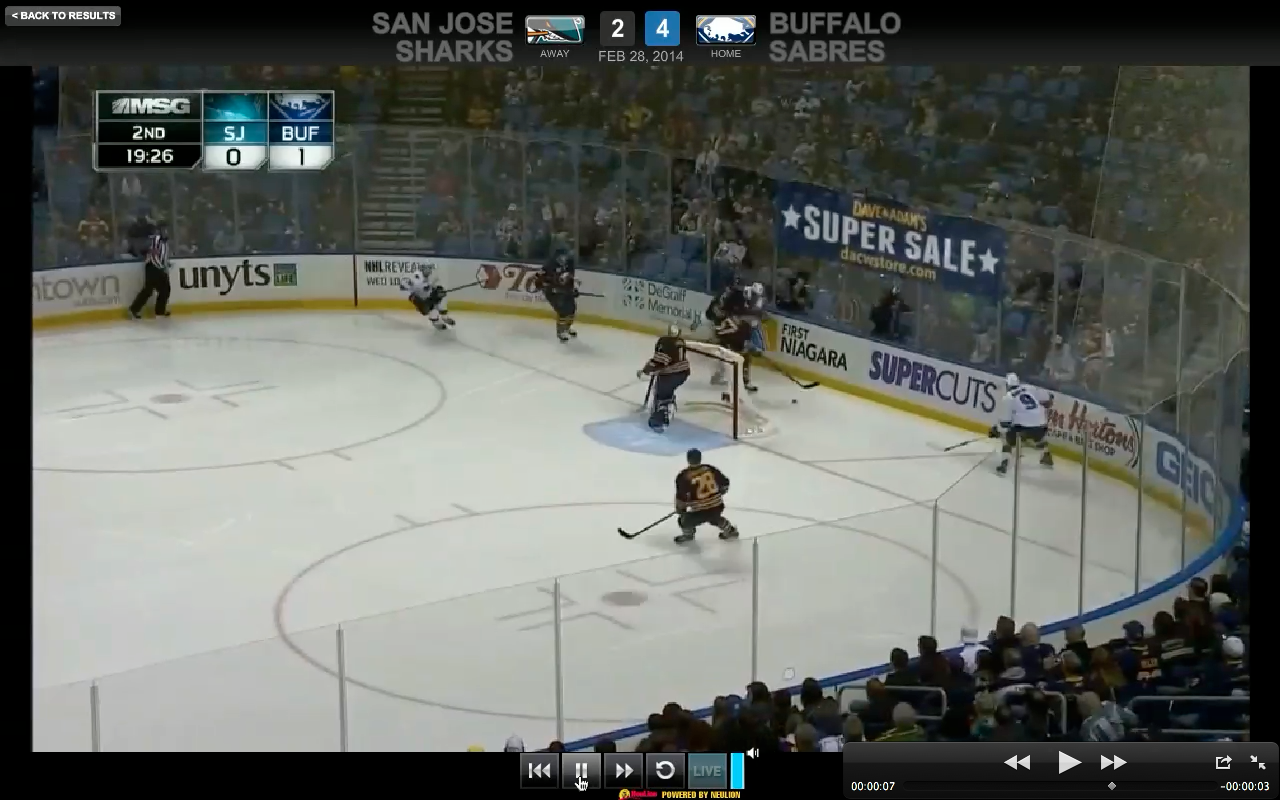 Marleau (LW - F1) continues to pressure as Havlat (RW - F2) closes. Couture (C - F3) is supporting along the boards but peels off as the puck moves behind the net, and the play begins to develop on the other side of the ice. This is caused by an attempted D-to-D pass by Buffalo but, as you can see, this is exactly what the Sharks were forcing on this play. Havlat is in perfect position to disrupt the breakout. 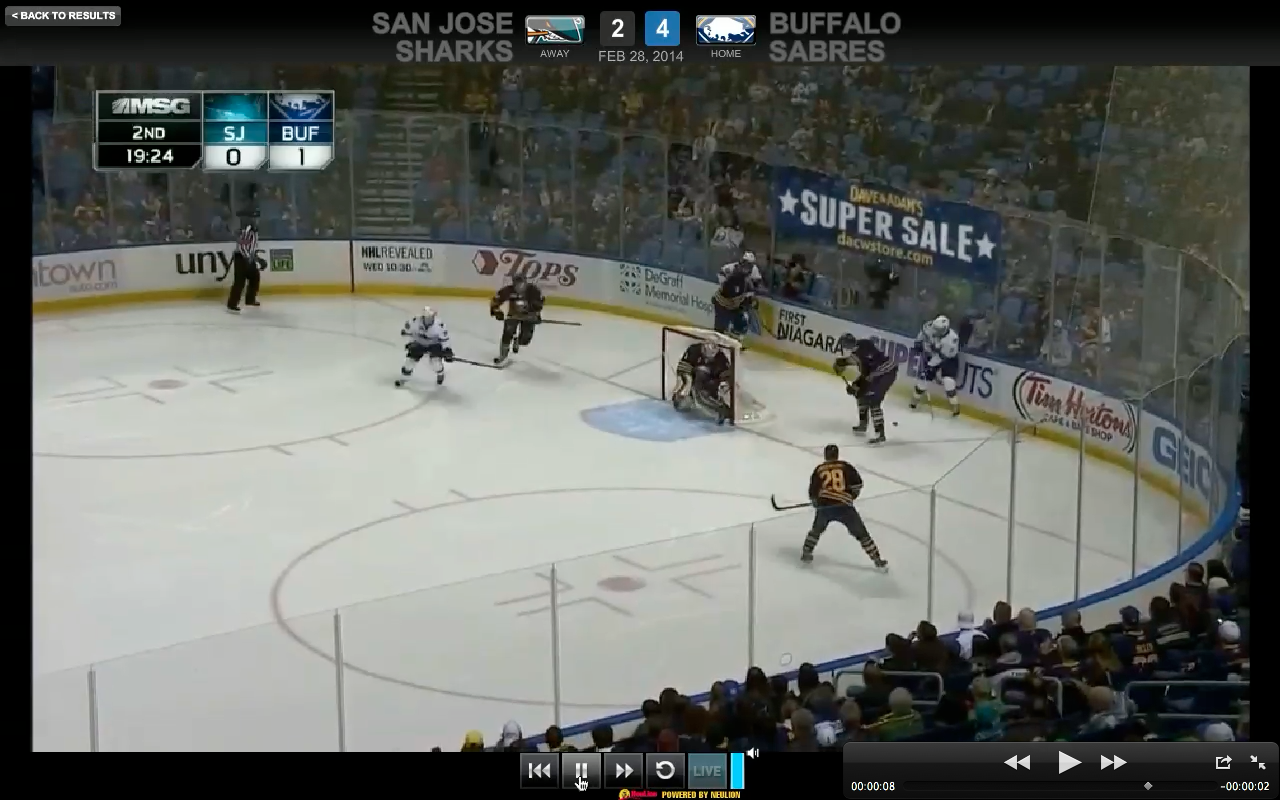 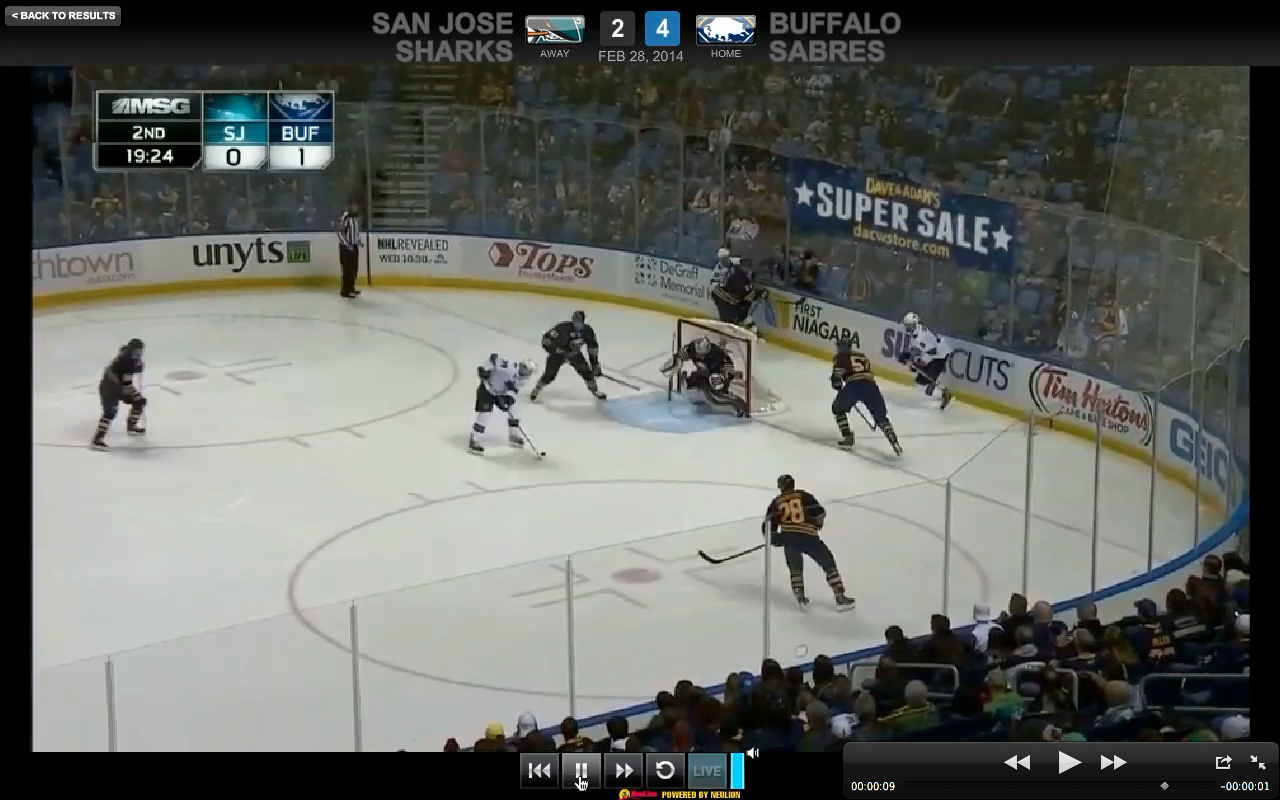 Havlat slips a pass to Couture, who is right in front of the net, for a nice scoring chance. If you watch Couture on this play you can see how the Sharks would respond if the puck got past Havlat. The right defenseman would pinch down the boards, and Couture would continue up the center of the ice to replace him at the blueline.

Let's look at one more. This time a little less aggressive, from the home game vs. Pittsburgh. 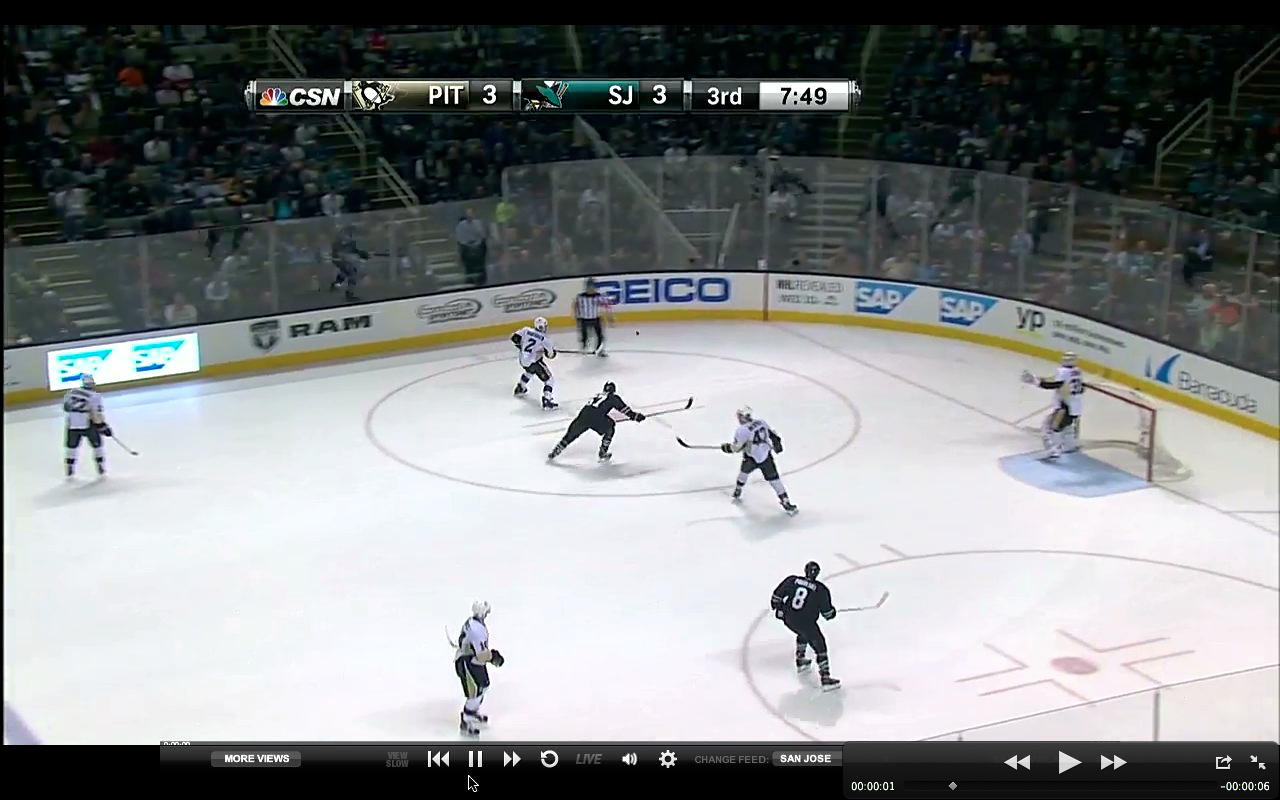 Above, Tommy Wingels (LW - F1) races toward the puck.  It's sitting in the left corner, which isn't ideal for the angle that Wingels needs to force the play back toward Joe Pavelski (RW - F2). Pittsburgh wants to move it quickly up the boards away from Pavelski, which they are able to do on this play. 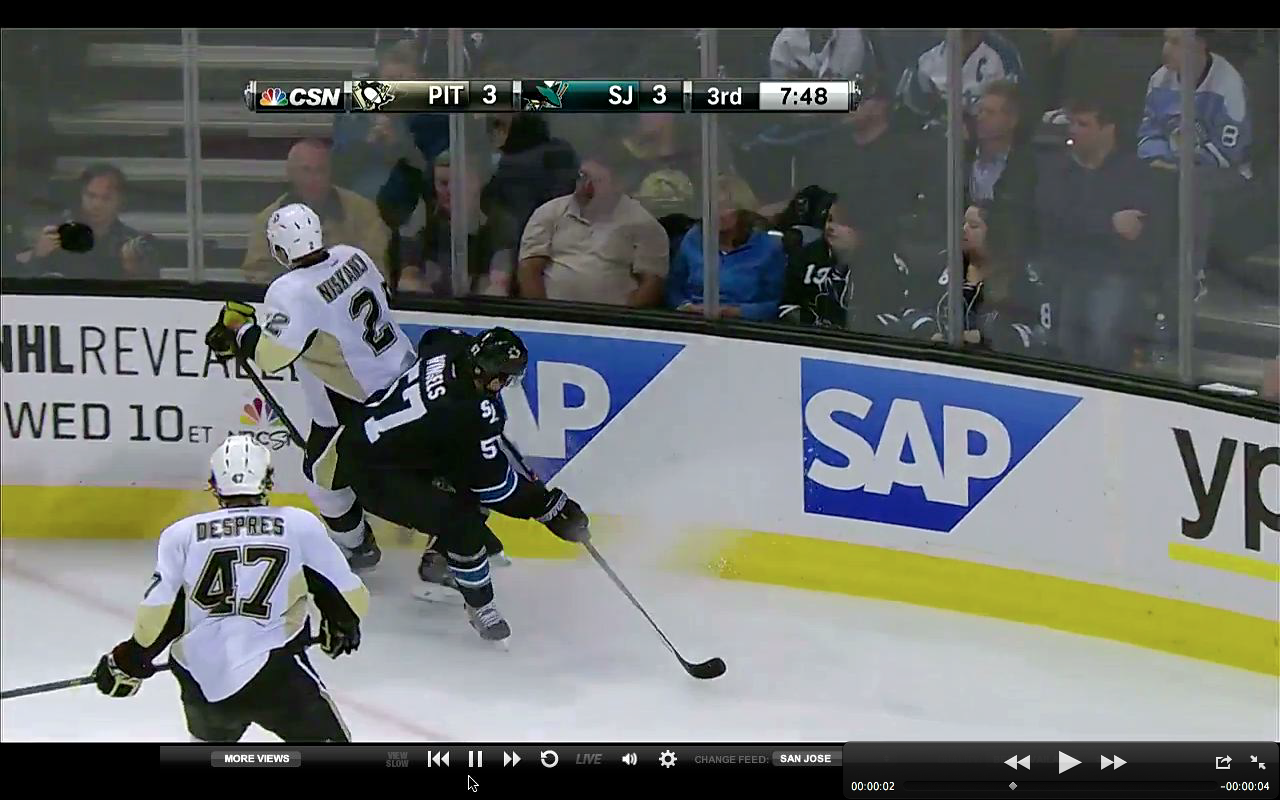 Wingels (LW - F1) tries to get outside (farther up the boards) body position but the Penguins defenseman Matt Niskanen slips the check and is able to move the puck up the boards so that his partner Simon Despres can make a play. 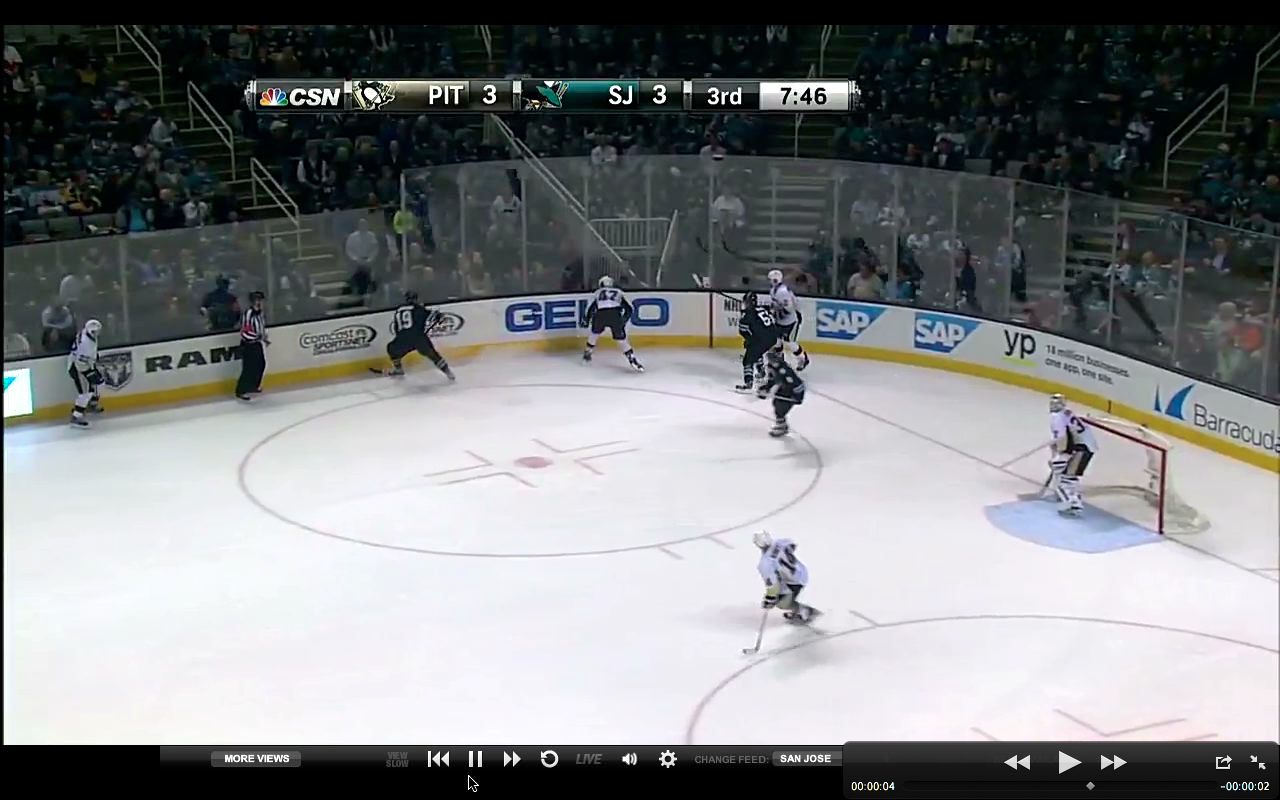 Above we see Joe Thornton (C - F3) entering the play securing the play-side boards. Despres doesn't have an option as Thornton is pinching down on him, and is forced to flip the puck over Thornton. Notice that Pavelski (RW - F2) has come from behind the net and is traveling up the middle of the ice as the play has moved away from his side. He's now in position to either back-pressure, backcheck, or trade with the D if they pinch in support. 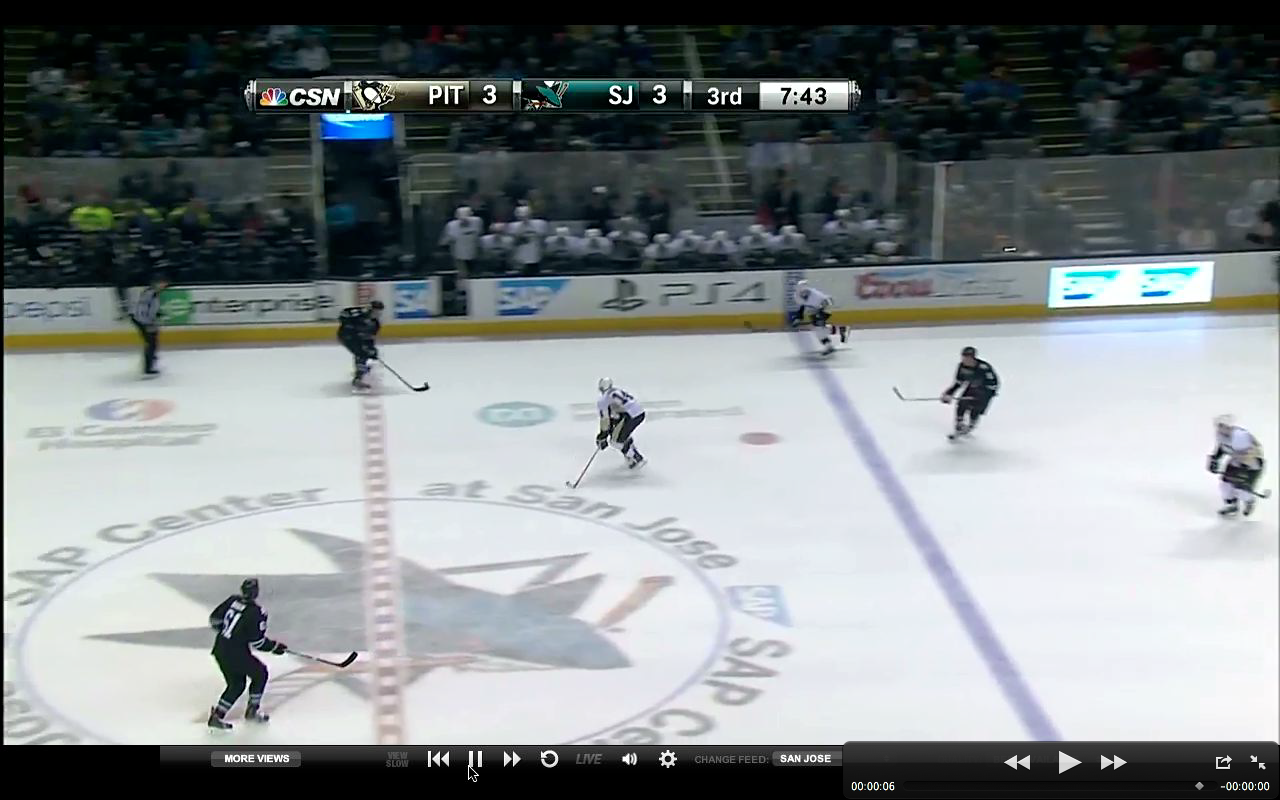 The puck squeaked out over the blueline, but Marc-Edouard Vlasic (LD) has backed off and is in control of the puck at the red line. Notice that Pavelski is in a great supportive position at this point. Had the play gone up the boards, Vlasic might have pinched if he thought Pittsburgh did not have control of the puck. Again, Pavelski would have replaced his position at the blueline if that were to happen. It's a risk vs. reward system. The Sharks do recover a lot of pucks low, but the system can lead to quick transitions the other way as defensemen pinch.

Finally, I feel that repetition is the best way to learn something. So here's a video of a ton of forechecking sequences. Pay close attention to how F2 and F3 react to the play, especially if it moves to the opposite side of the ice. The next thing to watch is what happens when the D will pinch (which is often), maintaining 2 supporting players above and below the play.