Scoring chances, zone entries, zone exits and more from the Sharks' 1-0 victory over the Rangers on Sunday afternoon.

Share All sharing options for: By the numbers: Game 69 vs. New York 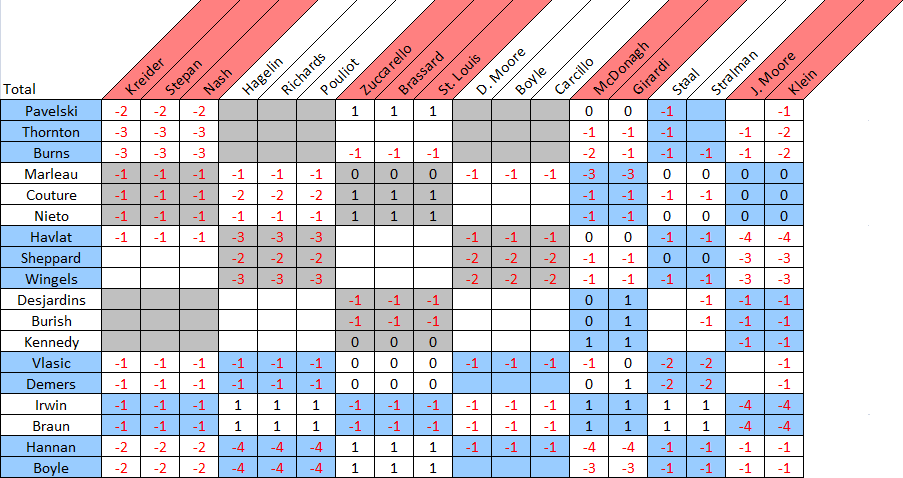 So this is pretty hilarious: the Sharks had six five-on-five scoring chances in this game but an additional five shorthanded chances. They nearly equaled the offense they were able to generate at even-strength on the penalty kill, and of course scored the only goal of the game while four-on-five. It's definitely a testament to how dangerous (and all-around effective) San Jose has been while killing penalties this season but being held to single digits in terms of scoring opportunities at evens isn't good, especially when you're giving up 16. It's always nice when these numbers line up with the eye test; I thought Matt Irwin was the team's best defenseman yesterday and, while still in the red, he and Justin Braun did manage the best chance differentials on the blueline.

You can trace the Sharks' inability to create offense yesterday to their neutral zone play; San Jose wasn't able to generate speed coming through the middle portion of the ice and ended up gaining the blueline with possession on less than 36% of their entries (and generated thirteen fewer entries, period, than the Rangers overall). Their shots per entry, both controlled and uncontrolled, were almost identical to the Rangers' but the Sharks were flat-out far worse than their opponent at generating entries, particularly of the controlled variety.

The third line combined for just two controlled entries all game which, as we'll see, was a direct byproduct of being unable to exit the defensive zone cleanly. The final two games of this road trip are probably not going to be the blueprint the coaching staff points to when it comes to refining the team's neutral zone performance.

It's not surprising the Sharks spent most of this game in their own zone considering their struggles in getting out of their end cleanly; less than a quarter of the team's defensive-zone puck touches were successfully advanced into the neutral zone. The third line of Marty Havlat, James Sheppard and Tommy Wingels turned the puck over on 9 of their 20 defensive-zone touches and were predictably drilled in the shot attempt department. Despite their two goals against the Islanders, those three had a pretty terrible road trip together; hopefully it's the last we've seen of them as a line, as much as I like what each of them brings to the table individually. For whatever reason, they've never been on the same page.