Bad puck luck or not enough energy? What is it that ails the San Jose Sharks power play, if anything?

Share All sharing options for: What's wrong with the Sharks' power play?

The demise of the Sharks' power play has been greatly exaggerated. The stats are out there if you want them - San Jose has scored just 10 power play goals since the start of the new year, and that's in a hefty 151.1 minutes of time on the man-advantage. This has driven normally smart, rational people into mild hysterics (it's still the Bay Area, we don't get that worked up over anything) over the seemingly faltering dominance of the Sharks power play.

Here's the problem: The power play doesn't really look any different in March than it did when it was banging home goals in October. So if the structure of the power play hasn't changed, what's the problem? Are the Sharks not moving their feet enough? Is there not enough energy on the power play? Have they become stationary or stagnant? Perhaps they're insistent on making that "one extra pass" and that's why they're failing on the man-advantage. Or maybe they're just suffering from some really, truly awful luck.

More likely, it's something in between.

Here's a look at a stat chart from Extra Skater that has the Sharks as the number one team in terms of Fenwick differential ([shot attempts - blocked shots] - [opposing team shot attempts - blocked shots]) on the power play this season. As Patrick D. demonstrated in the offseason, a team's 5-on-4 Fenwick rate is a better predictor of their future 5-on-4 production than their current 5-on-4 production.

You can see on that chart that the Sharks are shooting at a rate of 1.44 Fenwick per minute. That's pretty darn good; but it might not surprise you to find they're not quite hitting that mark this calendar year. In 151 minutes of power play time in 2014, the Sharks have just 132 fenwicks. It doesn't take a math genius to find that they're now getting less than one unblocked shot attempt per minute (.875 to be precise).

A brief reminder that we're looking at arbitrary endpoints picked because humans like to sort things into manageable groups. We sort things based on when the new year started because that's what we do - there's no significance to January 1 and to say otherwise is intellectually dishonest. That being said, the power play is generating shots at a worse rate now than it was previously and that, presumably, is having an impact on the power play's poor production.

As an ancillary point to that: power play percentages are a useless way to measure the success of a power play, particularly over a short period of time (or even over one season). The sample size is too small for those numbers to have any significance, so I don't care that the Sharks are 9 percent (or whatever it is) on the power play since February.

Here's another look at the rate the Sharks put up fenwicks over the course of the season. This is a chart with a rolling average of the Sharks' fenwick differential per 60 minutes. 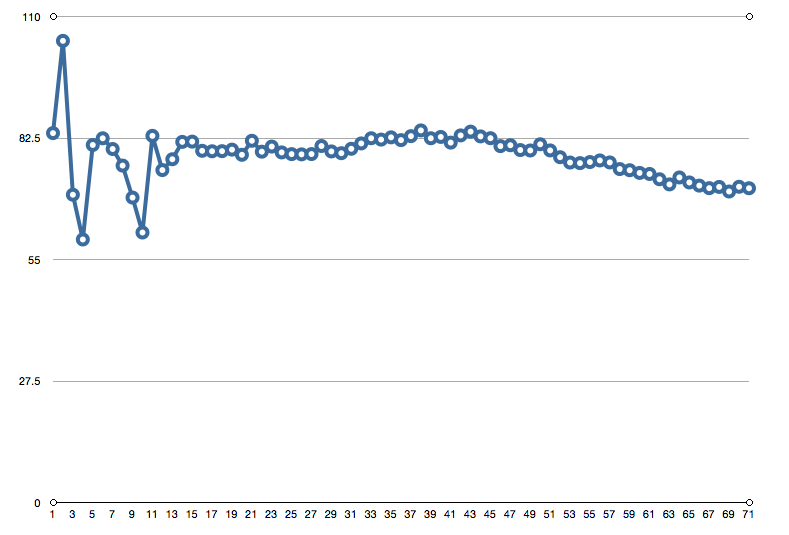 The rate starts to tail off around game 45 and (hopefully) bottomed out around game 67; that puts this slump's genesis just before the start of the Olympic break. They aren't generating as many shots on the power play now as they were at the beginning of the season -- this is hardly breaking news. But they've also been hamstrung by some bad luck which makes this slump seem even worse than it has been.

San Jose is ranked 27th in shooting percentage on the power play this season (9.5 percent). That's better than just the Vancouver Canucks, Florida Panthers and Carolina Hurricanes. For a reference point the Washington Capitals are shooting 14.7 percent on the power play. Last season, the Sharks shot 12.4 percent better on the powerplay. That 3 percent difference probably has a lot to do with why the Sharks (seem) to be scoring more goals short handed than on the man advantage.

Why have the shots dropped off? That's a legitimate question without an obvious answer. My best guess is that the Sharks are going through a slump and will eventually shake it off. This is still one of the best power plays in the NHL, and as long as it wakes up before the playoffs start, San Jose will be in good shape.