The Sharks clinched another playoff berth, but they did it in a shootout loss to the Calgary Flames.

The good news: The Sharks are going to the playoffs!

The bad news: They lost in a shootout to the Calgary Flames.

Despite going to the shootout again, the Sharks put in a strong performance in the odd number periods tonight. They outshot the Flames 34-27 and led in Fenwick 52-34. Observe the chart. 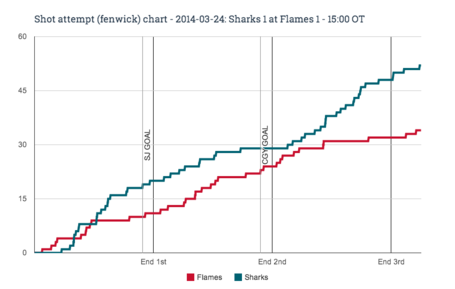 Hoo boy that's a lot of fenwicks for the Sharks. But fenwicks don't win games, goals win games, and the Sharks only scored once. It was a James Sheppard tally at the end of the first period that gave San Jose their one and only lead of the night.

Stalock made a pretty good save midway through the second and the Sharks were able to scramble it out of harms way to keep the Flames off the board.

The lead lasted nearly 20 minutes before Joe Colborne tied things up after a beautiful play from the Flames. Some nifty passing in the Sharks' zone gave Colborne a wide open net and he took advantage. The Sharks put on a clinic in the third period, outshooting the Flames 10-5 in the final frame. Karri Ramo stood tall as he stopped 33 of the 34 pucks thrown his way.

Stalock was similarly impressive, as he made 26 saves on the night; but the Sharks couldn't convert on their two power play chances or 33 of their 34 shots to squeeze a second goal out of this game. Now they will try to avoid making their two game losing streak a three gamer as they head into Edmonton tomorrow.