By the numbers: Game 73 vs. Calgary

Share All sharing options for: By the numbers: Game 73 vs. Calgary 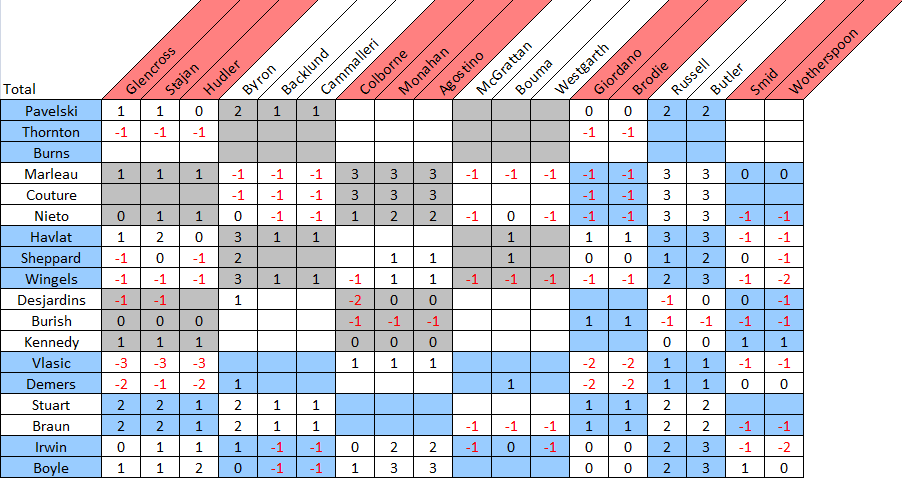 Todd McLellan commented after the game, "We were like a yo-yo, I thought. We were very good in the first, and had a pretty successful formula going. A good game plan, and executing it. In the second, I said to our guys we were like lab rats. We wanted to try and new way and see if it would work, and obviously it didn’t. In the third, we got back to it, but we wasted 20 good minutes turning pucks over and playing in our end." The scoring chances certainly bear that out as the Sharks had a wide edge in first period scoring chances before being outchanced by a similar margin in the second. By eye, it seemed like the team's fortunes changed early in the third period when Joe Thornton exited the penalty box and found himself on the ice with James Sheppard and Brent Burns, who had a strong shift together. That line stayed together for the remainder of regulation while Joe Pavelski, for the first time in months, was shifted into the third-line center slot and had an excellent period alongside Marty Havlat and Tommy Wingels. Hopefully the coaching staff opts to keep him there even when Logan Couture returns from injury because that was a very successful formula late in this game, probably even moreso than the chances alone indicate.

Calgary doesn't have a ton of structure through the neutral zone; as a result, some of the Sharks' best games of the season in terms of carry-in rate have come against the Flames. Last night was no exception - when Brad Stuart gains the blueline with possession of the puck on 3 of his 4 entries, the entire team is probably having a pretty good night. So while San Jose didn't have a wide edge in overall entries, they carried it in quite a bit more often than the Flames with Matt Nieto, Tyler Kennedy and Patrick Marleau in particular using their speed through the neutral zone effectively.

I've been critical of Brad Stuart's play throughout this season but credit where it's due: he looked really good last night, save for a minor blunder or two, and the numbers back that up; zone exits are usually a point of struggle for him but he got the puck out successfully on 9 of his 10 attempts to and only turned it over from the defensive zone once. He and Justin Braun strung some strong games together prior to the Olympic break; perhaps that's a legitimate second pairing for the Sharks going forward.