By the numbers: Game 74 vs. Edmonton

Share All sharing options for: By the numbers: Game 74 vs. Edmonton 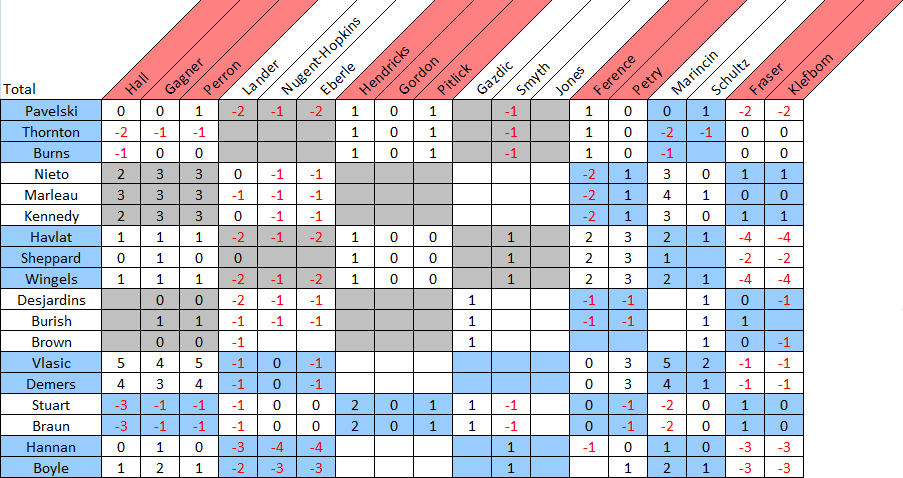 Edmonton jumped on a Sharks team that was on the ice against Calgary less than 24 hours prior to puck drop early, registering the first seven scoring chances of this game before the Sharks presumably remembered they were playing the Oilers and settled things down. After that 7-0 run by the Oilers to open the game, they conceded the next seven chances en route to getting outchanced 21-6 the rest of the way. But to Edmonton's credit, they kept things fairly even at five-aside; it was the penalty kill that killed them, as they gave up an astounding 7 chances and 3 goals in just 2:52 of Sharks power play time.

Some of it was definitely a result of playing with a multi-goal lead for the entire third period but the Sharks dumped the puck in quite a bit against an Oilers team that isn't necessarily known for a lot of defensive structure. Fortunately, it didn't really seem to prevent them from generating the 5-on-5 offense they needed to win. On the bright side, I thought Matt Nieto looked terrific last night and these numbers support that as he entered the offensive zone with control on 6 of his 8 entries.

Not a great game for Dan Boyle on either side of the puck, as he turned it over on four of his twenty defensive-zone touches and wasn't terribly involved in the breakout. He and Scott Hannan were victimized by the Ryan Nugent-Hopkins line quite a bit. Jason Demers, who's really taken over Boyle's role as the primary puck-mover on the back end for the Sharks this season, had a really nice night as he successfully exited the zone on 7 of his 10 attempts including the breakout pass that led to Marty Havlat's second period goal.