Semyon Varlamov and unforced errors by the Sharks extended the Sharks losing streak to two games.

Share All sharing options for: Sharks crushed by Colorado PDOs

The Sharks took another step towards the inevitability of a first-round matchup with the Los Angeles Kings today as they dropped a 3-2 game to Semyon Varlamov and the Colorado PDOs.

San Jose dominated the game...with the exception of the opening 10 minutes. Colorado opened the scoring with a Paul Stasny wrister that squeaked under the right pad of Alex Stalock. Joe Pavelski gave Stasny too much space to work near the goal-mouth and the Sharks were chasing after just 1:33 of play. Captain America tied the game at 1-1 just two minutes later, but the Sharks weren't quite done hecking up this period.

Dan Boyle tried to bat down a puck with his hand while the Sharks were on their second powerplay of the night, but he fanned and it glanced over to Cody McLeod as he entered the Sharks zone. He was able to beat Stalock five-hole and give the Avalanche the lead back.

From this point forward the Sharks were the better hockey team. As usual, we refer to the Fenwick chart from our good friends at Extra Skater dot com. 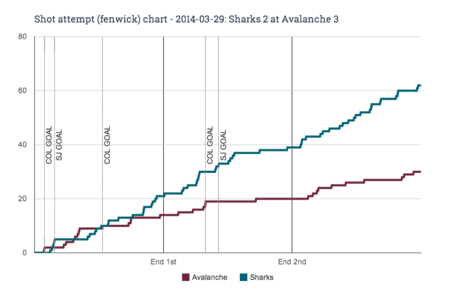 Varlamov played a hell of a game tonight to go along with having a phenomenal season*. He's a huge factor in the Avalanche going from 29th in the league last year to a potential division winner this year. This game, for me, illustrates the difference between a bad loss and just a regular old "that's hockey" loss. The Sharks were the better team tonight and they lost. It's too bad, particularly because this puts the division all but out of reach, but if they play like this in the playoffs, they'll at least make it seven games in the first round. Optimism!

*Minus the part where he was accused of assaulting a woman. Right. So.