By the numbers: Game 62 vs. New Jersey

Share All sharing options for: By the numbers: Game 62 vs. New Jersey 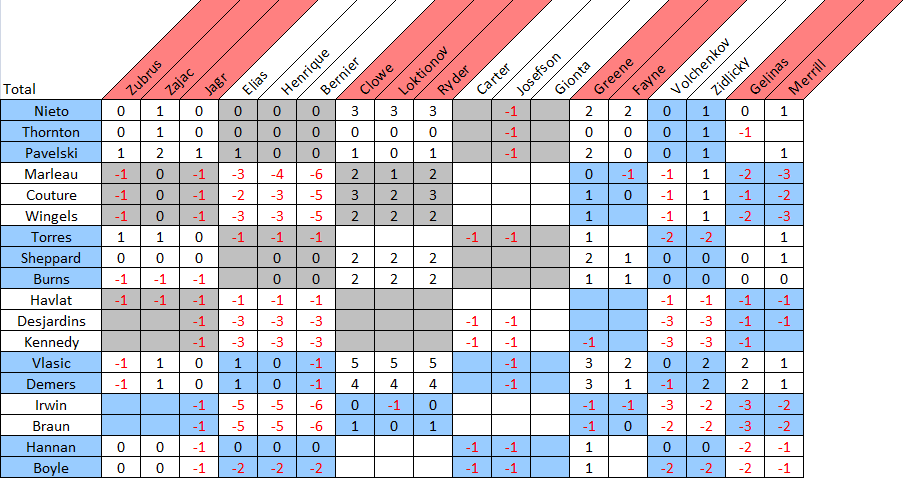 The only newly-constructed line that won its matchups across the board was the combination of Matt Nieto, Joe Thornton and Joe Pavelski, who also scored the game-winning goal. The Couture line and Irwin/Braun defense pairing had a particularly rough go of it against the Devils' second line, all of which added up to the Sharks being outchanced 16-12 (14-11 at even-strength) by a team that doesn't tend to generate much offense. Despite the win, this probably isn't the way Todd McLellan wants his team to play from a defensive standpoint and I'd expect changes to the lineup, line combinations and defense pairings for tomorrow's game against Carolina.

Usually, when you force an opponent to dump the puck in on 57% of their attempted entries into your defensive zone, you're going to severely limit their chances to score. That obviously didn't happen in this game, which probably speaks to how sloppy the Sharks were in their own end (and the fact that the Devils, systemically, tend to favor dump-and-chase hockey and have set plays designed to create offense from it).

Still, a 53% controlled entry rate for the Sharks is impressive stuff against an elite defensive team. I never thought I'd be excited to see Raffi Torres get more ice time but it'll be interesting to see how the team uses him as he becomes healthier; he's been brilliant in limited duty so far. Matt Nieto looked like the best Shark forward on the ice all game long and these numbers, specifically the amount of shots the team generated from his entries, certainly back that up.

By eye, and by basically every statistic in this post, Matt Irwin had a dreadful game. New Jersey outchanced San Jose 7-1 when he was on the ice at even-strength and the zone exit data suggests a lot of that was due to Irwin's struggles in his own end. He wasn't able to successfully advance the puck into the neutral zone on any of his 16 defensive-zone touches and turned it over five times to boot. It's anyone's guess as to when Brad Stuart will be healthy again but it's pretty safe to say Irwin will be the one coming out of the lineup when he is.