By the numbers: Game 76 vs. Colorado

Share All sharing options for: By the numbers: Game 76 vs. Colorado 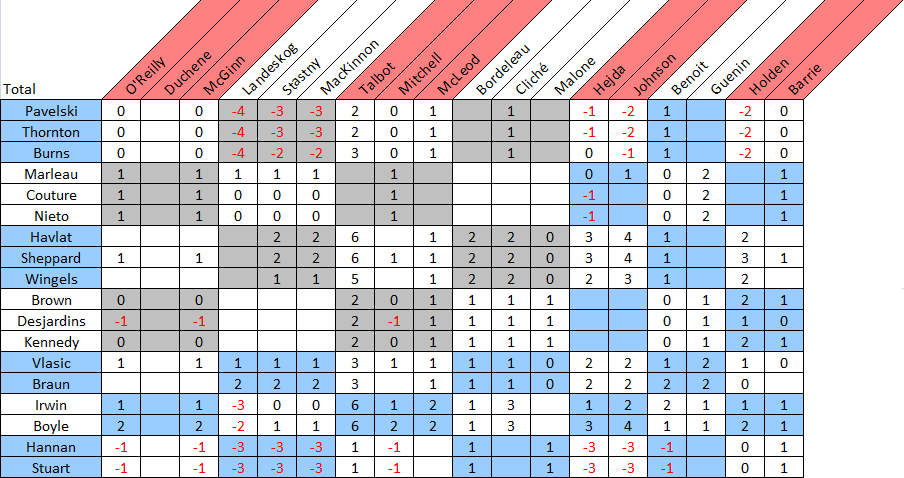 The scoring chances don't tell much different a story than the one you saw unfold if you watched this game. San Jose looked listless early on before dominating the game's final two periods but that shaky start was enough to sink them. It's certainly a disappointing loss in that they needed these two points to keep their division hopes alive and they didn't quite look ready to play at the early drop of the puck but the only reason the Sharks' comeback effort fell short was Semyon Varlamov (and some unfortunately missed nets).

It's sort of impressive how awful Scott Hannan and Brad Stuart are when paired together. It was that way earlier in the season and Jason Demers' illness meant we were treated to that tandem again; the Sharks were outchanced 4-1 at evens when those two were out together and outchanced the Avalanche 16-6 when they were on the bench. Playing in front of Stuart and Hannan quite frequently was definitely part of the reason the Thornton line struggled to generate much in the way of scoring opportunities but a terrific game by Colorado center Paul Stastny matching up against them contributed as well.

It's not exactly a secret that Colorado has heavily relied on Varlamov to get them to where they are. They're a complete mess defensively as they allowed nearly one shot against every time the Sharks gained the blueline with control of the puck; that's absurdly high and while I doubt they're usually quite that bad defending against the rush, their high shots against total doesn't lie. Even more concerning might be how easy it is for forechecking forwards to force turnovers on their defensemen, which was happening down low all game long. Tyler Kennedy spearheaded a surprisingly effective game from the fourth line; he's a much more useful player than Adam Burish so it's good to see him lock down a spot in the lineup in Burish's absence.

San Jose didn't touch the puck all that often (relatively speaking) in the defensive zone in this one because they just didn't spend much time there. Vlasic and Boyle both had nice games catalyzing the breakout for their respective pairings while rookie winger Matt Nieto was benched for a few shifts in the second period presumably in part due to a turnover-filled game when attempting to exit his own zone.