After a sobering defeat to the Penguins in December, the Sharks will have a chance to even the season series up tonight.

Share All sharing options for: Sharks vs. Penguins: Let's try that again

The Sharks' loss to the Penguins in early December was a lot closer than it felt. Even before the Penguins ripped open a four goal lead in the second period the game was close. Pittsburgh was the better team, but the Sharks were in the game more than it appeared at first look. 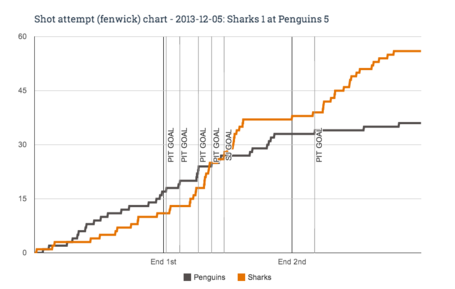 San Jose really poured it on in the third period, but the Penguins scored the lone goal in the final frame. Antti Niemi got the hook after the second period, he faced 27 shots and stopped 23. Alex Stalock didn't fair a whole lot better as he allowed a goal on one of just three shots he saw. It wasn't a red-letter day for the Sharks goaltending, nor their offense, for that matter.

The Sharks took 45 shots on goal and only scored once against Marc-Andre Fleury. These Results Are Not Typical.

Last time these teams met it was without Raffi Torres for the Sharks and Evgeni Malkin for the Penguins. Yeah, that probably had more impact on Pittsburgh than it did on the Sharks.

Since these teams met in early Decemer, the Penguins have seen their Fenwick numbers slide precipitously. They went from an impressive 54.9 on December 5 to a merely average 51.1 today. That puts them 11th in Fenwick, and their Corsi rate of 49 percent lands them smack dab in the middle of the pack. 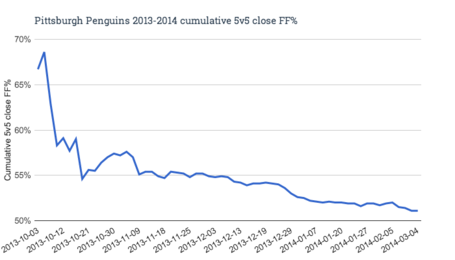 Pittsburgh added Marcel Goc at the tail end of the trade deadline, and I expect he'll find a spot in their bottom six tonight. The Sharks did nothing to shore up their defense concerns before the trade window shut, so if this is to be the year for the Sharks, they'll be doing it with the group we've seen the past 60+ games. There are worse things in the world.

After a discouraging performance against the Carolina Hurricanes, San Jose has a tough task in rebounding against a darn dangerous team. The good news is their schedule gets even softer after the Penguins game, with the Canadiens and Maple Leafs coming to town over the weekend.