By the numbers: Game 64 vs. Pittsburgh

Share All sharing options for: By the numbers: Game 64 vs. Pittsburgh 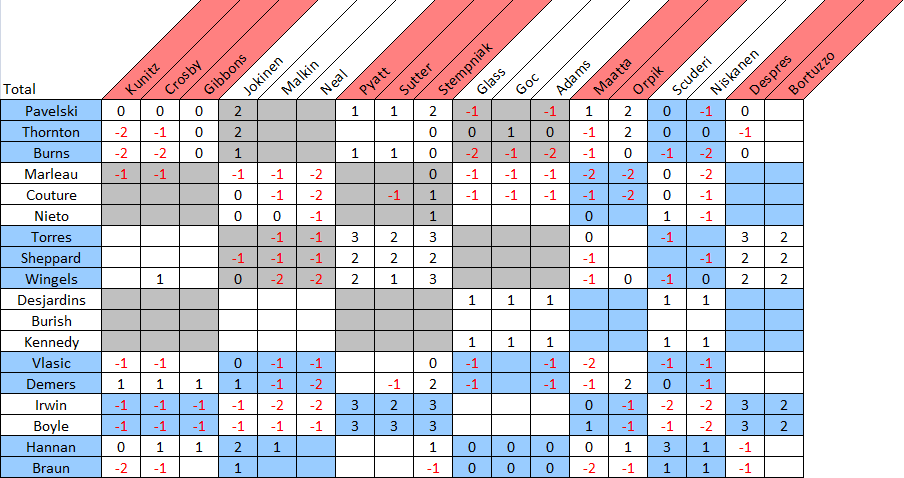 Generating eight shots in eight minutes of power play time is the performance of an upper-echelon 5-on-4 team. Generating eight scoring chances in eight minutes, as the Sharks did on Thursday night, is extremely impressive. That was the best the top unit has looked since the team's first-round sweep of Vancouver almost a year ago. More of that down the stretch and into the playoffs would be welcome. There weren't a ton of chances at even-strength in this game so it's hard to put too much stock into the individual numbers but I think the Couture line legitimately struggled five-on-five; they were matched up against Evgeni Malkin and he got the best of them. I love Matt Nieto but I don't think playing his off-wing on that line is the best place for him.

Just a monster game for Joe Pavelski on zone entries, in addition to almost every other facet of the game. Ironically, the one area I thought he struggled was the power play where the remainder of his unit was downright dominant. A 65% overall controlled zone entry rate is incredibly high given that the league average is around 48% and is likely the Sharks' best performance in this category all season. If the Sharks can play like this in the neutral zone on a consistent basis, there's no stopping them.

San Jose didn't spend a lot of time in the defensive zone in this game; credit their forwards for providing options and puck support to facilitate quick breakouts. James Sheppard in particular had a nice, understated game as the third-line center getting the puck moving in the right direction. Matt Irwin and Dan Boyle's shot differential numbers don't look great from this game but they did acquit themselves well in terms of exits, especially Irwin considering his recent struggles.