San Jose welcomes the Canadiens to SAP Center for the first time since 2011.

Okay, that should pacify the francophone police de Montreal for now. It was nearly five months ago that these teams met and the time since has been much kinder to the Sharks than it has to the Canadiens. That may come off as odd, given that the Canadiens are in second place in the Atlantic and have 77 points; but Montreal has "established themselves" as one of the worst possession teams in the NHL. 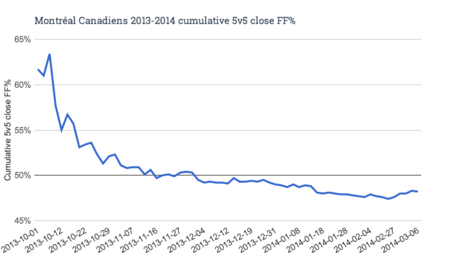 After the Sharks/Canadiens game in October, Montreal's Fenwick for sat at 52 percent (albeit too early for that number to mean anything). It's now down to 48.8 percent. Top tier goaltending has kept Montreal afloat, but it was Antti Niemi who posted a shutout in their last meeting. He's expected to get the start again tonight after an okay performance against one of the league's top offenses on Thursday.

Unfortunately for the Habs, Carey Price has not seen a second of game time since winning that stupid medal in those stupid Olympics. Peter Budaj has posted a .911 save percentage this season in relief of Price. Here with more on the state of the Montreal Canadiens is Eyes On The Prize writer Laura (on Twitter @TheActiveStick).

Their record is a little deceptive, because their Fenwick is awful. They had 15-20 games at the beginning of the year when it was dominant, and then it basically cratered for the rest of the season until a few games ago. It kind of stabilized a little bit, however, the problem is the coach and the personnel on D.
Most specifically, Douglas Murray (thanks, by the way) ever being allowed to play, and then general ice time and management of the players.
So we've been waiting for the other shoe to drop, because it's been pretty clear that this coach and his system are not using the players effectively, in any sense of the word, and Carey Price and luck are keeping them in games they should not be in.

In a perfect world, Niemi will post a shutout, Joe Thornton will (figuratively) break Douglas Murray's ankles while scoring four goals and the Sharks would FINALLY gain ground on the Ducks, whose PDO is about to surpass the GDP of a few small countries. But in the world we're currently living in, just one of those things will do just fine. .