By the numbers: Game 65 vs. Montreal

Share All sharing options for: By the numbers: Game 65 vs. Montreal 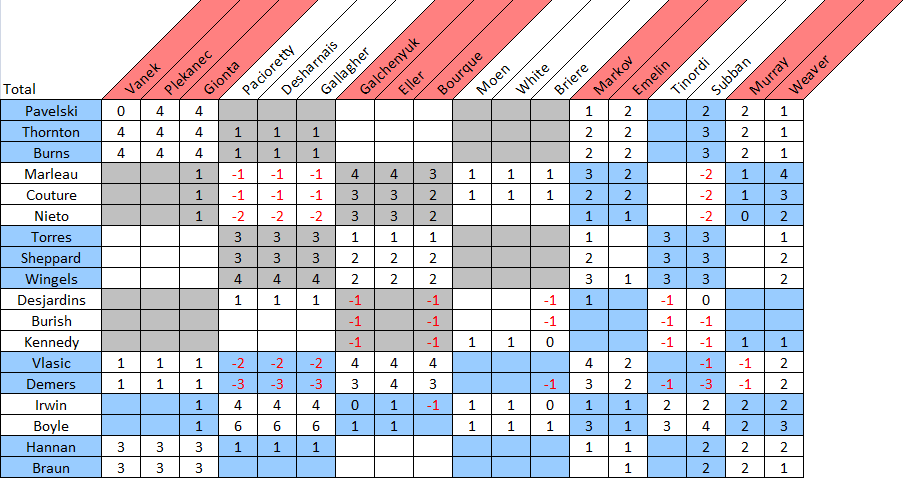 There was a time earlier in the season when the Sharks were routinely criticized for dismal second period efforts (although I argued at the time, and still would, that it was more a result of them sitting on the sizable first-period leads they were opening up rather than any type of shift in strategy endemic to the second period) but, lately, they've been feasting on opponents in the middle frame. That was the case again last night as the Sharks lit up the Canadiens to the tune of a 13-2 scoring chance advantage in the second. It was good to see Antti Niemi get the shutout but, frankly, he wasn't asked to do a whole lot; San Jose allowed just two scoring chances per period for a total of six.

On the other side of the ledger, six of the Sharks' eighteen scoring chances in this game came off the stick of Tommy Wingels, who I thought was the best player on the ice. It's a huge bonus that the Sharks have been able to get the production out of him that they have this season; icing a third line of Raffi Torres, James Sheppard and Wingels last season would have probably been a disaster but the development of the latter two has allowed that line to not only hold its own but contribute offense.

Both teams carried the puck into the offensive zone on about the same percentage of their entries; the difference was the Canadiens entered the offensive zone in any fashion 25 fewer times than the Sharks did. Especially considering San Jose led for nearly the entire game and held a multi-goal lead for more than half of it, that's a pretty dominant performance in the neutral zone and a big reason Montreal generated next-to-nothing offensively.

By eye, the Marleau/Couture/Nieto line was flying last night and the zone entry numbers back that observation up; Couture entered the offensive zone with control on all five of his entries while Marleau went seven-for-eleven in that department, generating a crapload of offense (not the least of which was Nieto's one-timer goal from the slot) with his controlled entries.

If James Sheppard could take fewer minor penalties, he'd be the perfect bottom six forward. He seldom makes the wrong play in any area of the ice, including the defensive zone from where he carried the puck into the neutral zone on seven of his thirteen touches last night and successfully passed it clear on two others. On the whole, the Sharks exited the defensive zone on 65% of their attempts to, which is a pretty solid recipe for spending as little time in your own end as possible.

Not to harp on Adam Burish but he was the only Shark to finish with a negative scoring chance differential last night, the only forward to not generate a single zone entry, either turned the puck over or iced it on three of his five defensive-zone touches and finished with the lowest Corsi% on the team. I'm not entirely sure he's done anything since signing in San Jose to prove he's much more than a good AHL player these days. As much as I wouldn't expect Marty Havlat to be all that effective with Andrew Desjardins and Tyler Kennedy as his linemates, I'd rather have him in that spot than Burish at this point.