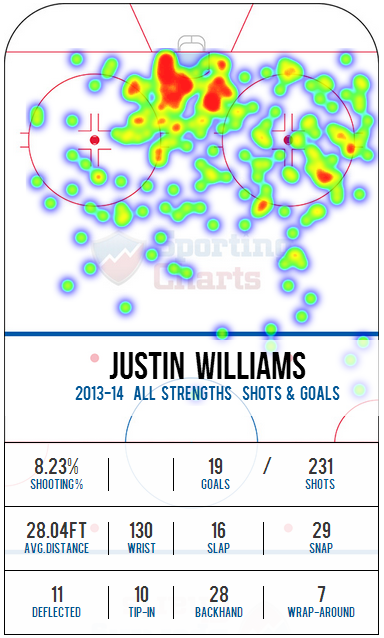 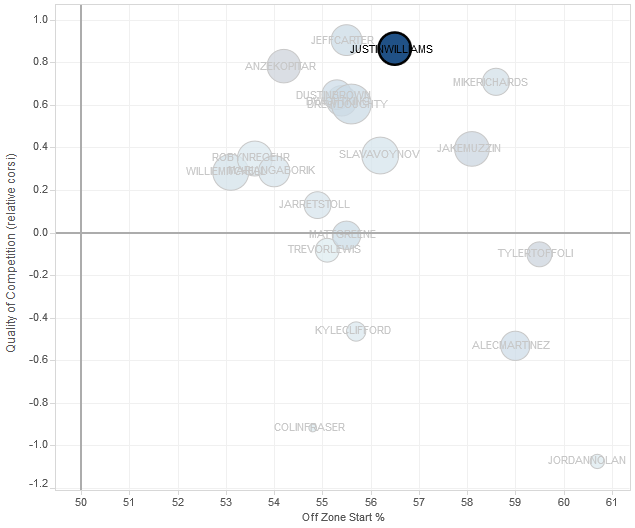 Why you should know who he is: While Anze Kopitar is the straw that stirs the drink for the Kings up front, Justin Williams is right there with him. He isn't the fastest or flashiest player but he just might be the smartest; Williams rarely makes mistakes with or without the puck and the end result is him or one of his teammates having the puck on their stick the majority of the time he spends on the ice. From 2009 to 2013, no forward in the NHL saw their club earn a greater proportion of on-ice 5-on-5 shot attempts than Williams. He's a puck possession demigod and isn't bad offensively either; over that same span, only 32 forwards in the league averaged more 5-on-5 points per 60 minutes. If he was at all a threat on the power play, Williams would probably get his due as one of the most effective two-way forwards in hockey. It isn't a coincidence the Kings made the playoffs for the first time in eight years during Williams' first full season in L.A.

Williams currently skates on the Kings' top line with Kopitar and trade deadline acquisition Marian Gaborik and they've been deadly together; with that trio on the ice, L.A. has outscored opponents 13-6 and outshot them (including misses and blocks) 232-141. Ultimately, you should already know who Williams is unless you were able to successfully scrub last year's seven-game series between the Sharks and Kings from your memory (in which case, congratulations!); he was the one who ended San Jose's playoff hopes with both L.A. goals in the deciding contest.

How the Sharks can stop him: Especially when Drew Doughty isn't on the ice, Williams is critical to the Kings' breakout. He's a master at creating a slight delay against forechecking pressure that opens up passing lanes into the neutral zone to ensure one of his linemates can carry the puck in the right direction. The Sharks need to be aggressive in denying Williams time and space to execute controlled breakouts from the defensive zone, primarily by instructing defensemen to pinch in order to keep loose pucks in their attacking end as the San Jose blueline has done with success all season.

Also, the knock on Williams earlier in his career—and the reason Dean Lombardi was able to acquire him from Carolina for pennies on the dollar at the 2008 trade deadline—was that he couldn't stay healthy. He hasn't missed a game since 2011 so that hardly applies anymore but the Sharks could certainly stand to be as physical against him as possible; they'll have ample opportunity to do so as, when Williams is on the ice, he usually has the puck. As much as I'll be cringing every time Brad Stuart is on the ice against him (mostly because that will also mean Brad Stuart is on the ice against Anze Kopitar) the veteran defenseman provided a pretty good blueprint for how to handle Williams last spring: