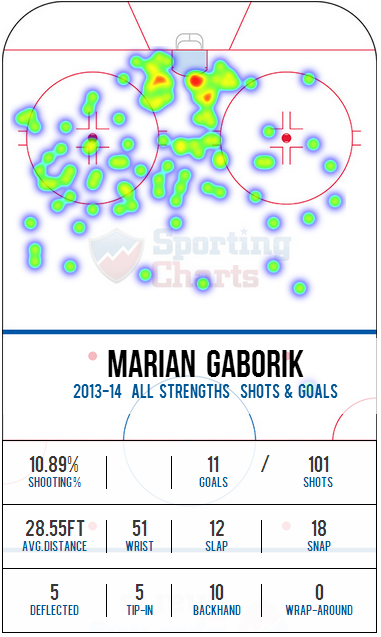 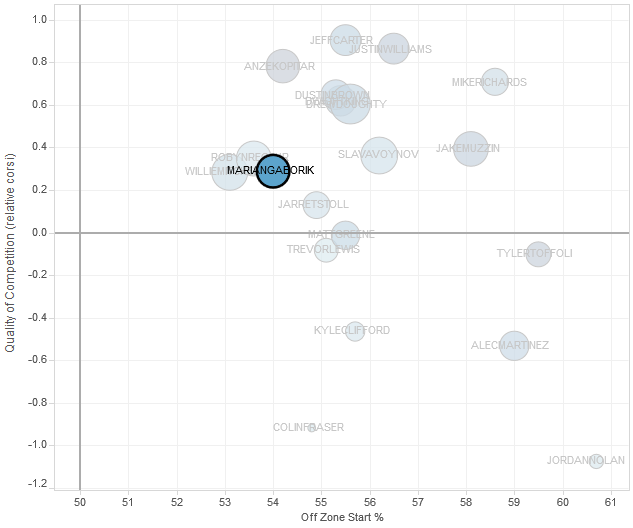 Why you should know who he is: Because the Los Angeles Kings dealt scraps to Columbus for a speedy goal-scoring winger at the trade deadline. If history is any indication, that sort of move doesn't work out so well for their playoff opponents. In all seriousness, it's eerie how similar the Kings' improvement in offense since adding Marian Gaborik has been to their offensive rise after acquiring Jeff Carter two years ago. Via Adam Gretz: 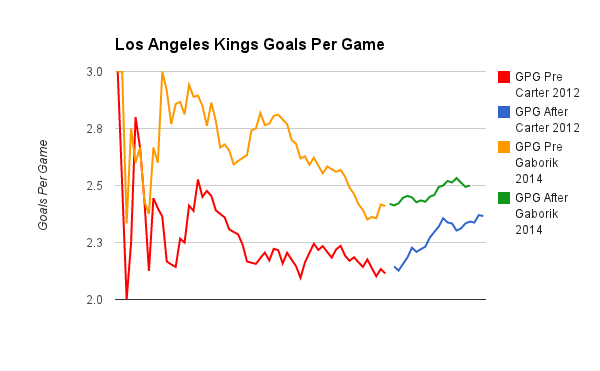 The Kings' Achilles' heel under Darryl Sutter has been their offense. They're a suffocating puck possession team that allows next-to-nothing defensively but they struggle to manufacture goals. That hasn't been the case since Gaborik finally gave them the scoring-line left wing they've been seeking for Anze Kopitar his entire career. With Gaborik on the ice at even-strength during his 19-game stint with L.A. to close the season, the Kings scored on 9.3% of their shots and the team as a whole shot 7.5% over that span, both of which are absurdly high percentages for a team that routinely languishes near the bottom of the league in shooting percentage. Gaborik slotting everyone into their proper roles also led to an uptick in possession for an already dominant possession team; the Kings controlled 59.2% of unblocked shot attempts with the score close when Gaborik was in the lineup and they're carrying the puck into the offensive zone more frequently. Injuries have hampered Gaborik over his career, and he isn't the perennial 40-goal threat he once was, but he's fit like a glove on L.A.'s top line with Anze Kopitar and Justin Williams and, along with Carter, is one of the offensive weapons the Sharks will need to keep an eye on all series long.

How the Sharks can stop him: As a member of the New York Rangers, Gaborik faced the Washington Capitals in the playoffs on almost a yearly basis. Here's what Caps shutdown defenseman Karl Alzner told the Washington Post about going up against the Slovak winger:

"Gaborik’s obviously incredibly fast. Sometimes he hangs up above the blueline, or close to the blueline, and just races for the puck and he’s tough to beat," Alzner said. "He can shoot the puck too, which is kind of a deadly combination because coming down the wing, stopping up and taking a wrist shot a lot of guys can’t score there but he can.

"For us it’s all about gaps against him and it gets difficult because you don’t want to get too close and let him go by you," Alzner continued. "So that’s where we come in and try to make as best of a hockey read as we can and hope it works out."

Gaborik is no longer as fast as he was when this quote was given but he's still incredibly shifty and, even though he's at less liberty to do so in Sutter's system, still races to the blueline in search of a stretch pass at the first sign of a change of possession in the defensive zone. It's all about gap control when defending against Gaborik; the Sharks need to play him tightly in the neutral zone and prevent him from gaining the line with control. Not only can he beat you with a laserlike release from the top of the circle, he's an underrated playmaker capable of finding either of his uber-talented linemates for a scoring chance. And even though Gaborik is no longer a burner, the Sharks need to limit the amount of ice time slower defensemen like Brad Stuart, Scott Hannan and Matt Irwin spend against him. At least on home ice, Gaborik should be seeing a steady diet of Marc-Edouard Vlasic and Jason Demers, blueliners who can pressure Gaborik at the blueline but are also mobile enough to pivot back if he's able to beat them.