Niemi vs. Quick: How concerning is the goaltending matchup?

It's still uncertain who the Sharks will go with in Game 1 but we examine the disparity (or lack thereof) between probable starters Antti Niemi and Jonathan Quick.

Share All sharing options for: Niemi vs. Quick: How concerning is the goaltending matchup?

With less than 36 hours remaining before the puck drops on Game 1 of the Sharks and Kings' first-round series, we still don't know for sure who will start in net for San Jose. As well as Alex Stalock played in a backup role during the regular season, you can likely bet on Niemi leading the Sharks onto the ice tomorrow evening, the primary reason a lot of people are going to bet on the Kings to win this series. Niemi struggled down the stretch in the regular season, posting a .899 SV% in his final ten starts following a 41-save shutout of the Rangers. After earning a nomination for the Vezina Trophy last year, Niemi's 2013-14 season was easily the worst of his NHL career as his overall .913 SV% ranked 29th among 51 qualifying goaltenders while his .918 even-strength SV% ranked 35th.

Jonathan Quick, who will certainly be Los Angeles' Game 1 starter, is widely perceived as one of the best goaltenders in the NHL; a rock upon which the Kings can rely, in direct contrast to an at-times shaky Niemi who can be prone to letting in unpalatable goals. That's the narrative, anyway. The problem is that it isn't exactly borne out by the facts. Here's a comparison of Quick and Niemi's cumulative regular season save percentages since Niemi broke into the league with the Chicago Blackhawks in the 2009-10 season: 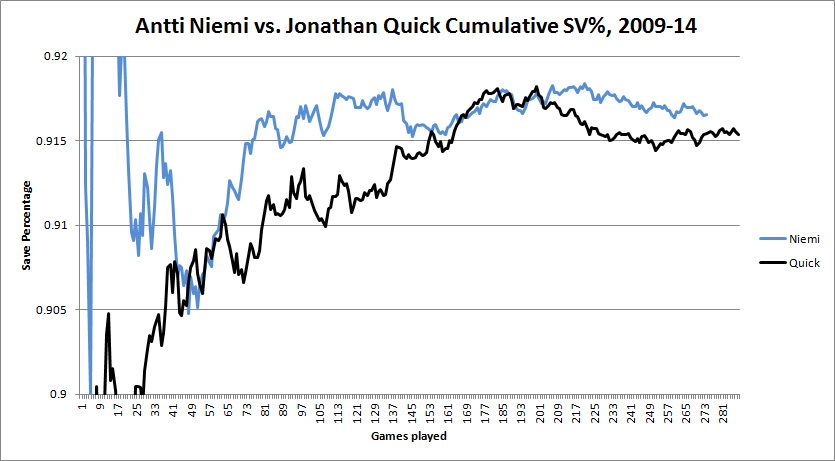 Apart from brief flashpoints at the start of Niemi's Sharks career and during Quick's superlative 2011-12 season, Antti Niemi has always been the (slightly) superior goaltender at stopping pucks throughout this span. Over the full 275-game sample, Niemi clocks in at a 0.9166 SV% compared to Quick's 0.9153 in the 288 regular season games he's appeared in since 2009. Granted, this analysis isn't entirely fair to Quick since his best moments have come in the playoffs but even lumping in postseason performance leaves Quick with a .9176 SV% since 2009 compared to Niemi's .9152, with the caveat that Quick's teams have gone significantly deeper than Niemi's the past two springs which have featured the highest average playoff save percentages on record.

Regardless of how you slice the data, it becomes clear pretty quickly that there isn't a significant difference in puck-stopping ability between these goaltenders. Even this past season, the worst of Niemi's career and a huge bounceback year for Quick after he posted a putrid .902 in the shortened 2013 campaign, Niemi's save percentage was only .002 worse than Quick's. The point here isn't that Niemi is an elite NHL goaltender; it's that Quick isn't one. His performance hasn't really merited his inclusion among the upper echelon of this league's goalies but he's almost always in that discussion. In reality, Quick is a lot closer in talent level to Niemi than he is to the likes of Tuukka Rask, Henrik Lundqvist and Roberto Luongo.

And yet a persistent storyline heading into this series is that Los Angeles' edge in goal could be insurmountable. If I had to hazard a guess, I'd say Niemi's aesthetically unpleasing style in net, the (correct, albeit somewhat irrelevant) notion Quick played a bigger part in his team's Cup run than Niemi did in his and a conflation of the Kings' defensive prowess and Quick's goaltending abilities are the major reasons this narrative isn't dead and won't be dying anytime soon.

Niemi doesn't "look" like a starting goaltender. He largely eschews the technically sound brand of goaltending featured in most NHL creases; he has poor lateral mobility, an unspectacular glove hand and an uncommon slouched style of positioning that seems to make him more susceptible than some other goaltenders to elevated shots. It isn't surprising that fans and analysts are quick to turn on him because when he lets in goals he usually looks ugly in doing so. Quick is unorthodox, too, with a tendency to scramble in the crease, but he's also an extremely athletic goaltender and the viewing public, media and general managers alike tend to remember the spectacular saves from that type of goalie rather than the goals they let in due to being out of position; just look at how long it took opinions to shift on Marc-Andre Fleury and Ondrej Pavelec. There's certainly a place for subjective evaluation of goaltenders and I'd be entirely open to the argument that Niemi's numbers would take a hit playing behind a defense liable to leave him exposed more often. But, at the end of the day, he has stopped the puck at a rate that compares very favorably to his peers—certainly to Jonathan Quick—and has done so over a large sample size. That's really all that matters.

Los Angeles won the Jennings Trophy this season as the team that allowed the fewest goals in the NHL and I think there's a tendency among observers to think this, and the Kings' numerous other defensive accomplishments in recent history, was a byproduct of Quick. It wasn't. Under Darryl Sutter, L.A. has been one of the best shot suppression teams in the league; only New Jersey allowed fewer this season while only the Blues and Devils were better in that regard a year ago. This is why crediting goals-against average to individual goaltenders rather than teams doesn't make sense. Goalies have no control over how many shots they face (outside of the minimal impact made by rebound control or puckhandling), a huge driver of GAA.

Which isn't to say that save percentage is a flawless metric either, and analysts like Chris Boyle have done intriguing work in determining team effects on shot quality allowed, but at least it focuses on the one aspect of the game goalies can actually control: stopping the shots that get through to them. To argue that Quick is a significantly better goalie than Niemi despite their near-identical save percentages would require you to argue that the Kings are a significantly worse defensive team than the Sharks. Again, L.A. routinely gives up the fewest shots in the NHL and the location data suggests those shots aren't all five-alarm scoring chances. In fact, Quick's backups over the past two regular seasons have combined to post a .930 SV% over 1270 shots faced in comparison to Quick's .910 over that span. 1270 shots isn't all that significant of a sample size but if it indicates anything, it's that manning the Kings' crease is probably one of the easier goaltending jobs in the NHL. I'm not sure the argument that the Sharks have been better defensively in front of Niemi than the Kings have been in front of Quick holds any water.

Anything can happen in a seven-game series; Niemi could certainly continue to struggle as he did to close the season while Quick could kickstart another spectacular playoff run. But when trying to project future performance, it's always preferable to take into account a goalie's entire body of work rather than just Niemi's last ten games or Quick's most recent postseason. This isn't meant to be a biased screed tearing down Quick to assert the Sharks have an upper hand in this matchup. The Kings are the league's top puck possession team and boast a deadly one-two punch up front and on the blueline of the best forward in this series in Anze Kopitar and the best defenseman in Drew Doughty. There are plenty of reasons to be anywhere from nervous to terrified about the Sharks' chances of pulling this off. But the difference between Niemi and Quick is negligible, and not really one of them.