Dan Boyle's redemption could come in the playoffs

After a lackluster campaign, Boyle returns to the part of the season where he's always thrived.

Share All sharing options for: Dan Boyle's redemption could come in the playoffs

In his sixth season with the franchise for which he's the all-time leading scorer among defensemen, Dan Boyle had a disappointing year. He'd probably be the first to tell you that, too, considering what a frank assessment he gave of his play earlier in the season, admitting that he'd likely rushed his return from a concussion. That brain injury, the result of a horrific boarding penalty committed by Blues forward Maxim Lapierre, likely exacerbated the natural age-related decline that was already coming down the pike for the 37-year-old blueliner. Boyle finished the season with 12 goals and 36 points, his lowest output ever in a season where he's played 70 or more games but his struggles were about more than production; few and far between were the singular rushes, perfect stretch passes and power play brilliance that Boyle's tenure in teal will forever be associated with.

The great thing about the playoffs, though, is that everyone's slate gets wiped completely clean. Players who struggled in the regular season have a chance to redeem themselves while players who thrived for 82 games can easily end up wearing the goat horns over the following seven. It's all completely unfair and ridiculous but that's what makes it so fun. And if I was picking one Shark coming off a lackluster season with the chops to turn things around when San Jose begins its series against Los Angeles tomorrow night, it would be Boyle. Here's a look at the top 25 scorers in the Stanley Cup playoffs from 2009, Boyle's first postseason as a Shark, through 2013: 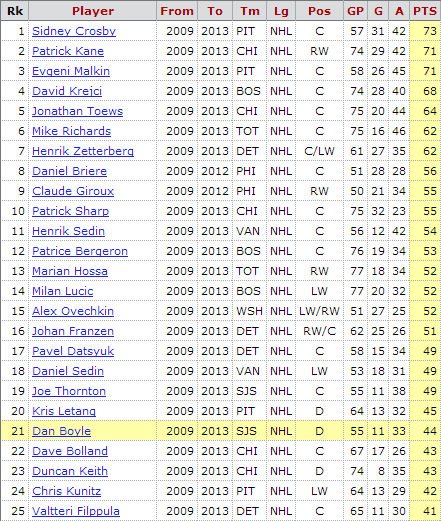 Smack dab in the middle of it all is Boyle, a defenseman, who's scored more points in the playoffs since joining the Sharks than star forwards like Ryan Kesler and Anze Kopitar have over that same span. When filtering by points-per-game, Boyle looks just as strong, overtaking Kris Letang to be the top blueliner in scoring rate over the past five postseasons. His 0.8 playoff points-per-game rate as a Shark would translate to a whopping 66 points in an 82-game schedule and trumps his 0.62 regular season points-per-game rate in San Jose. Very few players, let alone defensemen, are capable of producing at a higher level in the tighter-checking playoffs than the regular season. Boyle is one of those few. He's smart and elusive enough to escape coverage in the offensive zone, even when teams gameplan against him, as he did in Game 1 against Vancouver last spring to score what held up as the game-winning goal:

While Boyle's struggles were certainly real, part of what explains his diminished production in the regular season was the fact that the Sharks scored on just 5.7% of the shots taken when Boyle was on the ice at even-strength. Particularly for defensemen, that's a percentage that tends to regress to league average in the long run. If that regression takes place in the coming weeks, Boyle could be in for another monster postseason.

His role has been reduced (Boyle will likely begin the series on the third pairing with either Scott Hannan or Matt Irwin), he's coming off a down season and he's in the final year of his contract with the Sharks but Dan Boyle has always been able to get it done when it matters most. I'd expect this spring to be no different.