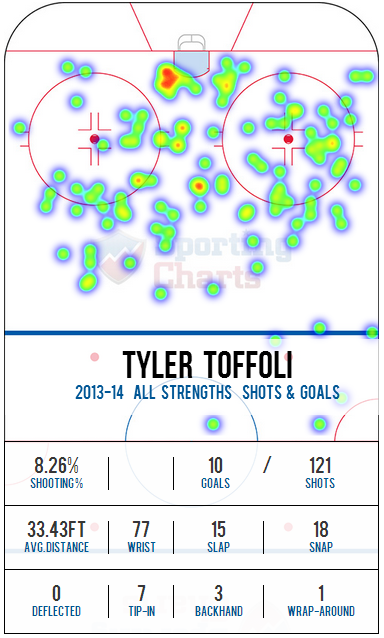 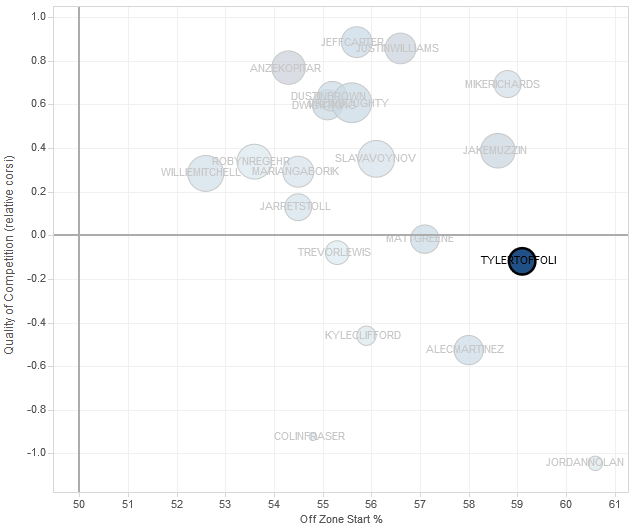 Why you should know who he is: Tyler Toffoli is more or less the only Brian Kilrea-coached Ottawa 67 in the NHL that Doug Wilson didn't draft. More importantly, he's the Kings' best young forward and was a thorn in the Sharks' side during their playoff meeting with Los Angeles last year as he set up the game-winner in a heartbreaking Game 2 and scored off an egregious Brad Stuart turnover in Game 3. He's been even better this season, his first full year in the NHL, scoring more 5-on-5 points per 60 minutes of ice time than any other King save Marian Gaborik and Anze Kopitar. Only Gaborik, Kopitar and Jeff Carter scored more 5-on-5 goals per 60. Thanks in part to sheltered usage and great linemates, but also due to his propensity for carrying the puck into the offensive zone, Toffoli finished 4th among forwards in the entire NHL in on-ice shot differential behind only Patrice Bergeron, Justin Williams and Kopitar. He's a very good player and a utility guy of sorts; he has the shooting talent to play with Anze Kopitar, the vision and neutral zone ability to flank Jeff Carter if he's moved back to center and the versatility to be the primary scoring threat on a third line with Jarret Stoll and Dustin Brown, where he'll likely start the series. Toffoli only scored twice in his final 24 games of the season but continued to generate shots at a healthy rate considering his ice time. He could be primed to break out in the postseason, which is obviously bad news for the Sharks.

How the Sharks can stop him: Not putting the puck on a tee for him in the offensive zone would be a start...

While the knock on Toffoli has always been his lack of speed (seriously, how did the Sharks not pick this kid?) he's a shifty player and great puckhandler who generates a lot of his offense in transition. San Jose needs to close tightly on him in the neutral zone and that requires an intelligent, committed backcheck by their forwards, something I really don't think James Sheppard has the awareness or chops to accomplish if he's forced to play center against this line (and it looks like he will be, at least to start the series). We've been harping on it all week but this is one of the major reasons the Sharks need Joe Pavelski at third-line center; to counter a very effective Kings third line of Brown, Stoll and especially Toffoli. If that trio gets to match up against Sheppard, they'll have a field day in the offensive zone.