Our final analysis and predictions for the Sharks/Kings series prior to tonight's Game 1 in San Jose.

We've reviewed the schedule, talked tactics, examined the field, highlighted important players, focused on the goaltending matchup and peeked at the opposing roster. Now it's time for us to lay down our predictions for the first-round series between the San Jose Sharks and Los Angeles Kings, set to finally begin at the Tank tonight at 7:30. 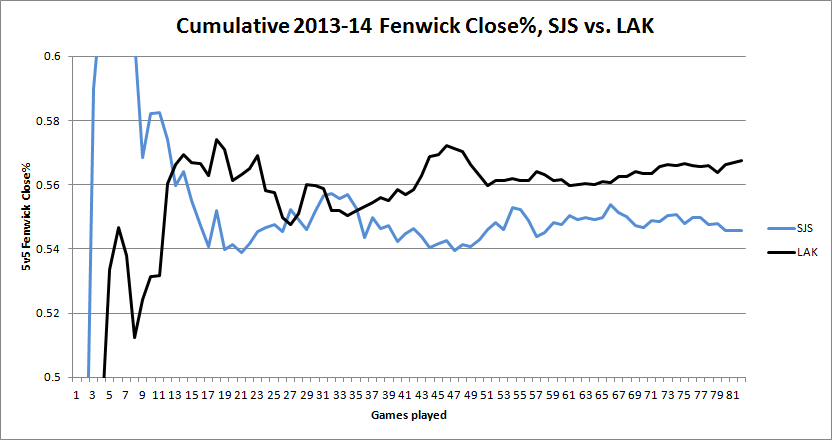 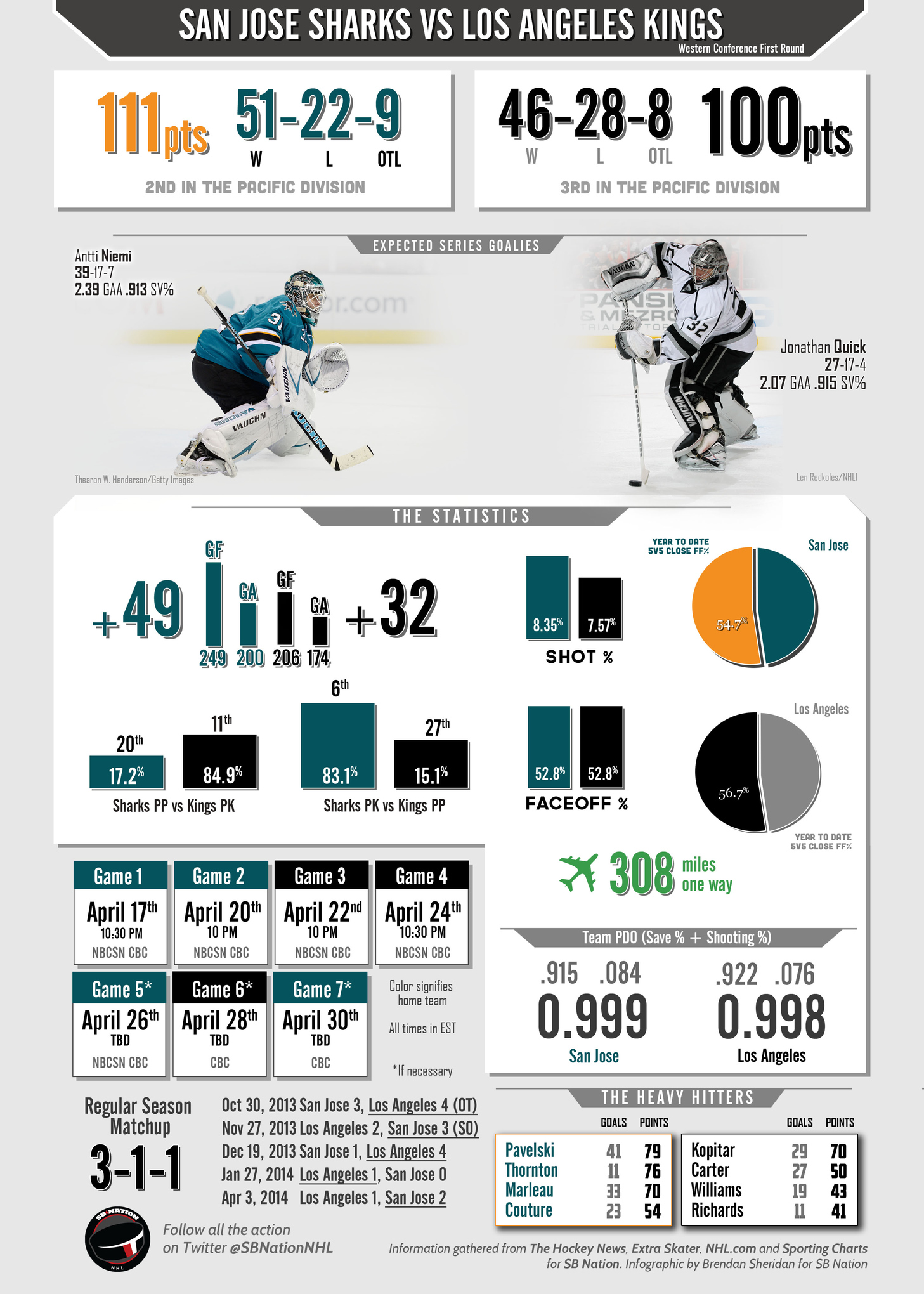 Patrick: Nerd-vana. The best Fenwick Close team versus the third-best. Both teams employ effective forechecks and fluid transition games. Neither team plays a significant amount of defense. This will be an end-to-end slugfest. Everybody's talking about us you guys (well, all the #fancystats people). L.A. plays a 2-1-2 split forechecking system that's built on crushing defensemen. The Sharks' D will need to move the puck quickly to avoid coughing it up deep behind the net and feeding great scoring opportunities. Please dear hockey gods, don't let the coaching staff send out the Hannan/Stuart disaster. Demers, Vlasic, Boyle (especially), and Braun must be able to exit the zone in this one or it will be over quickly. The Sharks will feast on the corpse of Robyn Regehr and he'll have a 100% target and 100% controlled entry against statline at the end of the series. Sharks in seven.

Jon W.: It's a little unfair the conference championship is happening in the first round. But we might as well enjoy it now. These are two of the very best teams facing off, with rosters that are relatively healthy. With the current configuration of the Sharks' bottom six, I could easily see the Kings stealing one of the first two games in San Jose. With their backs against the wall though, I think the Sharks will stick Pavelski back on line three and roll from there. James Sheppard (as 4th line left wing) scores the series clinching goal. Sharks in seven.

Mike: Dustin Brown does a knee-on-knee with Jonathan Quick's goalpost and tears his ACL. Sharks in four.

Jake S.: Two months ago I would have had the Sharks in six, but given what has happened since then I feel...well, differently about the way this series is going to work out. The Kings have problems on offense, but my pessimism about the Sharks these days on defense and in goal outweigh that. Kings in six.

Nick: Sharks fans are feeling pretty pessimistic about this match-up because, frankly, pessimism is how we approach postseason hockey. If you recall, the Kings and Sharks played a tense seven-game series a year ago that ended with a 2-1 victory for the home team at Staples. Since then, LA has put together another season of dominating possession hockey, leading the NHL with a 56.7% Fenwick Close, and getting strong goaltending from Jonathan Quick (0.928 Sv% at 5-on-5). Unsurprisingly, the Kings were the toughest team in the league to score on this season. As such, the arguments for optimism in San Jose look something like this:

Jake B.: Welp, this one’s a toughie. Just a few weeks ago, I was telling you all how SJ had to make some serious changes if they wanted to beat the Kings. In the final game of the season, those changes were made, however if the lines they ran in practice yesterday are correct, then those changes have not been made. That certainly doesn’t make me feel good about this series, but I’ll keep my blind optimism as to our chances against the Kings, as well as TMac’s coaching alive, and hope that those changes eventually are put into place, and we can kick the best team in the NHL out of the Stanley Cup race in the first round. Sharks in seven.

Derek: I'm certainly a lot more optimistic about this series than I was at this time a week ago before Tomas Hertl made his triumphant return and Raffi Torres was more or less confirmed to be available for Game 1. On paper, I truly believe the Sharks have a roster capable of beating the Kings, unlike a year ago. I'm less confident in their level of health and in the coaching staff's ability not to screw this up by trotting out James Sheppard as the third-line center and playing Mike Brown in favor of Marty Havlat or Tyler Kennedy. If Todd McLellan has his come-to-Jesus moment early on in this series and ices the lineup that gives the Sharks the best chance to win, I think they'll pull this off. If that never happens, or doesn't occur until it's too late, the Kings will be triumphant once again. I'll guess that Hertl forces McLellan's hand pretty quickly, so Sharks in seven.