Share All sharing options for: Sharks' series-opening victory came with a helping hand from Robyn Regehr

Arguably, the player most important to the Sharks' 6-3 Game 1 rout of Los Angeles last night wasn't even wearing a black sweater. No, that honor likely belongs to veteran Kings blueliner Robyn Regehr who fired a hell of an opening salvo in the battle to cement himself as the worst defenseman in a playoff series that features the likes of Brad Stuart and Scott Hannan. The 33-year-old Regehr skates like he's at least 10 years older than that and represents the biggest weakness of a Los Angeles blueline that's otherwise unparalleled in the NHL. Regehr has been awful for most of the season and a half he's spent in L.A. but he just may have reached the nadir of his Kings career in the first period Thursday night when he was on the ice for all three Sharks goals scored in that frame.

Granted, plus-minus is a fundamentally flawed and largely useless statistic but Regehr was full value for his three first period minuses yesterday. It started with Joe Thornton's game-opening goal on a play that was initiated by Brent Burns beating out an icing call against the lead-footed Regehr. Burns was then able to skate down the boards and back while successfully shielding the puck from Regehr before firing a perfect centering pass to Joe Pavelski that Thornton deflected past Jonathan Quick. Here's the video evidence:

Stunningly, that may have been the first period goal for which Regehr was least at fault. Tomas Hertl's goal that made it 2-0 began with an inopportune line change by Jeff Carter and Mike Richards that allowed Justin Braun to kickstart a 3-on-2 with a perfect stretch pass to Tommy Wingels, who carried the puck into the offensive zone against Regehr. 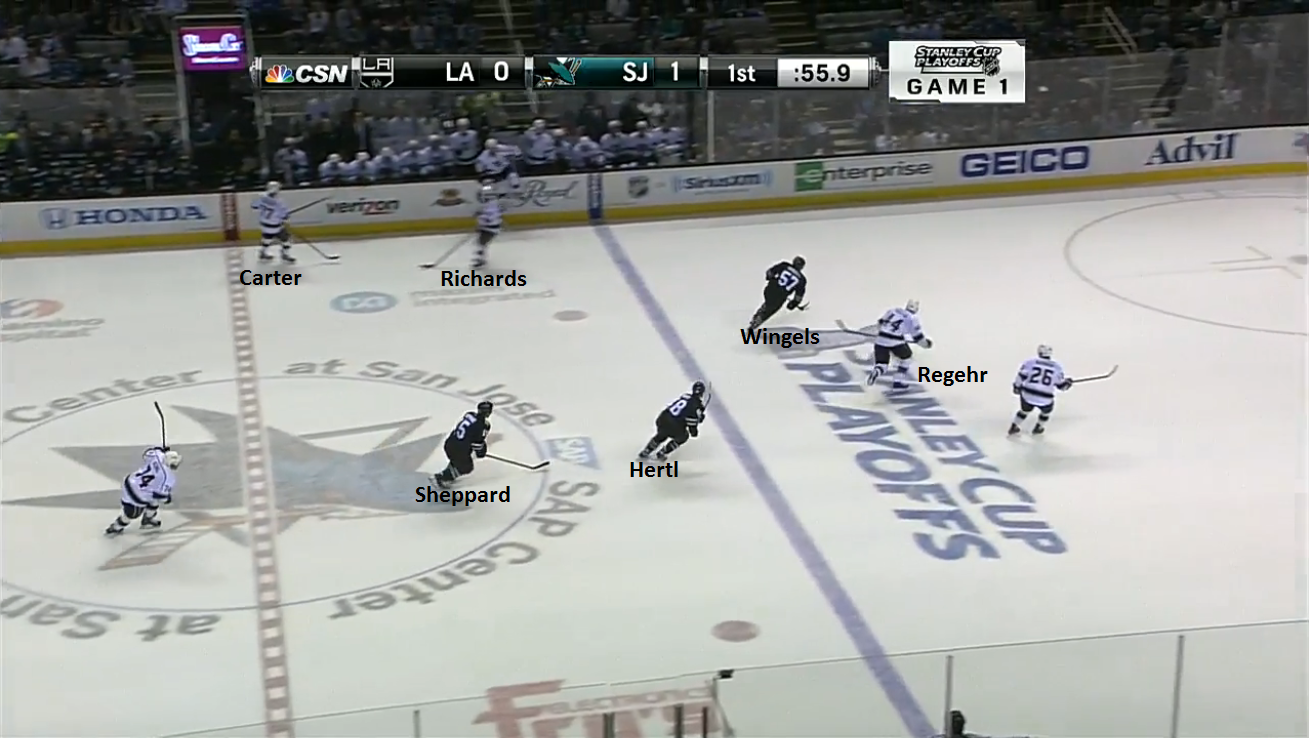 Regehr is so hyper-focused on Wingels that I'm not sure he ever realizes this is an odd-man attack for the Sharks. Wingels curls back after hitting the faceoff circle which would have been a good time for Regehr to reassess the situation and realize he's left poor Slava Voynov with both Hertl and James Sheppard to cover in case the puck gets to either of them. Instead Regehr more or less takes himself out of the play, allowing Hertl a clear path to the net and doing nothing to impede Wingels' passing lanes to both Hertl and Sheppard: 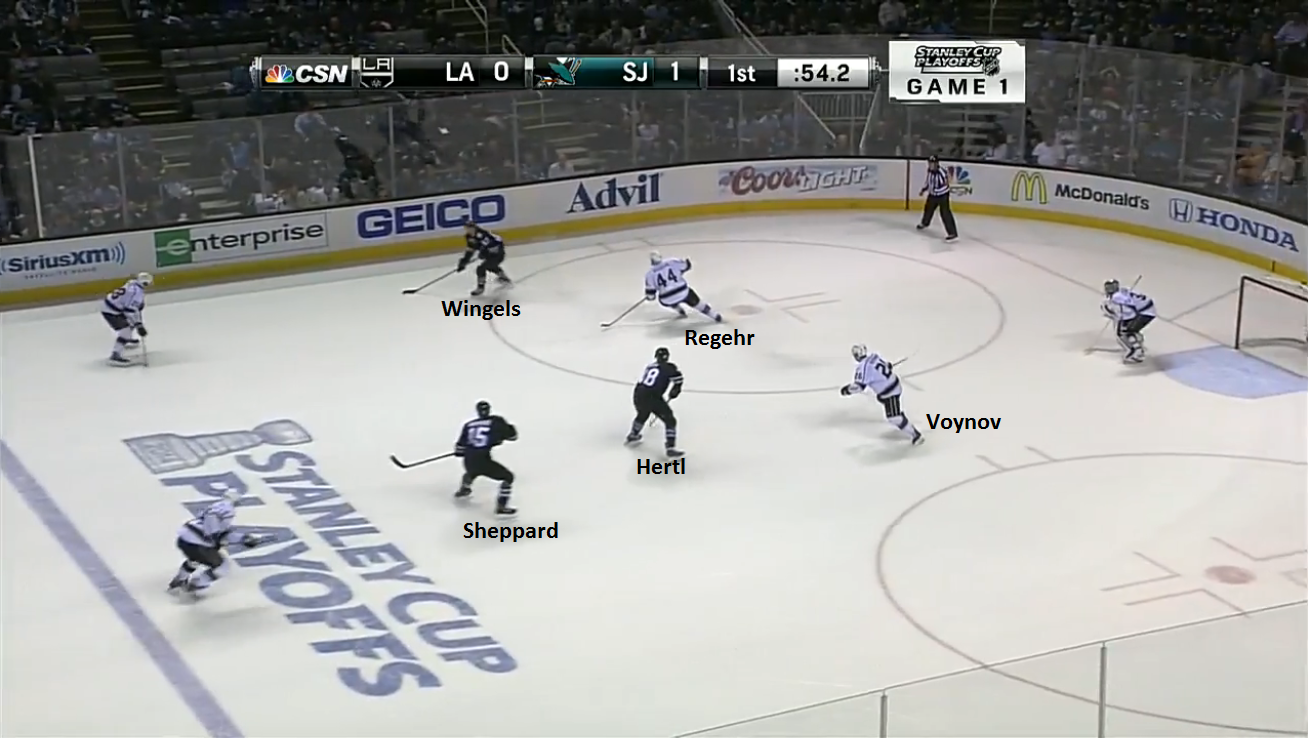 Wingels makes the pass to Sheppard who flubs the ensuing one-timer partially thanks to a great backcheck by Dwight King. Fortunately for the Sharks, the puck finds an unguarded Hertl in front of the net for a tap-in.

About forty seconds later, Regehr's on the ice again which can only mean it's goal-scoring time for the Sharks. A turnover at the Sharks' blueline by Tyler Toffoli leads to a 2-on-1 the other way for Patrick Marleau and Matt Nieto from the Kings' blueline in, with Regehr the lone man back defending: 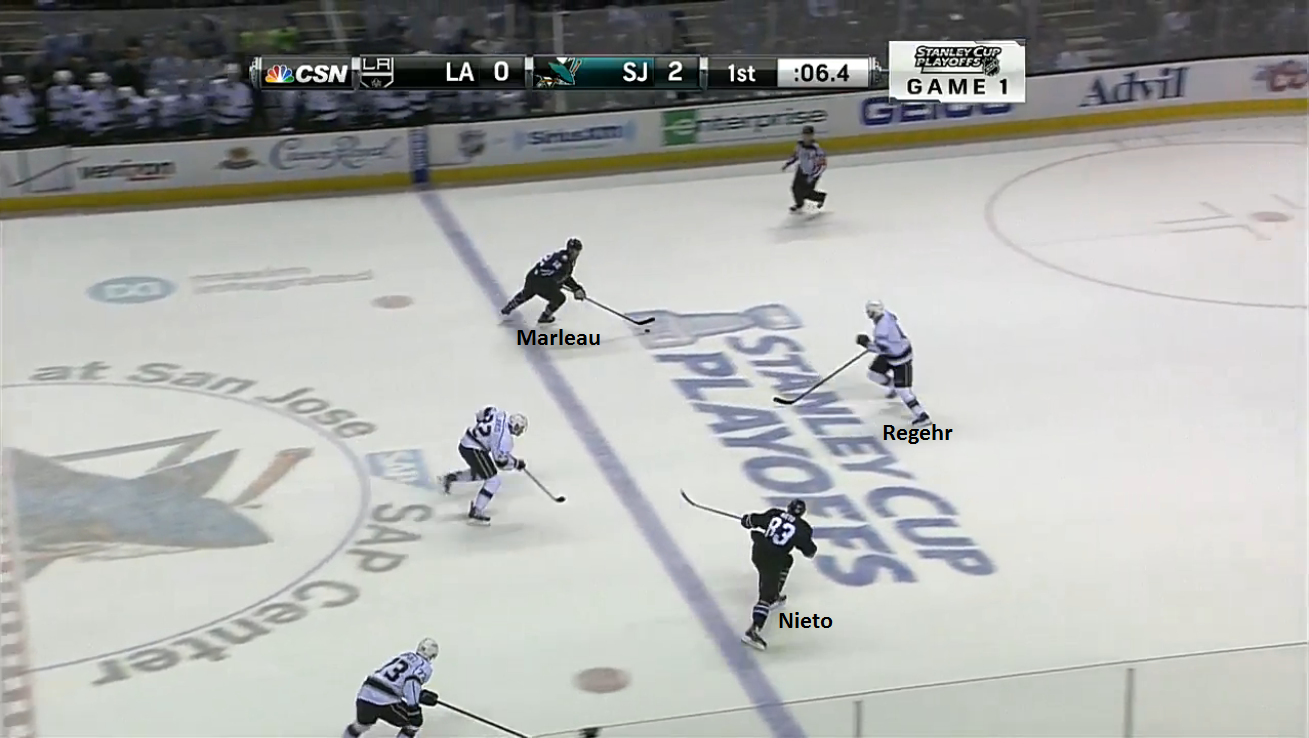 As such, Regehr's options are limited to either taking away the shooter or taking away the passing lane. He, of course, manages to do neither, first leading to a pass from Marleau to Nieto... 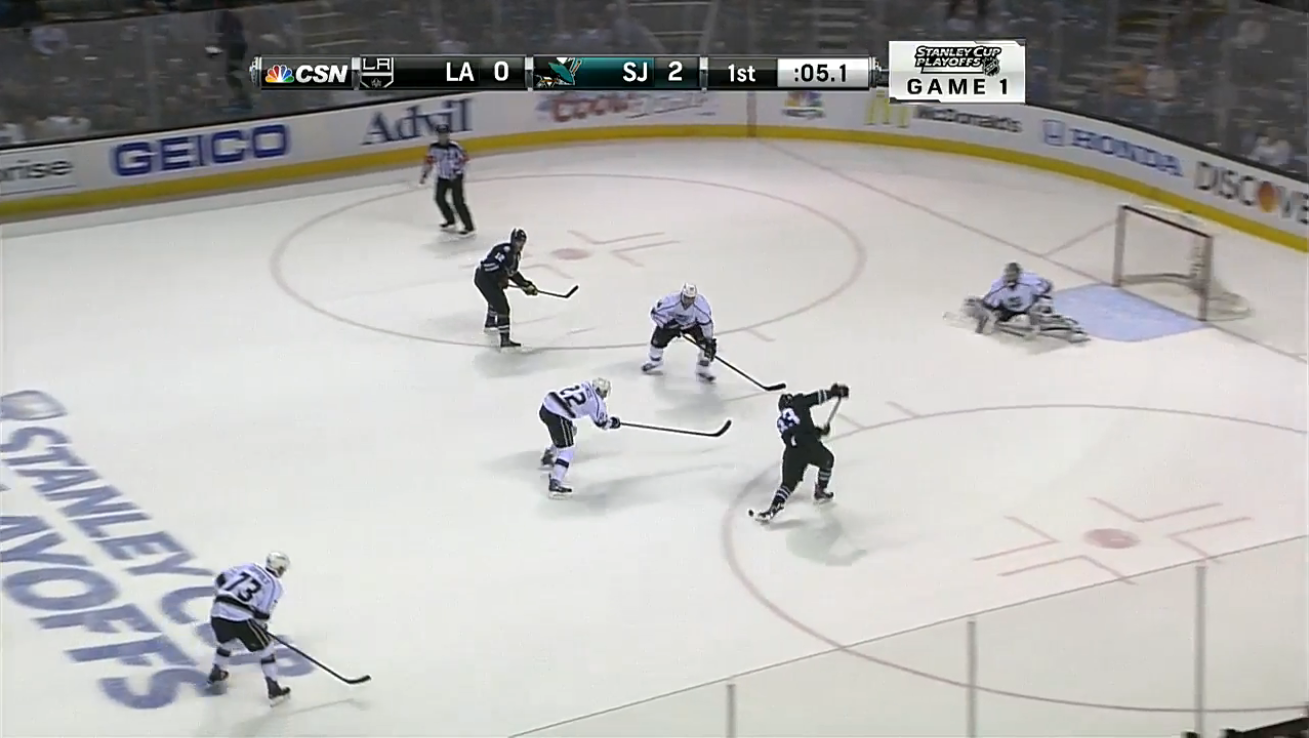 ...and then, after Regehr inexplicably turns his back to the play, from Nieto back to Marleau: 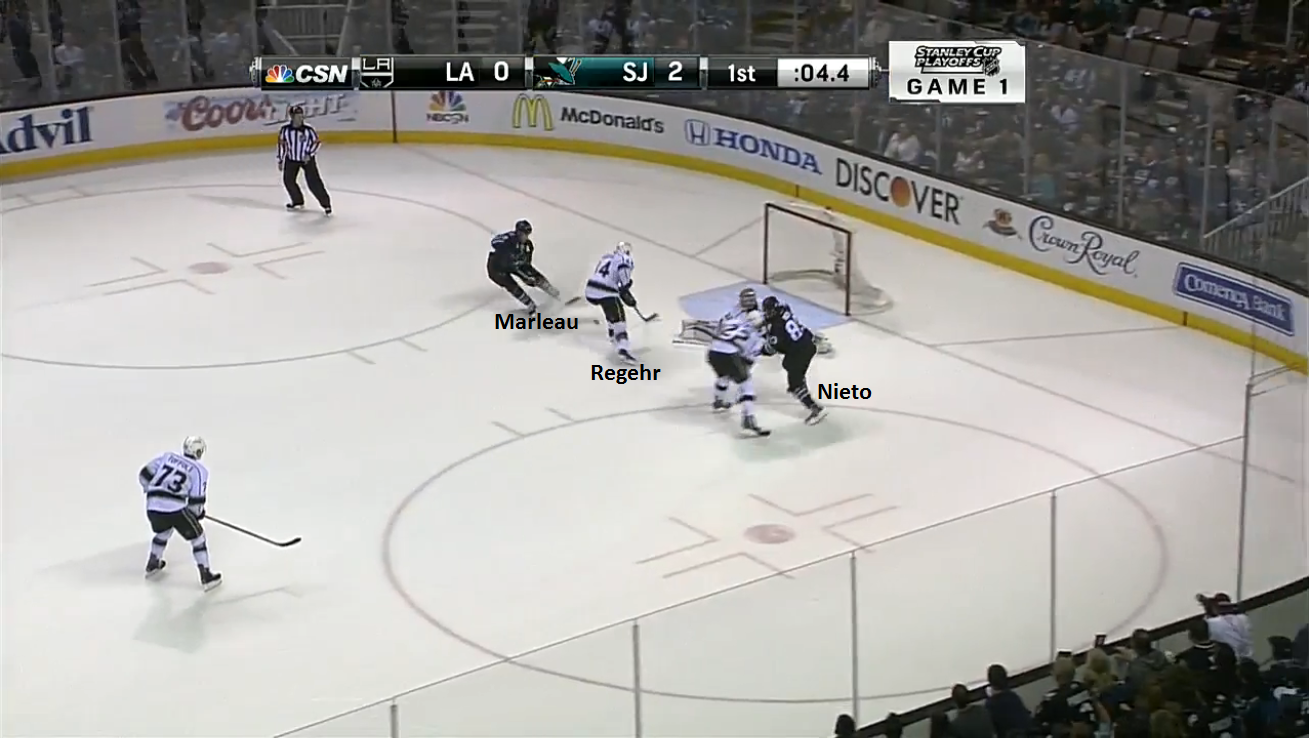 Another layup of a goal and it's 3-0 Sharks. Regehr wasn't done there, either. While he was fortunate enough not to be on the ice for any further goals against, he continued to make valuable contributions to the Sharks' offense. Like on a third period scoring chance that began with Regehr converging on a loose puck in the neutral zone, leading to this battle between him and Marleau just outside the Los Angeles blueline: 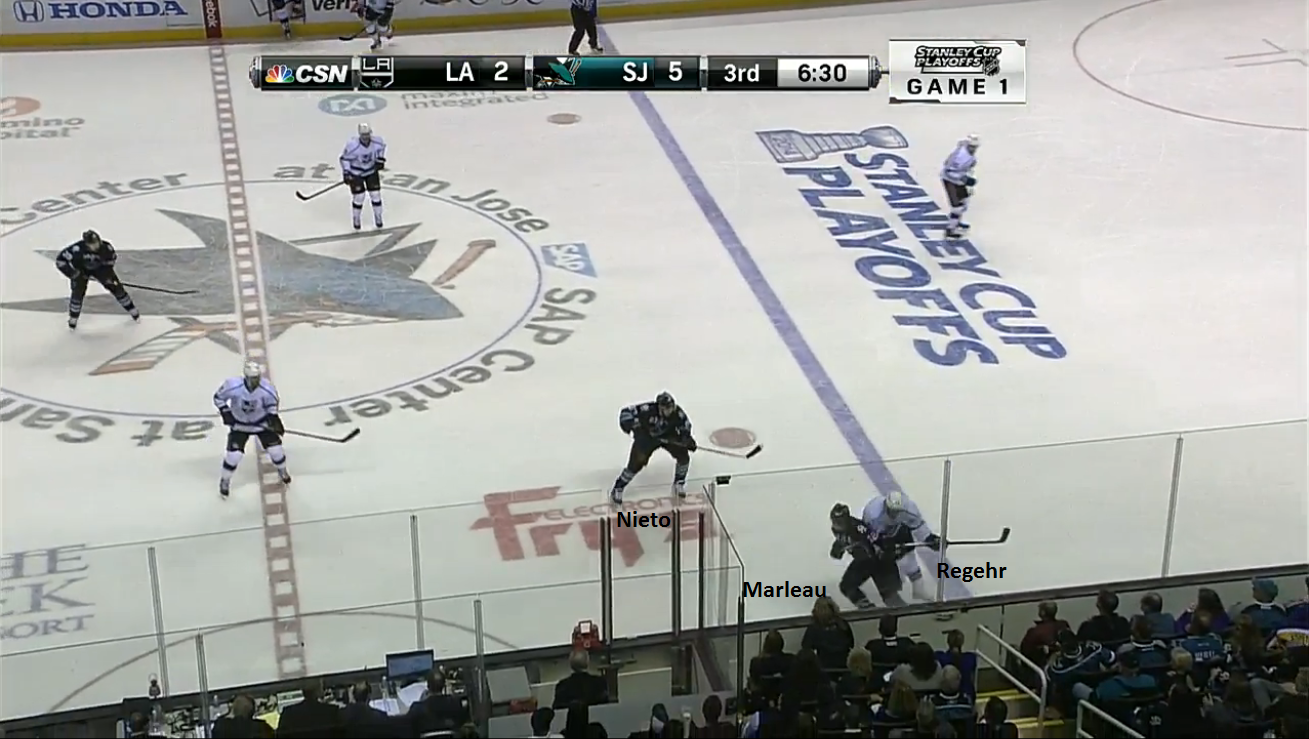 Marleau wins the battle, upending Regehr in the process, and slides the puck into the offensive zone for Nieto before streaking to the high slot. It's unrealistic to expect Regehr to close a two-stride gap on Michal Handzus, let alone Patrick Marleau, and as a result Patty becomes wide open in the high slot where Nieto finds him with a pass: 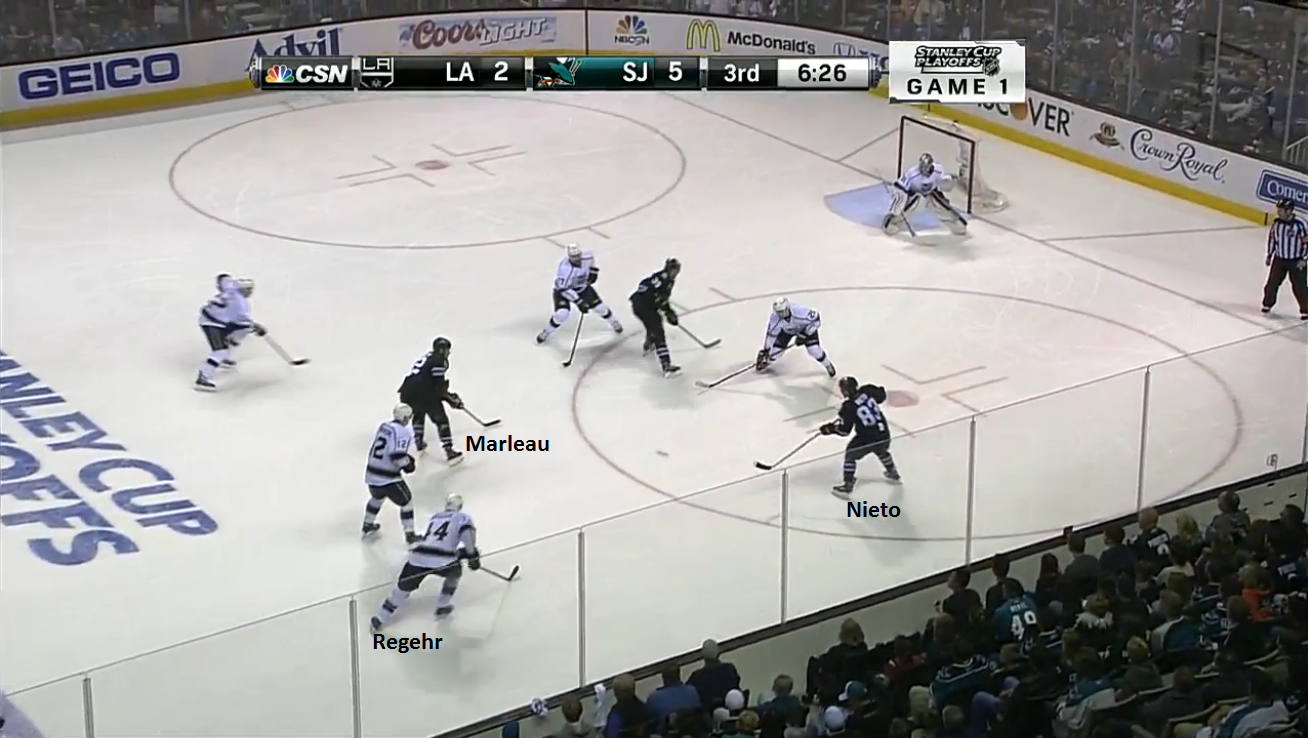 An alert backcheck by Trevor Lewis is the only thing that prevented this from being a golden scoring opportunity. Even still, Marleau was able to fire a shot attempt that missed Martin Jones wide. But the cherry on top of the shit sundae that was Regehr's Game 1 came late in regulation on a play that started with Jason Demers chipping the puck off the glass in his defensive zone, allowing Wingels to deflect it into the neutral zone for an onrushing Andrew Desjardins. Note how far behind Regehr Wingels is positioned in this frame: 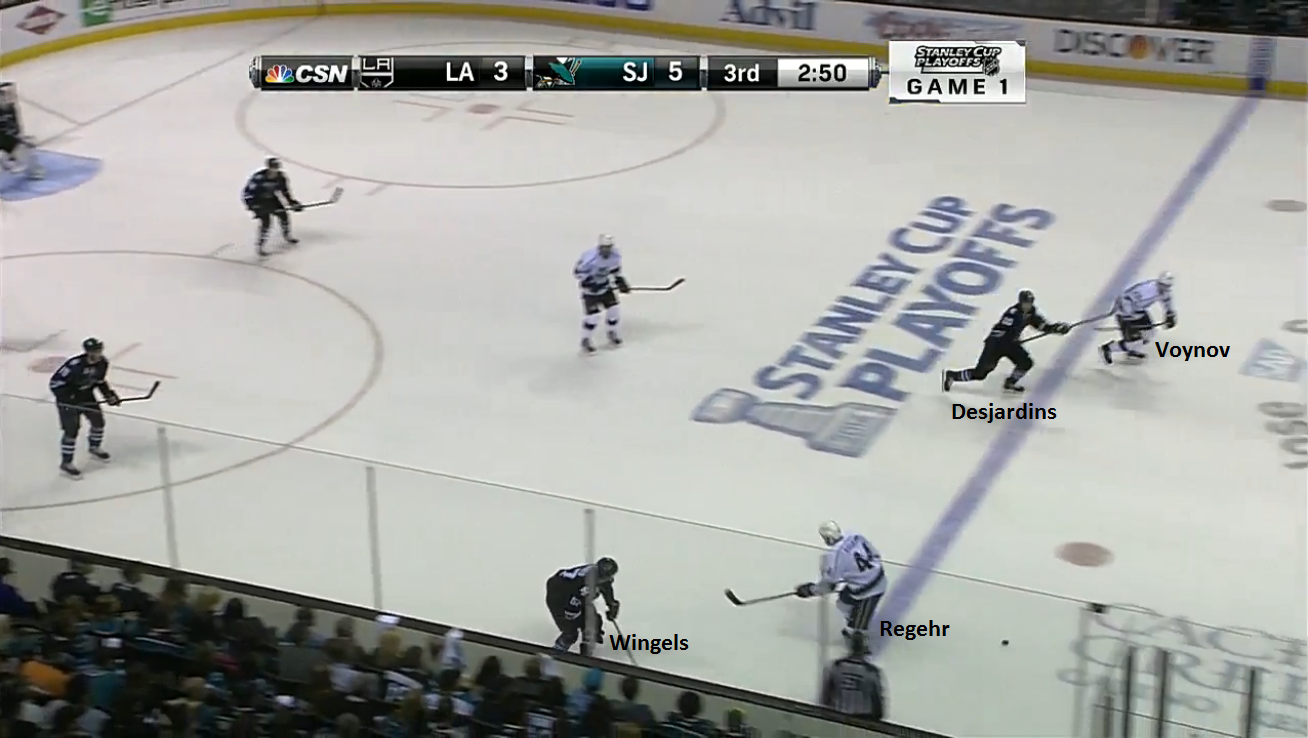 Voynov does a terrific job hounding Desjardins enough to prevent him from getting a shot off on the ensuing partial breakaway. Unfortunately he didn't account for his partner getting stuck in mud on the way back to his defensive zone. Just four seconds after the previous still, Wingels is now clear of Regehr: 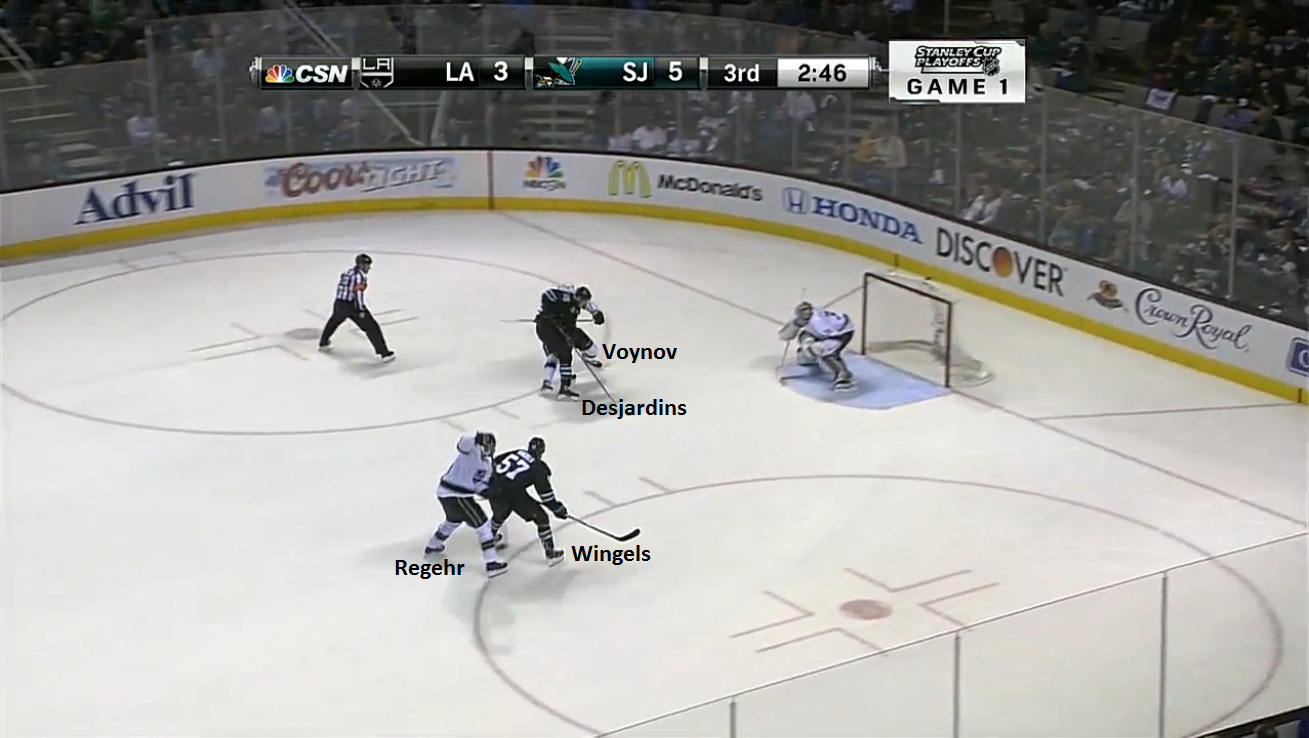 Desjardins passes the puck to a now-open Wingels who gets an excellent scoring chance on net, forcing Martin Jones to make his toughest save of the night.

Bret Hedican on the CSN-California broadcast relayed comments by Sharks assistant coach Jim Johnson that part of the team's gameplan was to get Matt Nieto on the ice against Regehr as frequently as possible, a speed mismatch if there ever was one. They were successful in doing that, as Nieto was the Sharks forward Regehr faced more than any other at even-strength last night, and likely got the results they wanted as Nieto set up two scoring chances, including Marleau's goal, while on the ice against him. But just about every other San Jose forward had a field day when matched up against Regehr as well.

Regehr isn't going to get burned for three goals against every game but we knew going into this series that the Kings' second pairing was vulnerable, largely because of him. He's an oasis of awful in a desert of defensive stinginess. Provided Darryl Sutter doesn't replace Regehr in the lineup with Matt Greene going forward (although I'm not convinced that's a huge upgrade), the Sharks need to continue targeting him, particularly with their speedier offensive weapons. Regehr was the Sharks' first star of the game last night and could be a difference-maker for San Jose in a future game of this series as well.