By the numbers: Sharks vs. Kings, Game 1

Scoring chances, zone entries, zone exits and more from the Sharks' 6-3 win over Los Angeles in Game 1 of the Western Conference Quarterfinals.

Share All sharing options for: By the numbers: Sharks vs. Kings, Game 1 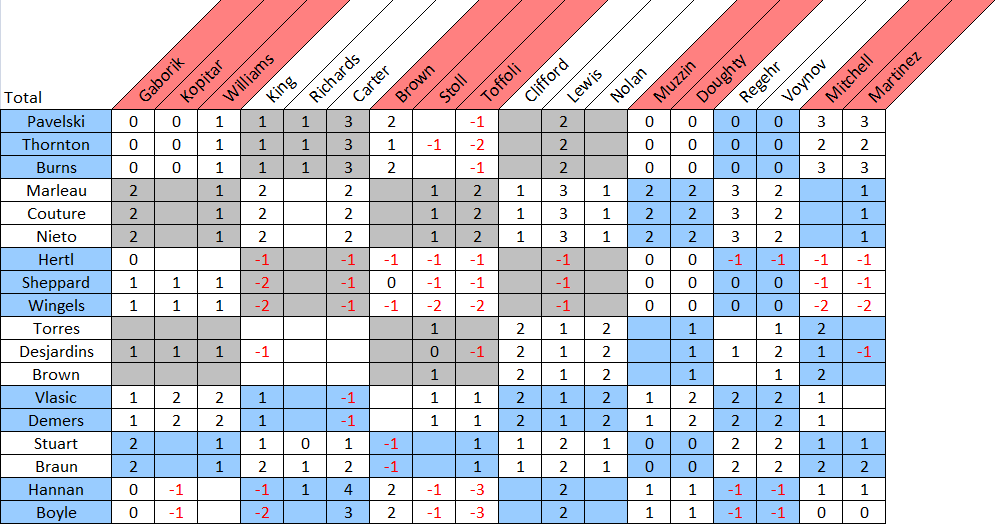 This was the most lopsided margin by which the Sharks have ever outchanced the Kings in the Darryl Sutter era (L.A.'s Darryl Sutter era, not San Jose's). Following a Jeff Carter chance fifteen seconds into the game, the Sharks went on a run that saw them generate 16 of the next 18 scoring opportunities in the game (six on the power play, where they looked very good despite only scoring once). Even when they sat back for the entirety of the third period, the Sharks still managed to generate six chances to the Kings' four. I didn't think any NHL team was capable of doing something like this to the Kings, and I don't expect every game of this series to go this way, but the Sharks sure picked a great moment to truly pulverize Los Angeles for the first time in years.

I'll admit that I was a bit concerned about Matt Nieto being able to hold his own defensively on a line that would be hard-matched against Anze Kopitar throughout the series. Consider those doubts at least temporarily assuaged. Despite spending about 83% of their even-strength ice time out against Kopitar, the line of Nieto, Logan Couture and Patrick Marleau generated five scoring chances while surrendering zero. Nieto may have been the best of the three, too, with a chance of his own, assists on two additional chances and an explosive game in the neutral zone (more on that in a bit) that exploited some of the Kings' slower defensemen. Big ups to Marc-Edouard Vlasic and Jason Demers for another strong game behind them too.

The point of matching Couture against Kopitar is to free up Joe Thornton for a matchup against Mike Richards, who he's historically dominated. Things were no different last night and Darryl Sutter tried his best to manipulate that matchup in any way he could. He sent Richards out for offensive-zone faceoff after offensive-zone faceoff in an attempt to force the Thornton line to skate 200 feet in order to set up their cycle but they were up to the task. Sutter just ended up barely playing Richards as only Kyle Clifford and Jordan Nolan received less even-strength ice time than L.A.'s supposed second-line center.

The only downside of this game for the Sharks was a familiar one: James Sheppard continues to struggle defensively in his role as the team's third-line center and dragged his wingers down with him. As much as the importance of faceoffs tends to get overrated, Sheppard won just 2 of 11 draws last night, a big reason that line was the only one to get outchanced at even-strength and finish below 50% in shot attempts. McLellan tried to mitigate this a bit by sending Thornton, Pavelski and Desjardins out to take draws for that line, particularly in the defensive zone, but it didn't seem to have much of an impact.

Ultimately, I'm less concerned with McLellan's questionable lineup decisions (both Sheppard staying at 3C and Mike Brown being in the lineup over just about anybody else) on home ice where he has the advantage of last change and I wouldn't expect to see any alterations heading into Game 2 on Sunday. When this series shifts to Staples Center, though, I don't think the Sharks can afford to allow Sutter to target a porous third line in an effort to get Richards and Jeff Carter going.

Thanks, as always, to Jake Barrow for tracking entries and exits.

L.A. had a 26-21 edge in entries during the third period which is why they ended up with more overall but the Sharks did a very good job in preventing the Kings from generating shot attempts even when they managed to gain the blueline with control. On the flipside, the Sharks created opportunities at an obscene rate when carrying it in last night; averaging nearly a shot per controlled zone entry is an incredible (and unsustainable) performance, likely fueled by all the odd-man rushes San Jose had.

I kept thinking to myself during the game that Nieto looked like the best player on the ice and it's always nice when the numbers back up the eye test like they do here. He led the Sharks in overall entries, controlled entries and percentage of entries with control, seemingly kicking his already-blinding speed into another gear. As impressed as I've been with him all season, I think last night was far and away his best game in the NHL so far.

While Nieto was the one driving the bus for the Couture line in the neutral and offensive zones, Couture and Marleau were the Sharks' best forwards in the other third of the rink, moving the puck out of the defensive zone with some of the top success rates on the team.

Brad Stuart and Scott Hannan were...Brad Stuart and Scott Hannan. Stuart turned the puck over on 6 of his 10 attempts to exit the defensive zone, and iced it on another. Hannan turned it over on 4 of his 6 exit attempts. As much as the Sharks will benefit from targeting Robyn Regehr all series, the Kings are going to be able to force turnovers against Stuart and Hannan fairly easily. The Sharks have to play at least one of them but I think I'd limit it to that bare minimum one and put Matt Irwin back in for Hannan.