By the numbers: Game 77 vs. Edmonton

Share All sharing options for: By the numbers: Game 77 vs. Edmonton 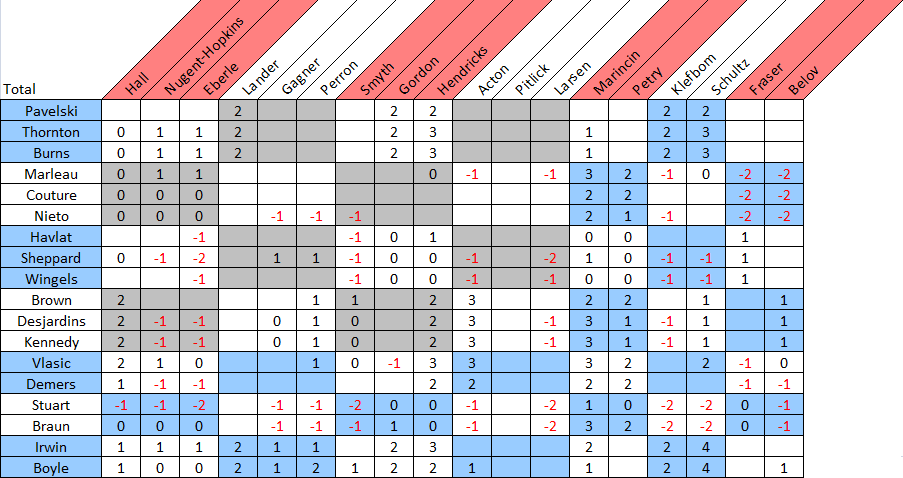 The chances paint a more encouraging picture of the Sharks' effort last night than shot attempts, or the eye test for that matter, did. San Jose didn't generate many shots at even-strength through the first forty minutes but many of the ones they did earn came from the scoring area, which I suppose has to be seen as a positive sign. Thornton's line in particular comes out looking much better here than I would have expected based on their performance in the first two periods.

You know it's a bizarre game when the Sharks (or any team, for that matter) generate fewer shots per entry when bringing the puck into the offensive zone with control than they generate off dump-ins, but that was the case last night. Both San Jose and Edmonton gained the blueline with control at very high rates but both clubs, the Oilers in particular, were also unusually successful when forced to dump it in. Just a strange, sloppy game defensively at both ends of the rink.

Brad Stuart now has five games under his belt since returning from injury and, oddly enough, I think he was far better in his first two games back than he's been since, with last night marking his third straight awful showing. The numbers above speak for themselves; Stuart turned the puck over on four of his twelve defensive-zone touches and only successfully advanced it into the neutral zone once. He was a big reason his pairing with Justin Braun struggled. On the bright side, Matt Irwin and Dan Boyle (especially Boyle) turned in one of their better performances of the season; if that tandem could somehow keep this up and push Stuart/Braun for minutes, the Sharks can overcome poor play from Stuart.