By the numbers: Sharks vs. Kings, Game 2

Scoring chances, zone entries, zone exits and more from the Sharks' 7-2 win over Los Angeles in Game 2 of the Western Conference Quarterfinals.

Share All sharing options for: By the numbers: Sharks vs. Kings, Game 2 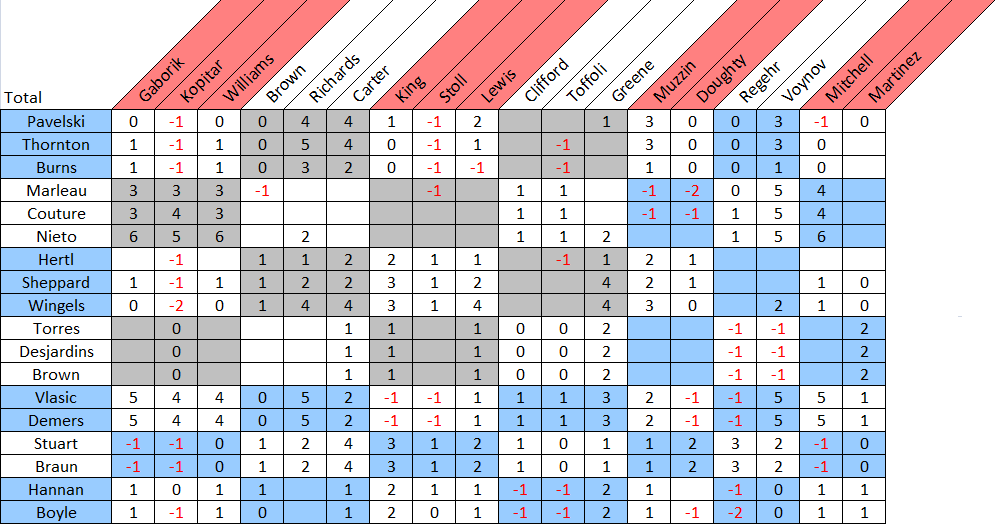 Even when the Sharks were down 2-0 in the first period, they weren't really being outplayed by the Kings. They outchanced Los Angeles 9-3 in the opening frame and you just knew the goals were coming; as great as Jonathan Quick looked in those first twenty minutes, there was no way he could keep that level of play up if the Sharks continued to generate the volume of chances that they were. And continue they did. I mentioned in the Game 1 by the numbers post that it was the most lopsided margin by which the Sharks had outchanced the Kings in the Darryl Sutter era. Game 2 was even better.

Matt Nieto has now played 23:36 at even-strength in his Stanley Cup Playoffs career, 14:18 of which has come against Anze Kopitar. With Nieto on the ice at evens in this series, the Sharks have now outchanced Los Angeles 12-0. You can have your narratives about the fourth line changing the momentum of this series but what I hope isn't overlooked is that Nieto has arguably been the Sharks' best player through two games. He should be the weak link on a line that includes Patrick Marleau and Logan Couture but, instead, he's managed to outplay them (which is no disrespect to either of those two, who have been terrific) and is one of the primary reasons, alongside Marc-Edouard Vlasic, that the Sharks have completely contained L.A.'s top line so far.

On the Kings side of the ledger, Robyn Regehr had a bit of a bounceback night after a horrific Game 1 (although he was still primarily at fault on Couture's goal) but Robyn Regehr 2.0 filled in nicely. Darryl Sutter dressed Matt Greene as his 7th defenseman last night and the Sharks outchanced the Kings 6-0 (and outscored them 4-0) when Greene was on the ice at even-strength. But at least Greene is expected to be awful; the Sharks outchanced L.A. by a 7-0 margin when supposed second-line center Mike Richards was on the ice at evens. If the Kings fail to come back in this series, I think it's fair to point a finger at Darryl Sutter for dismantling line combinations that were dominant down the stretch in an apparent attempt to cater to Richards, who just isn't a very effective player anymore.

I mentioned in the Game 1 stat-cap that the Sharks averaging .93 shots per controlled entry against the Kings was unsustainable. I clearly don't know what I'm talking about because the Sharks actually improved on that, averaging extremely close to a shot every time they crossed the blueline with the puck which is crazy stuff against the best defensive team in the league. Once again, the Sharks were explosive in transition and had plenty of odd-man rushes. This win had a lot to do with San Jose killing it in the neutral zone.

Here's a pretty incredible stat: after being cobbled together as a forward line about five minutes into the second period, the trio of James Sheppard, Joe Pavelski and Tommy Wingels generated ten zone entries. They carried the puck into the zone on eight of those, including a controlled entry by Sheppard that directly led to Justin Braun's game-winning goal and (obviously) one by Pavelski on his goal that came on a 3-on-0 rush courtesy a terrible Kings line change. Small sample size caveat and all that but this sort of underscores what the Sharks were leaving on the table by keeping Sheppard at third-line center; not only is Pavelski a vast upgrade in that role, Sheppard is a terrific puck possession player when he's allowed to skate at wing and doesn't have to worry about faceoffs or extensive defensive-zone responsibility. He had a fantastic game in the neutral zone following the switch.

I should probably stop gushing over Nieto but he's now generated 13 zone entries, an impressive 11 of which have come with control of the puck, in this series. His speed is just no match for some of the Kings' slower defensemen (can you imagine if they still had Rob Scuderi?) and it really seems like he's taken it into another gear here in the playoffs.

Justin Braun was magnificent in his own zone, successfully advancing the puck on 10 of his 13 attempts to, and he needed to be as Brad Stuart followed up an uninspiring Game 1 performance on the zone exit front with another ineffective one last night. On his five clear attempts to exit the zone, Stuart turned the puck over four times.

The fourth line is getting a lot of credit for the win, and I certainly wouldn't take anything away from what they accomplished offensively, but that seems to be obscuring how much they struggled in their own zone. It isn't surprising Mike Brown finished with a team-worst shot differential when he touched the puck seven times in his own end and turned it over on five of those occasions. Andrew Desjardins wasn't a whole lot better in that regard either. But at least they made up for it at the other end of the ice.