By the numbers: Sharks vs. Kings, Game 3

Scoring chances, zone entries, zone exits and more from the Sharks' 4-3 overtime victory over the Kings in Game 3 of their Western Conference Quarterfinal series.

Share All sharing options for: By the numbers: Sharks vs. Kings, Game 3 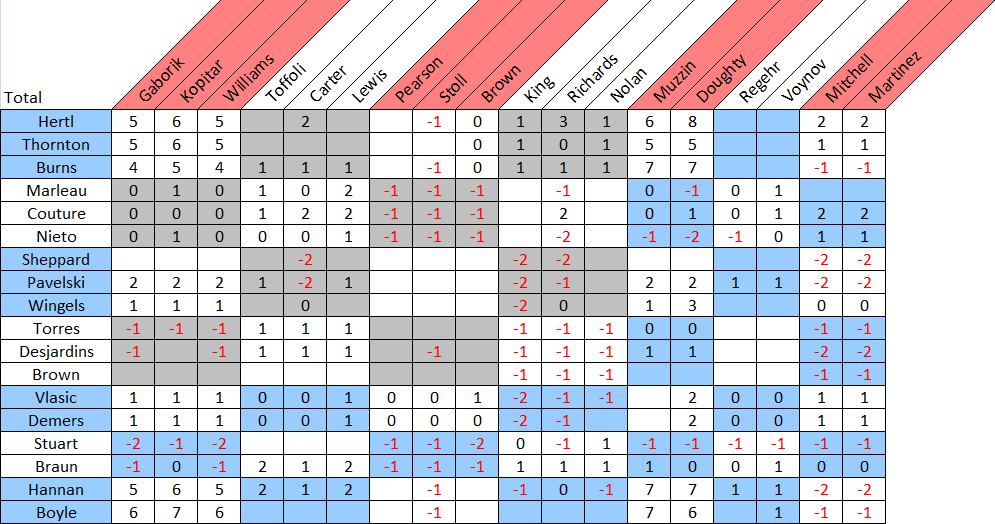 There's no question the Kings were more competitive (and more closely resembled the Kings team we expected to see coming into this series) in Game 3 than in the two games in San Jose and the scoring chances bear that out, although it's worth noting L.A.'s edge in territory was completely reversed when it came to generating quality looks. But the most significant advantage of playing on home ice—last change—didn't really work out for the Kings the way Darryl Sutter had to expect it would. Anze Kopitar was hard-matched against Joe Thornton as opposed to Logan Couture, who draws him in San Jose, but was absolutely crushed at even-strength. With Kopitar on the ice five aside, the Sharks outchanced the Kings 8-1 (and outshot them 15-4) largely thanks to a signature performance by Tom, Dick & Hairy with the latter in particular putting in a dominant effort.

Brent Burns was his typical monstrous self on the forecheck and was probably the key reason the Thornton line was generally the one to take charge and turn the tide in the Sharks' favor when the team was being repeatedly hemmed in its own zone early in the second period. Todd McLellan commented after Game 2 that he believes Pavelski is at his best at center—where he's spent the vast majority of his shifts in this series since the start of the second period in that game—but it was difficult for him to take a 40-goal scorer off the top line. I have to think watching what Hertl, Thornton and Burns were able to do in the offensive zone last night has to somewhat change McLellan's thinking there. Those three were just as effective as some of Pavelski/Thornton/Burns' best games in the second half of the regular season. Burns alone had five scoring chances in Game 3 and now has 16 shots on goal in the series.

While the Sharks were somewhat permissive at their defensive blueline, they made up for it by generating more overall entries than the Kings; something that rarely happens against Los Angeles. To the Kings' credit they tightened up quite a bit in the neutral zone compared to Games 1 and 2 and allowed far fewer odd-man rushes, a big reason the Sharks' shots-per-controlled-entry rate dipped substantially in this one.

That did not apply, however, to when Patrick Marleau was the one gaining the blueline either with control of the puck or without. San Jose averaged a whopping 1.8 shots when Marleau was the one driving play into the offensive zone with the game-winner in overtime set up by a strategically-placed Marleau dump-in.

On the flip side, James Sheppard as well as the fourth line struggled to get much going offensively as evidenced by the scoring chance and zone entry numbers. There isn't really a compelling reason for Todd McLellan to change anything, especially now that Joe Pavelski looks to be cemented as the third-line center, but I wonder if he'll swap Sheppard and Raffi Torres either tomorrow night or in the second round assuming the Sharks advance. Torres has proven in the past he can play with skill players (and Pavelski and Wingels specifically) and has unquestionably better finishing ability and puck skills than Sheppard, who's ultimately best-suited for a fourth line role.

I'd be remiss if I didn't include a GIF (via Thomas Drance) of the greatest zone entry of this series to date:

This wasn't a great game for the Sharks' blueline as a whole. San Jose's six defensemen had 47 clear attempts to exit the defensive zone and turned it over on 24 of them—that's north of 50%, and they also combined to ice the puck on three other occasions. It's an indication of how successfully the Kings were executing their forecheck but a player like Jason Demers needs to be better here; Brad Stuart and Scott Hannan are total lost causes on this front but Demers has the puck skills to move it out more effectively than he did last night.