By the numbers: Sharks vs. Kings, Game 4

Scoring chances, zone entries, zone exits and more from the Sharks' 6-3 loss to Los Angeles in Game 4 of the Western Conference Quarterfinals.

Share All sharing options for: By the numbers: Sharks vs. Kings, Game 4 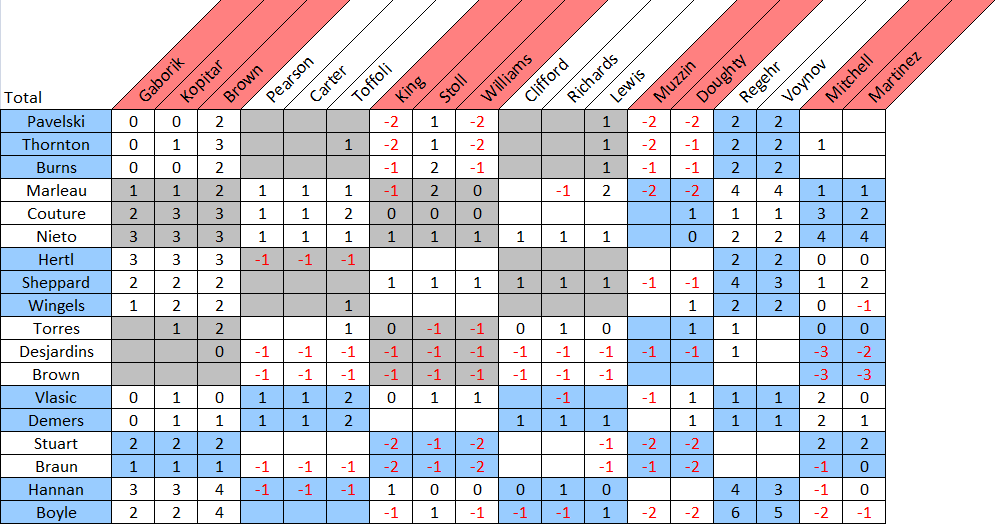 Joe Thornton mentioned after the game that the scoreboard wasn't really a fair indication of how the Sharks played and the numbers certainly back him up. For the fourth time in four tries in this series, the Sharks outchanced the Kings by a substantial margin, especially at even-strength. San Jose now has 69 even-strength chances in this series to just 35 for Los Angeles. Sometimes the bounces go in your favor (like, say, in overtime of Game 3) and sometimes they don't; Game 4 was firmly in the latter category for the Sharks but it's definitely a positive that they were probably still the better team. If they're able to come close to doubling up the Kings in five-on-five scoring opportunities for a fifth straight game tomorrow, the Sharks should have a great chance of ending this thing.

No one else seems to really be giving him enough credit for what he's doing in this series so I'll continue to beat the "Matt Nieto is awesome" drum. The Sharks outchanced the Kings 7-1 when he was on the ice at even-strength last night despite him starting eight shifts in the defensive zone and just one in the Kings' end. Four of those chances came off Nieto's stick and he set up two others. He's been every bit as important to his line's success in this series as Patrick Marleau and Logan Couture, if not moreso.

The top line's even-strength chance numbers above are inflated quite a bit by extra skater time at the end of the game after McLellan pulled Alex Stalock and a pair of chances generated by the Sharks immediately after a power play before the penalized King was able to return to the defensive zone. All of that is to say that I don't think that line was as good at evens last night as the chances suggest (Thornton was even in five-on-five shot differential while Pavelski was a minus) and it still puzzles me that McLellan opted to take Tomas Hertl off Thornton's left wing when he was spectacular there in Game 3. While it's great that the third line was largely able to pick up the slack and the Sharks saw little drop-off in play as a result, I'll be interested to see what the coaching staff's response is to the first loss of the postseason.

This was an absurdly dominant game by the Sharks not only in the neutral zone but in recovering pucks in the offensive zone after generating initial shot attempts (Jonathan Quick's shaky-at-best rebound control played a part, no doubt). The Sharks averaged over a shot per controlled zone entry, nearly double what the Kings managed when they carried the puck into the offensive zone, and gained the zone with control against the stingiest defensive team in the league on over 57% of their attempts.

Once again, the Sharks were successful in targeting the Kings' slower defensemen like Robyn Regehr (who, by the way, was on the ice for eight San Jose scoring chances and zero by Los Angeles) both by attacking their wing and strategically dumping it into their corner. Matt Nieto, as he's done all series, excelled through neutral ice as the Sharks generated nine shots on his four controlled zone entries.

This is the sort of game Dan Boyle would have, and could have, taken upon himself to single-handedly get the Sharks back into in the third period had it taken place a few seasons ago. It's depressing that Boyle no longer has the ability to be a one-man exit-and-entry machine unleashed by the coaching staff on opponents late in games when the Sharks are trailing; he's having enough trouble just coming out of his own zone cleanly as he turned over or iced the puck on five of his nine attempted zone exits. Patrick Marleau, on the other hand, was fantastic in moving the puck effectively into the neutral zone (at which point Matt Nieto took over). Marleau touched the puck eight times in the defensive zone and either carried or passed it out on seven.