By the numbers: Sharks vs. Kings, Game 5

Scoring chances, zone entries, zone exits and more from the Sharks' 3-0 loss to Los Angeles in Game 5 of the Western Conference Quarterfinals.

Share All sharing options for: By the numbers: Sharks vs. Kings, Game 5 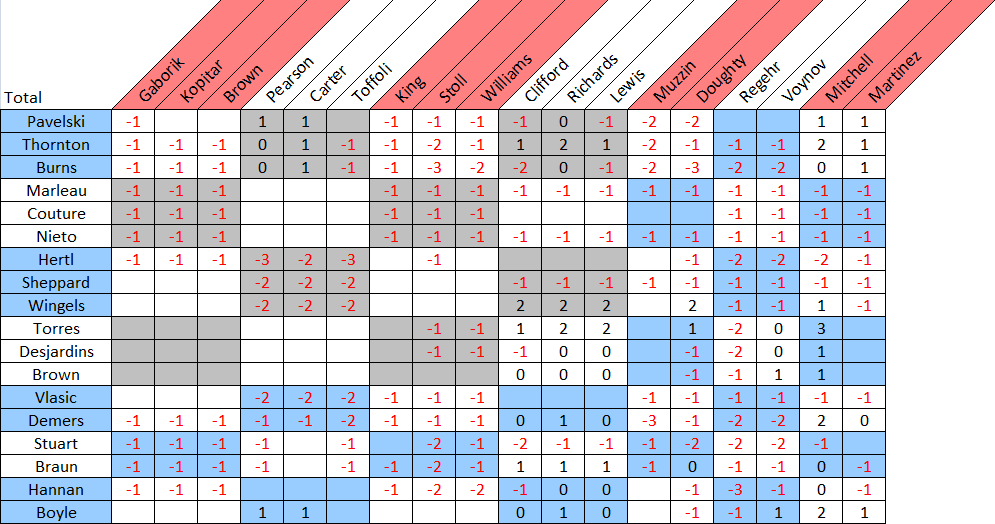 It took five games but the real Los Angeles Kings finally showed up to this series. That's about the best way I can describe what went down in Game 5 and the most significant indicator is that the Sharks and Kings combined for just 17 even-strength scoring chances last night, with San Jose held to only six. When the Kings are at their best, they play low-event, boring hockey that suffocates the hell out of their opponents and ensures Jonathan Quick doesn't have to make many difficult stops to pick up a win. That's not at all what happened in the first four games of this series as the Sharks outchanced L.A. 69-35 at evens in those contests. Last night the Kings were able to flip the script as they held the Sharks to just one five-on-five scoring chance (and even that was from Andrew Desjardins, of all people) in the first 39 minutes of Game 5.

The only place the Sharks were able to generate anything, and the only reason they actually ended this one with one more overall scoring chance than the Kings, was the power play. While they couldn't convert, the Sharks did create chances galore and with Patrick Marleau and Justin Braun both missing wide-open nets it was more a factor of bad luck than anything else that they weren't able to score on the man-advantage. If there's a bright spot in this game for San Jose, it's that their power play is still dangerous. But good lord was this thing one-sided at even-strength.

Again, these are the types of numbers you'd typically see in Sharks/Kings games during the Darryl Sutter era prior to the start of this series. L.A. did not budge an inch in the neutral zone last night, successfully bottling it up and forcing the Sharks to dump the puck in on over 66% of their entries. When Patrick Marleau and Joe Pavelski combine for zero zone entries, you know San Jose had a hell of a time coming through the neutral zone. Even Matt Nieto, who was a godsend for the Sharks in neutral ice in Games 1-4, was forced to resort to a dump-in on four of his five zone entries, from which the Sharks generated a grand total of zero shots (the Couture line as a whole had their first ineffective game of the series). The Kings were dialed in last night and the Sharks have to hope the L.A. team they face in Game 6 more closely resembles the one they saw in the first four games of this series.

Justin Braun has been terrific in this series, despite having the anchor that is Brad Stuart tied around his legs, and was really the only defenseman able to stall the Kings' forecheck and catalyze the breakout for the Sharks after Marc-Edouard Vlasic's injury. Stuart, Scott Hannan and Dan Boyle all exited the zone on 30% of their clear attempts to or fewer. Boyle in particular had a nightmarish game coming out of his own end, turning the puck over on five of his six clear attempts at zone exits. I don't think it's possible to overstate the impact of a long-term injury to Vlasic on the Sharks' already-thin blueline.