By the numbers: Sharks vs. Kings, Game 6

Scoring chances, zone entries, zone exits and more from the Sharks' 4-1 loss to Los Angeles in Game 6 of the Western Conference Quarterfinals.

Share All sharing options for: By the numbers: Sharks vs. Kings, Game 6 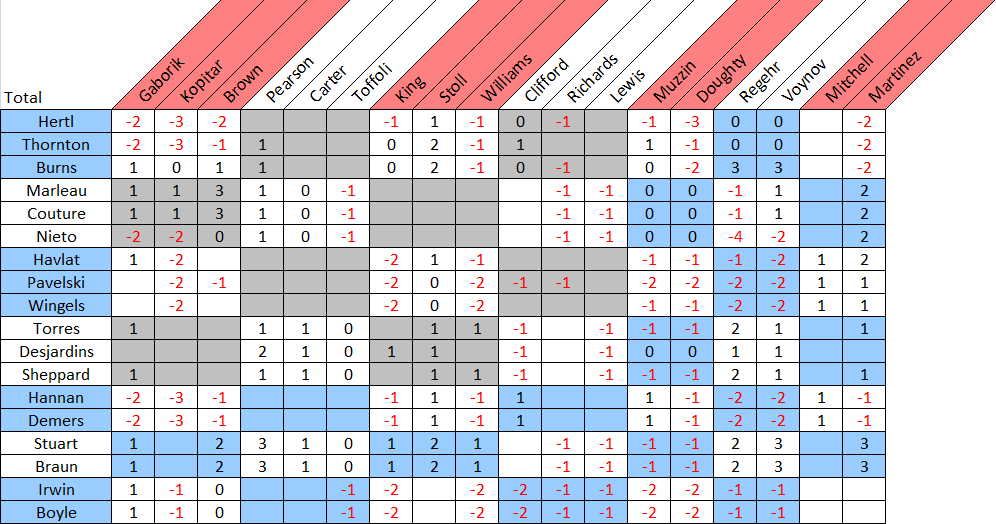 There's a lot that Todd McLellan got right in Game 6--sitting Mike Brown for Marty Havlat was five games past-due but at least it finally happened and he and Larry Robinson optimally paired their defensemen in the absence of Marc-Edouard Vlasic. But placing Havlat on a line with Joe Pavelski and Tommy Wingels was a head-scratcher. It shouldn't be this difficult for an intelligent coaching staff to figure out how to make the most of their incredible forward depth but it apparently is. The value of analytics in hockey is sometimes downplayed because the stats and eye test match up somewhere around 95% of the time, and I'd certainly agree with that assessment. But the reason statistics are valuable is that evaluating players by the eye test alone requires you to have a near-eidetic memory.

It was clear from mid-November to early December when Havlat was on a line with Pavelski that the two didn't mesh. The coaching staff believed this too as they dismantled the Havlat-Pavelski-Kennedy line prior to a game in Minnesota, never to be seen again. It was clear down the stretch in the 2013 regular season that Raffi Torres, Pavelski and Wingels were aces together. The coaching staff believed this too as they kept them together as long as possible (which ended up being right until Havlat got injured in Game 1 against Vancouver that spring). The problem is that they're seemingly incapable of remembering these things long-term, and they shouldn't be expected to; so much has happened since those runs that it's impossible to keep track of this stuff unless you pay attention to the data.

They don't pay attention to it (or are looking at stuff that doesn't matter) and the result is what happened on Monday. Despite being the only Sharks line to start more shifts in the offensive zone than the defensive end, Havlat - Pavelski - Wingels ended up with the three worst on-ice shot differentials on the team. Even-strength scoring chances were 3-1 Kings when that trio was on the ice together, with two of those chances finding the back of the net. Again, swapping Brown for Havlat was a good decision and it led to a great game by the Brown-less fourth line but it should have been obvious playing Havlat with Pavelski was a bad call. They should have either reunited Marleau - Couture - Havlat and the American Express lines, put Torres with Pavelski and run a Sheppard - Desjardins - Havlat fourth line or simply put Tyler Kennedy in instead. This was game 88 and McLellan still hasn't figured out how to optimally deploy his forward corps. He isn't the only reason this series isn't over yet but he's probably the biggest.

While the Sharks did a reasonably good job of retrieving dump-ins to generate offense, they were once again largely stymied by the Kings in the neutral zone, every bit as ineffective at generating controlled entries into the offensive zone as they were in Game 5. There's a lot to like about San Jose's improvements from Game 5 to 6 but breaking down the Kings' neutral zone forecheck with speed isn't one of them. As Game 7 looms, they need to figure out a way to establish their transition game as they did in Games 1-4 because it's been awfully tough to generate quality looks on Jonathan Quick without it. Patrick Marleau in particular has struggled to be effective these past two games as L.A. has reverted to the more structured neutral zone setup we're used to seeing them employ.

Matt Irwin was the team's best defenseman in Game 6 at turning defensive-zone puck touches into successful zone exits and their second best defenseman at exiting the zone on clear attempts to. Why was he in the press box instead of Scott Hannan for the first five games of this series again? An encouraging sign, and a big reason the Sharks were far more competitive at even-strength in this game than Game 5, is that the team as a whole was able to carry the puck out of the defensive zone on 23% of their d-zone touches compared to just 8% on Saturday.