By the numbers: Game 78 vs. Los Angeles

Share All sharing options for: By the numbers: Game 78 vs. Los Angeles 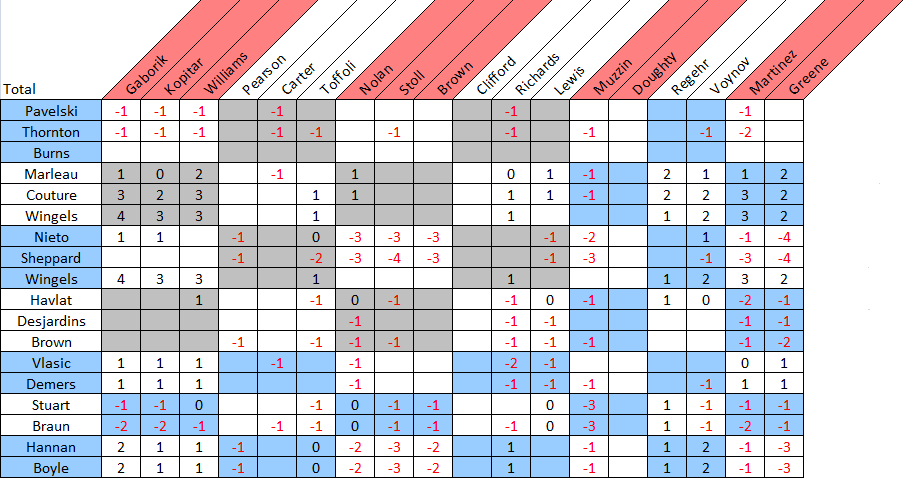 Might as well start with the lone positive: the line of Patrick Marleau, Logan Couture and Tommy Wingels was magnificent going up against Anze Kopitar and company for Los Angeles. But when Couture wasn't on the ice in this game, the Sharks generated one even-strength scoring chance, and it came from the fourth line. That's bad enough as it is but it's particularly concerning when you consider that the Kings were playing their third game in four nights (and second in a row), were without top defenseman Drew Doughty for over 50 minutes and, when Couture wasn't on the ice, neither was Kopitar for the most part. Yet the Sharks still couldn't generate more than a single even-strength chance in those minutes, while giving up seven.

That's why I'm confused that Todd McLellan thought this was a "job well done" by the Sharks. It was a job well done by one line, sure, but getting nothing offensively from the first and third lines at evens, who had the advantage of rarely matching up against the Kings' big guns, is inexcusable. It's just one game, and the Sharks thankfully got the two points to keep themselves somewhat alive in the division title hunt, but this should be a pretty clear indicator to the coaching staff that changes need to be made if they hope to beat the Kings in a playoff series.

You can trace a lot of the Sharks' puck possession issues last night to a flat-out pathetic performance in the neutral zone. Over 70% of their entries into the offensive zone came via dumping the puck in. Perhaps that was a key component of their overall strategy of physically targeting the Kings, and maybe that paid off by tweaking pre-existing L.A. injuries, but relying on dump-and-chase to this extent isn't exactly a blueprint the team should look to when trying to beat the Kings in the playoffs. On the flipside, the Sharks were far too permissive at their own blueline, allowing a Kings team that tends to resort to dump-and-chase hockey pretty easily to carry the puck in on over half of their entries. One positive of note is that the Sharks were able to generate nearly a shot per entry the few times they carried the puck in themselves, although quite a few of those were odd-man rushes which you probably can't expect to generate on a regular basis against the Kings.

So about that Hannan/Boyle pairing...the duo combined to successfully exit the defensive zone on just 3 of their 23 puck touches. That's a pretty significant reason the Sharks were heavily outshot when they were on the ice. Assuming the top two pairings stay stable, I think Matt Irwin has to occupy that 6th defense slot over Scott Hannan in the playoffs. Logan Couture was easily the best player on the ice last night and that started in his own zone as he carried the puck out successfully on 4 of his 7 d-zone touches, in addition to another successful outlet pass.