By the numbers: Game 79 vs. Nashville

Share All sharing options for: By the numbers: Game 79 vs. Nashville 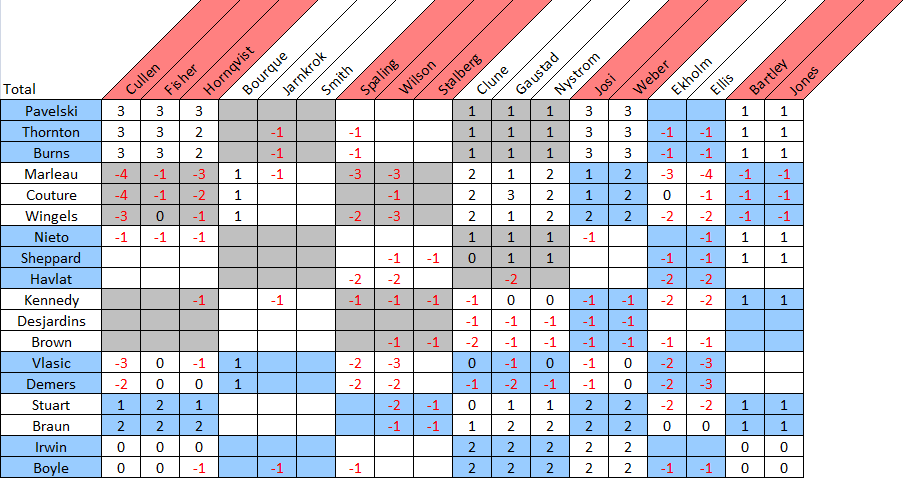 As mentioned in the recap, this game was pretty clearly lost in the second period when the Sharks were outchanced 5-0 by the Predators at even-strength, with three of those chances beating Antti Niemi. Even with their wide territorial edge in the third period when Nashville was content to cede zone time, the Sharks were held to just nine even-strength scoring chances all night.

That's simply not good enough against a non-playoff team playing the second half of a back-to-back, especially since the Sharks needed these points to stay plausibly alive in the division race. Marc-Edouard Vlasic and Jason Demers had an uncharacteristically poor night defensively, with Demers in particular victimized on the Roman Josi goal that made it 3-0.

On the bright side, I thought Brent Burns, although deserving of blame for leaving Patric Hornqvist wide open in the slot on his second goal, had a monster game offensively and these numbers seem to back it up; Burns had four of the Sharks' eleven overall scoring chances last night.

An interesting note on the Predators side of things: despite him being matched up against the Couture line for much of the night, Nashville outchanced the Sharks 6-1 at evens with Ryan Ellis on the ice. Undersized puck-moving defensemen always seem to be undervalued in the NHL; he's a good one.

It's hard to put too much stock in these numbers since the Predators largely collapsed into a defensive shell in the third period, allowing the Sharks to carry the puck in at will. When Dan Boyle is this involved in creating zone entries, it usually means the Sharks were in trouble late in the game since that seems to be the only time the coaching staff gives him the green light to single-handedly rush the puck (and there's a bit of Dan Boyle going into "do-everything" mode at play here too). Marty Havlat had a dreadful game and was justifiably limited to less than three minutes of ice time in the third period.

When your third- and fourth-line centers have this much trouble getting out of their own zone, it shouldn't be much of a surprise when the bottom six as a whole struggles to generate offense or even just offensive-zone time. Andrew Desjardins in particular had a rough night in the Sharks' end, turning the puck over on five of his six defensive-zone touches. Four of James Sheppard's eleven defensive-zone touches ended up on Predators sticks. On a more positive note, Tommy Wingels had a great game in this area, carrying or passing the puck into the neutral zone successfully seven times on his eleven touches. Whenever they're reunited as a line, Marleau, Couture and Wingels transition from defense to offense really effectively courtesy Wingels finding one of his linemates coming out of the defensive zone and Marleau or Couture doing the work to gain the offensive blueline with control, something they're both among the best in the league at.