While squandering a 3-0 series lead to the Kings certainly felt like the franchise's low point, the Sharks would truly hit rock bottom if they respond to the loss by blowing everything up.

The last NHL team to take a 3-0 playoff series lead before losing four straight was the 2010 Boston Bruins. The next year, they won the Stanley Cup.

That doesn't mean the Sharks, fresh off their humiliating and historic collapse against the Los Angeles Kings, are destined for the same fate or even find themselves in a situation comparable to the 2010 Bruins. That Boston team was only in its third year of making the playoffs after trading Joe Thornton to San Jose and starting over; key players like Patrice Bergeron, David Krejci and Milan Lucic were all 24 or under. Meanwhile, the Sharks' latest postseason disappointment comes in the franchise's tenth consecutive year of making the playoffs and their ninth straight after acquiring Joe Thornton from Boston and starting over. Thornton and Patrick Marleau will be 35 by the time October rolls around while Joe Pavelski will be 30.

The San Jose Sharks have their last media availability of the season today. We'll have the best of the quotes and stories for you here throughout the session.

But, still, there's a lesson to be learned from the 2010 Bruins. Despite his team becoming just the third in NHL history to blow a 3-0 series lead, Boston GM Peter Chiarelli largely stood pat that offseason. He didn't panic-trade Bergeron or Zdeno Chara, instead opting to plug a hole by replacing injured top-six forward Marc Savard with Nathan Horton and integrating young players like Brad Marchand and Tyler Seguin into the lineup. He seemed to understand that strange things can happen in the small sample that is a playoff series and that his team frittering away a seemingly-insurmountable series lead to the Philadelphia Flyers wasn't an indication of an inherent character flaw in need of expunging. Granted, that was easier for Chiarelli to do than it will be for Doug Wilson in the coming months.

Chiarelli's core group in 2010 didn't possess an illustrious history of postseason failure. They had never, say, gone up two games to none on the Edmonton Oilers before dropping four straight. They had never been seconds away from taking a 3-1 series lead on a powerhouse Red Wings team before crapping the proverbial bed. They hadn't won a Presidents' Trophy before losing to an eighth seed in six. They had never lost a playoff game in overtime by shooting a puck into their own net. And they had certainly never blown a 3-0 series lead beforehand prior to winning the resulting Game 7 by the skin of their teeth. There's a reason the Sharks have the reputation that they do and a reason that this latest embarrassment will be seen as the final straw in the eyes of many. Those people will call, and already have been calling, for the heads of everyone affiliated with the organization.

As much as it might satisfy the impulsive elements of the fanbase and media in the short term, before these very same people start complaining that the Sharks are no longer good enough to make the playoffs let alone choke when they get there, Doug Wilson should not be fired. And, in turn, Wilson should not blow up this team. Here's another difference between the 2010 Bruins and 2014 Sharks: where Boston blew their series lead against a Flyers team that didn't even qualify for the playoffs until the final day of the regular season, San Jose was felled by a club that was the very best in the NHL by the most predictive measure of success available. The Kings team that completed the comeback against the Sharks is not only two years removed from a Stanley Cup, they're very likely better than they were when they won the championship.

No one is ever going to forget the way in which this series unfolded, nor should they. But maybe as emotions subside it will become clearer that losing in seven games to a top-three team in the NHL isn't a shameful outcome. Aside from an inexcusably flat performance on home ice in Game 5, the Sharks were either the better team or held their own against the Kings in six of the seven games in the series. A lucky bounce here, another save there, and they'd be preparing to face Anaheim right now and would probably beat the Ducks too. Despite the indignity of blowing a three-game lead, the reality is that the Sharks were unfortunate enough to draw a Stanley Cup Final-caliber matchup in the first round. Some of that is their fault, as failing to close out the likes of Florida and Winnipeg in the final month of the season barred them from a division title. But it's mostly just another kick in the ass from the hockey gods who, for whatever reason, have never taken a liking to this franchise. Doug Wilson hasn't overreacted to gut-wrenching turns of fate before, and he shouldn't now.

Mostly become this team is still a guaranteed contender next season. Even if they spend the summer making zero substantive moves; that is, allowing unrestricted free agents Dan Boyle, Scott Hannan and Mike Brown to walk, re-signing their restricted free agents to market-value contracts, adding a third-pair defenseman through free agency and leaving both of their compliance buyouts unused, this is what the 2014-15 Sharks would look like: 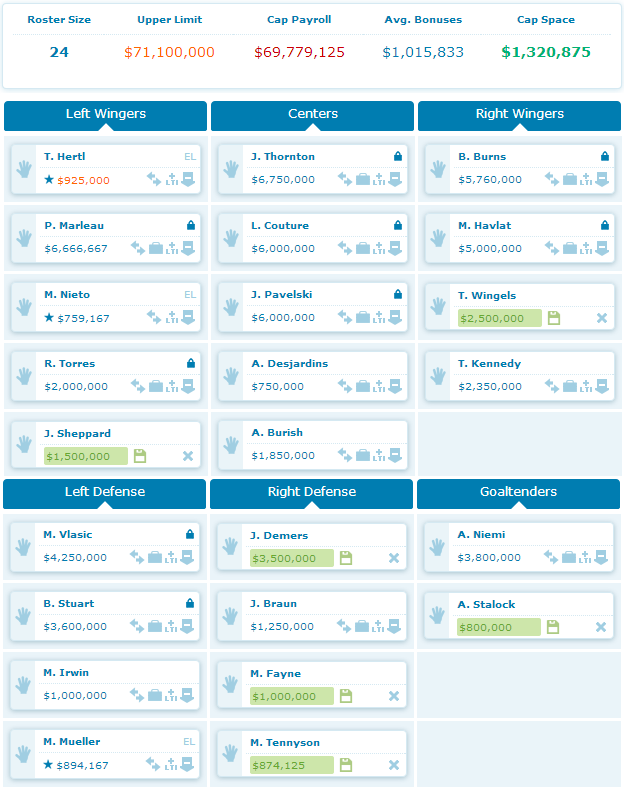 The blueline is still questionable to say the least but, even if Wilson does little more than sit on his hands all offseason, he'll return a Sharks team with the best forward depth in the league, a goaltender who's a good bet to be at least average and a power play that still generates shots at an unparalleled rate and is unlikely to score on less than 10% of those shots again next season. This will be a dominant possession team and it should be a lock for the playoffs and competitive for the division title. If Wilson is active in fixing the holes on the blueline; if he uses his first-ever buyout on amnestying Marty Havlat and/or Adam Burish then spends the freed-up cap space on chasing a defenseman capable of skating, moving the puck and pushing Brad Stuart out of top-four minutes (or, better yet, a defenseman like Christian Ehrhoff or Dustin Byfuglien who's capable of doing all that plus replacing Boyle on the power play), the Sharks would be considered a Cup favorite unless Thornton or Marleau falls off a cliff.

Blowing everything up erases all of that, and the upside is largely nonexistent. Even if the Sharks fired Wilson and Todd McLellan and Jay Feaster rides in on his trusty steed John Tortorella, convinces Thornton and Marleau to waive their no-trade clauses and begins the rebuild, there's no guarantee the Sharks don't simply turn into the Oilers, Thrashers, Blue Jackets or Islanders. The absolute best-case scenario is that the Sharks undergo a painful four-to-five year rebuild and come out the other end exactly as good as they are now. At which point there's no guarantee the rebuilt Sharks core is any more capable of getting over the hump than the current one. There's no guarantee that they would be better-equipped to handle playoff pressure, that they would possess greater mental fortitude or that any of the cliches hurled at the current Sharks core wouldn't be equally applicable to the new one.

The sad reality is that there is no magic formula for winning the Stanley Cup. The only reasonable method is to assemble the best team possible over the longest period possible and hope that in one of those years you're healthy enough, talented enough and get enough bounces to go all the way. Maybe next year will be the year for the Sharks, as it was for the Bruins after their collapse, or maybe not. But the only way to guarantee that it won't be is by overreacting to this latest, and most painful, of playoff defeats and burning everything to the ground.