It depends on who you ask, but it's undeniable that the Canadian is really, really good.

Share All sharing options for: Is Marc-Edouard Vlasic underrated?

Marc-Edouard Vlasic's story is an interesting one. For years he was found on those "the most underrated players in hockey" lists until it got to the point where, hey, maybe this guy isn't really underrated anymore? At the very least he probably shouldn't be underrated based on his resume.

Vlasic has been a pinnacle of consistency for the Sharks. In his eight seasons playing for San Jose, Vlasic has missed more than two regular season games just once. He missed 18 games in 2009-10 because of a knee injury, but when he has been healthy (read: almost always) he has been incredibly effective. His fenwick-for percentage last season was the highest of his career (59.6 percent), but even his average season is impressive (54.5 percent over the last seven years).

He isn't much of a goal scorer as he has netted just 30 in his eight-year career, but as a possession-driving defenseman Vlasic is invaluable. Losing him in game five of the Kings series just about sunk the Sharks, who were forced to rely on...well, anyway, you remember. Vlasic managed to post a positive relative corsi in the series despite being put up against the toughest competition. Here's a look at what Vlasic was tasked with during the regular season. 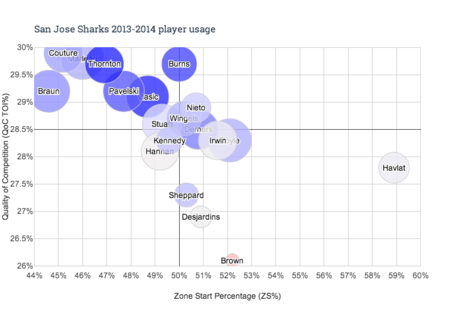 The only defenseman with tougher competition and more defensive zone starts was Justin Braun. Despite being matched against tough opponents, Vlasic managed to post the fourth-highest relative corsi in the league (among defenseman) last season. While you can argue (pretty successfully in my opinion) that Joe Pavelski's great season came as a result of playing with Joe Thornton, you can't really say that about Vlasic.

He did that thing that good players do: Make his teammates better. The numbers bear out that usually meaningless platitude. Every player he was paired with on the ice posted better possession numbers while he was on the ice than when he was off of it. My favorite pairing on that list is (perhaps unsurprisingly) with Thornton. When on the ice together, the Canadians posted a corsi-for of 64.7 percent in a 374-minute sample size. While not on the ice together Vlasic posted a corsi-for of 55.9 percent while Thornton notched a 55.5 -- nearly identical. That's fuckin' adorable.

Before this derails into a Vlasic-Thornton fan-fic, here's a chart to visualize how effective they are when on the ice together. This is screen-grabbed from hockeyanalysis.com -- I'd hit that link so you can check out the chart in its interactive form. 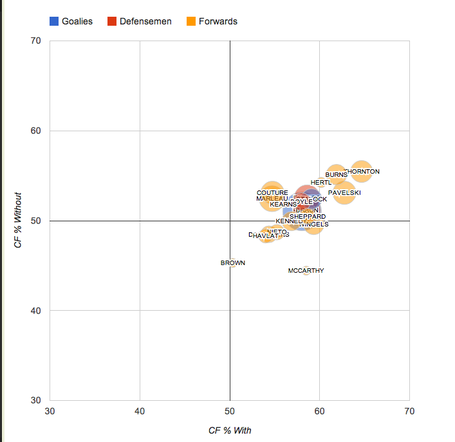 Good thing we got John Scott to bolster the squad, amiright?
He played for the Canadian Olympic team for the first time in 2014 where he supposedly won a gold medal. I don't know if I believe it, as I don't remember a single Olympic hockey game taking place this year, but Wikipedia can't be wrong, I guess.
Oh, and this is all without mentioning what a bargain his contract is. The Sharks extended Vlasic in the summer of 2012 until the 2018 season. The five-year, $21 million has some really awesome cap hit comparables. My favorite is Jack Johnson, but I won't begrudge your pick.
In addition to being really good at hockey and a very reasonably cap hit, Vlasic has a phenomenal Twitter account.

Look at how damn cute that is. And then there's the whole he's good at hockey thing.

I don't know if he's particularly underrated in terms of general knowledge of his existence, but Vlasic is one of those players whose contributions to the Sharks won't really be noticed until he's not playing for them anymore. So appreciate the Sharks best French-Canadian while they have him, dammit.