How bad is John Scott going to be for the Sharks?

John Scott is not good at hockey, but how bad is he, really?

Share All sharing options for: How bad is John Scott going to be for the Sharks?

You might have heard that John Scott is not a particularly good hockey player. But at some point we stopped talking about John Scott the hockey player and instead starting talking about the character John Scott. Not his character, to be clear, which along with his Veteran Presence earned him a job with the Sharks next season. So let's get a real look at just how much damage Scott will actually do when he's included in the lineup.

Scott finished 72nd in relative corsi last season amongst players who played in at least 41 games (he only played in 52 for the worst team in the NHL, by the way). His -4.3 percent relative corsi probably would have been a whole lot worse had he not played just 369 minutes last season. That puts him as the player with the eighth-smallest amount of actual ice time on the aforementioned list.

Going by his relative corsi does Scott a favor, as his standard possession numbers have him at 39.9 percent -- in other words, when Scott was on the ice his opponents made 60.1 percent of all shots taken. He had one goal last year and six goals were scored while he was on the ice -- compare that to the 18 goals scored by opposing teams while Scott was out there. Ever wondered what the top five video results are for "John Scott highlight reel?" 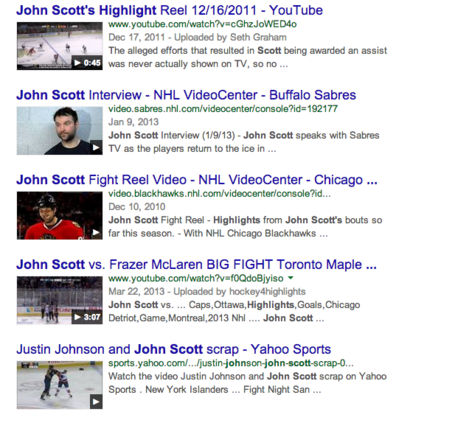 And because I know you are dying to see it, here's the "highlight reel" video that is the number one result on that page.

He and Mike Brown are going to get along very, very well.

One year of data really isn't enough to make any declarative statements about -- plus, I'm dying to show you these next few charts. Here is Scott's WOWY (with or without you) chart for the past three seasons of play. Note: You want to be close to the bottom right of this chart. 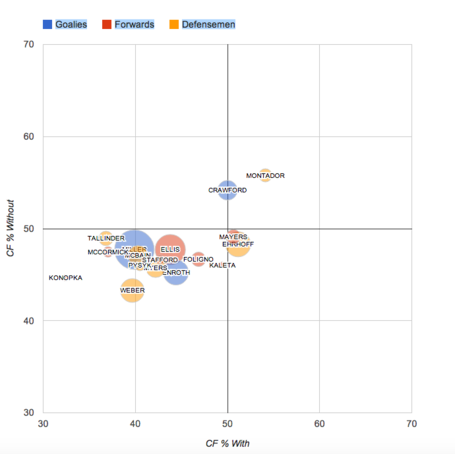 So how about the real reason that Doug Wilson brought in Scott this offseason, straight from the mouth of the Sharks general manager.

"John brings a physical, no-nonsense element to our lineup," said Wilson. "As we integrate more younger players to our team, John's presence alone can act as a deterrent and help keep teams and opposing players honest."

Ya hear that, Dustin Brown? You won't have lil Tomas Hertl to pick on anymore! What's that you say? Brawlers do very little to actually deter "dirty hits" in hockey games? Oh dear.

This all fails to mention that the Sharks already have a bad hockey player that can fight people. WIlson gave Brown a two-year contract just earlier this offseason -- a move that would already be bad even if it wasn't exacerbated by the scott signing. Brown offers some utility beyond being able to punch dudes in the face and, if the Sharks insist on employing someone in this role, he's the guy I'd rather see do it. Signing Scott is not only a bad hockey move, it's a redundant bad hockey move.

The Sharks failed last season because of a lack of depth (read: good hockey players) and some bad luck. Scott is not going to make them better at hockey, nor will he be protecting the youth movement that doesn't actually exist. He will take away a roster spot from a more deserving player (read: literally anyone) and will make the Sharks a less likable hockey team.

If the team isn't trying to win cups anymore, it would be nice for them to cease making moves that are offensive to my moral compass (hi Raffi Torres) and hockey sensibilities (see above). How much Scott hurts the Sharks depends on how much McLellan decides to use him, but no matter how many seconds he spends on the ice the answer will be: too much.