Cap-strapped Chicago is trying to trade a blueliner who would fit perfectly in San Jose.

Share All sharing options for: Nick Leddy is available and the Sharks should try to acquire him

For all the talk about character issues, locker room divides and a lack of mental fortitude causing the Sharks' historic playoff collapse against the Los Angeles Kings last spring, one tangible issue that doesn't get talked about nearly enough is the fact that San Jose lost its number one defenseman, Marc-Edouard Vlasic, minutes into Game 5. After suffering an ugly hit from behind courtesy Jarret Stoll, Vlasic didn't skate another shift in the series and the Sharks went on to drop three straight. The injury to Vlasic certainly wasn't the only reason for those losses but lacking the services of one of the league's top possession defensemen and San Jose's best blueliner by a mile was a significant factor.

After an offseason that was long on speculation but short on actual roster moves of significance, the Sharks are no better equipped to deal with a potential injury to Vlasic now than they were in April. Scott Hannan is currently penciled into the top four and while that will probably change as training camp progresses and the regular season begins, it's not like there's a plethora of great options on left defense for the coaching staff to choose from. It's Vlasic followed by a massive void that needs to be filled.

Enter Nick Leddy. The 23-year-old defenseman is one of the league's most promising young blueliners and, apart from the likes of Erik Karlsson and P.K. Subban, one of its most electrifying puck-rushers. He drives play from the back end, manufactures offense at even-strength and isn't a liability in his own zone. He's also a left-handed shot and, most importantly, available on the trade market:

McKenzie "I know [Stan] Bowman was trying all summer to trade Leddy."

While it might usually be a red flag when a smart organization like Chicago tries to move a talented, cost-controlled young defenseman, there are a few reasons why this makes sense for the Blackhawks. Most notably, they're $2.2 million over the salary cap ceiling and don't want to trade Johnny Oduya, one-half of their effective shutdown tandem, in order to become cap compliant. Leddy is also a restricted free agent at the end of the season, at which point his qualifying offer will be $3.4 million at a time when the Hawks' mega-extensions for Jonathan Toews and Patrick Kane kick in. Chicago also has a slew of young defensemen knocking on the door like David Rundblad, Stephen Johns and Adam Clendening so dealing Leddy seems like one of the more reasonable solutions to their cap crunch.

Acquiring him, or at least trying to, seems like one of the more reasonable solutions to the Sharks' blueline issues as well. As mentioned, he's a lefty, so he's capable of slotting in right behind Vlasic on the depth chart for a coaching staff that prefers (like most) to pair opposing-handed defensemen. He's also just 23, so giving up futures to get him wouldn't compromise Doug Wilson's stated plan of a youth movement. Most of all, he's great at hockey and the Sharks could always use another player in their organization who fits that description.

Since he became a regular NHLer at the start of the 2011-12 season, Leddy ranks 14th among qualifying defensemen in 5-on-5 possession and 20th in 5-on-5 points per 60 minutes. Thanks to Corey Sznajder's tracking project, we also know he successfully exited the defensive zone on 30% of his attempts to last season, 14th among defensemen who had at least 450 defensive-zone puck touches. He's also a one-man neutral zone trap-buster, as evidenced by his near-50% controlled offensive zone entry rate in the 2014 playoffs, unheard of for a defenseman especially against teams as stingy in middle ice as St. Louis, Minnesota and Los Angeles. Courtesy Jen of The Committed Indian, here's how the Blackhawks have performed with and without Leddy on the ice at even-strength over the course of his career: 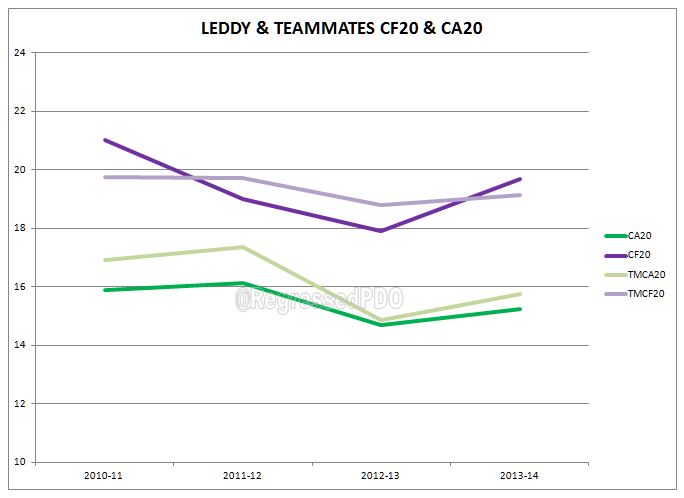 Chicago has done a better job suppressing shot attempts against with Leddy on the ice compared to without him every season of his career, and they generated shot attempts at a better clip with Leddy than without him last season as well. There are certainly important contextual factors to take into consideration here as Leddy has the benefit of easier minutes and zone starts on the Hawks' third pairing but there's no denying his talent with the puck in all three zones. His lack of primo minutes on a stacked blueline has also prevented him from hitting the 40-point mark, meaning he probably isn't in for a huge payday as a RFA next summer.

Leddy would instantly inject speed and offense into the Sharks blueline and potentially even allow them to move Brent Burns back to forward at some point without having to ice a sub-par top four. He'd be pretty close to a perfect fit in San Jose but the bigger question is whether they have any realistic shot at acquiring him. For one, Stan Bowman might be reticent to trade a promising young defenseman to the man who targeted Niklas Hjalmarsson with an offer sheet four years ago. Even if that incident is water under the bridge, presumably the Blackhawks would rather trade Leddy out of conference or at the very least to a Western team they don't stand a decent chance of facing in the Conference Final.

But if the Hawks are willing to work out a deal with the Sharks, it goes without saying that the team should pounce on the opportunity. The entire point of the trade would be to free up cap space for Chicago meaning San Jose would not have to part with anyone on their roster. So it'll take some combination of picks and prospects and while it might hurt to give up a 1st rounder in the deep 2015 draft, the odds of the Sharks selecting someone as good as Leddy are slim and, again, Leddy is still young enough that it's reasonable to expect him to be a top-four staple for the next decade and possibly even a legitimate first-pairing defenseman in his prime.

It isn't often that you have a chance to acquire an established 23-year-old puck-moving defenseman who meets your franchise's biggest need without having to give up a single roster player but the Sharks could have the opportunity to do just that here. One of the advantages of operating significantly below the cap for the first time in years is that the Sharks can now take advantage of other teams having cap trouble rather than be under the cap crunch themselves.