My love for San Jose goalies

No matter who suits up in between the pipes for the Sharks, I'll always have a biased love for them.

Share All sharing options for: My love for San Jose goalies

For long as I've been watching hockey, goalie has always been my favorite position. I think I can attribute that to my love of defense while both playing and watching sports. As a kid playing sports, I was pretty atrocious on offense but took pride in defense. I would usually strikeout playing baseball but was I not afraid to get dirty diving for a ground ball. In basketball I may have not gotten too many looks at the basket but I was a stingy defender forcing turnovers whenever I could.

You couldn't care less about my time playing amateur sports but odds are you probably would have been the opposite from me, hitting doubles into the gap or shooting three-pointers over and over. "Where is he going with this?" you're probably asking yourself. Well as a person who always preferred being on the defensive side of the ball, I have become fascinated with goaltending throughout the NHL.

If I played hockey growing up, I would have been a goalie. No doubt. Problem was and still is 1) I can't skate 2) I'm not agile. You don't have to be the best skater to stand for 60 minutes in the crease but you sure have to be agile, so my hockey career never got off the ground. In a league that is filled with Jagr's, Ovechkin's, and Kane's, I've always admired the Rask's, Crawford's and Quick's.*

Growing up as a Sharks fan, I've realized how fortunate I've been to watch (almost) solid goaltending year in and year out. Although this organization has yet to play in a Stanley Cup Final game, the goaltending displayed throughout the 25 years of its existence has been fantastic to watch and is the reason why I fell in love with the game.

I'm a 20-year old college student so the first five years of the Sharks franchise happened when I wasn't on this planet and the next five were pretty fuzzy. I never got to watch Arturs Irbe play but he became the first superstar for San Jose. Sure, his numbers weren't that great during the 1993-1994 season when he had  a .899 save percentage and a GAA of 2.84 but the man played 74 games.

During the first round of the playoffs that season he was in net when the Sharks upset the Detroit Red Wings in seven games as the number eight seed, still one of the biggest upsets in Stanley Cup playoff history. His numbers got better as he got older and bounced to Vancouver, Dallas, and Carolina, but undoubtedly "The Wall" holds a special place in the heart of Sharks fans.

The face of Sharks goaltending is Evgeni Nabokov. You know that. I know that. Every casual NHL fan knows that. Nabby was the first goalie that I tried to emulate in my living room. It sounds silly, I know, but there was just something about how he played that made him so much fun to watch back behind the defense. He appeared in the 2001 All-Star Game, won the Calder Trophy that same year, and in 2002 became the first goalie to score a powerplay goal.

Nabokov was between the pipes for San Jose for a whole decade and because of that will most likely go down as the greatest goalie to ever suit up in teal. Sure, there was that time where he lost his starting job to Vesa Toskala in 2006 and eventually rotated games with him, but Nabokov would always  bounce back. I was devastated when the Sharks didn't re-sign him in 2010 and let him return to Russia.

Due to the limited salary cap, the franchise had to decide on re-signing Nabokov or Patrick Marleau, literally the other longest tenured Sharks player. I think that is when I realized that professional sports are more of a business than a game. Don't get me wrong, I would have been crushed had it been the other way around but realizing that #20 would be wearing a different sweater was tough to swallow.

30 years from now only a hockey card will remind you that Nabby also played for the New York Islanders and Tampa Bay Lightning after his Shark career came to end, with an extremely short stop with SKA St. Petersburg of the KHL in between. He officially retired as a member of the Sharks in February of last year after Tampa Bay traded him back to the San Jose for future considerations and all was right in the world.

My favorite Nabokov memory was when he slid from left to right to rob Brad Richards of a would-be game-winning goal in Game Six of the 2008 Western Conference semifinals. Richards had a wide-open net no more than ten feet in front of him and somehow Nabby caught it with his left glove. Incredible.

The Sharks would later be eliminated from the playoffs in that same game when Brian Campbell took a boneheaded penalty which set up Dallas for the game-winning goal in the FOURTH overtime. This would also be the last game Ron Wilson would coach for San Jose. That save right there, though, was vintage Nabokov. Still to this day I show it to my friends who haven't seen and they, just like me, are blown away that he was able to get to it.

Nabokov's successor was suppose to be Antero Niittymaki, who signed a two-year contract on the first day of free agency in 2010. I'll be honest: I had no idea who Niittymaki was when he signed on July 1st of that year, so going from somebody of Nabokov's caliber to an unknown (at least to me) wasn't what I was hoping for. He played respectable his first month in teal but Niittymaki was prone to injuries and had suffered a torn labrum in his left hip four years earlier. He was sidelined with a lower body injury after that first month and Antti Niemi took over and solidified his role as the starting goaltender for San Jose, while Niittymaki seemingly fell off the face of the earth.

I was so excited when the Sharks signed Niemi just weeks before training camp in 2010. While I may have not known who Antero Niittymaki was, I certainly knew who Antti Niemi was. He was a thorn in the Sharks side just months earlier when as a member of the Chicago Blackhawks he helped Chicago sweep the Sharks in four games in the Western Conference Finals and win a Stanley Cup weeks later.

Who was this guy? He made the Blackhawks' roster out of training camp, replaced Cristobal Huet midway through the season, and as a rookie won a Stanley Cup. Sure, he had a great team in front of him, but come on, some of the saves he made against the Sharks that series were ridiculous. It was absolutely infuriating watching him make save after save against San Jose that series like the one below.

The goalie who denied the Sharks an opportunity to play in the Stanley Cup Finals was now a Bay Area resident. I couldn't have been the only one excited that he was a Shark even if his contract was just a one-year deal. Still, Nemo took over for Niittymaki and played exceptionally. After going 14-2-1 with a 1.91 GAA in February of 2011, the Sharks locked him up long term with a four-year contract worth over $15 million. His best season came in the shortened 2012-2013 season when he finished with a 2.16 GAA and a .924 save percentage. He was nominated for the Vezina Trophy but lost out to Sergei Bobrovsky. Teammate Logan Couture took to the Internet when finding out Niemi didn't win the Vezina with this since deleted tweet. 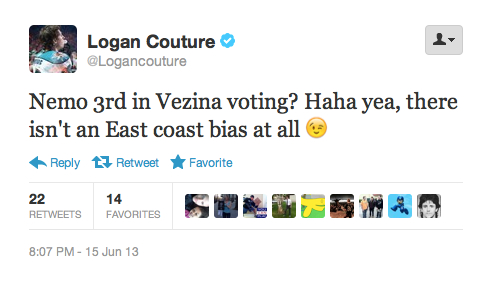 Even though Niemi could never replicate his regular season success into the playoffs, he turned into a five year starter after signing to compete with, if not back up, Niittymaki. When he signed with Dallas last July, I again was disappointed because he had become one of my favorite players as all Shark goalies eventually become. His pad save on Todd Bertuzzi in a shootout several years back has to be my favorite Nemo save because it was nothing but pure luck, yet at the same time he seemed to know exactly what he was doing.

Want to guess who one of my favorite Sharks player is right now? Martin Jones, who else! I'm still a little upset at Jonesy for letting that goal in last night on the Shane Doan shot from parallel to the net near the boards; it seems like Jones has let in several of those goals this year. That, however, is for another day.

I love Martin Jones. I really do. The Sharks took a chance on Jones, a two-year backup in Los Angeles behind Jonathan Quick where it was apparent he wasn't going to become a starter. The Kings dished him out to Boston for about 48 hours in June before San Jose rolled the dice and gave up their 2016 first-round draft pick for Jones.

Anytime you give up a first-rounder it's a risk, but with most pundits expecting San Jose to move into a rebuilding phase in 2015-2016, it was a huge gamble. First off, the Los Angeles Kings would have never traded Jones to the Sharks, so it was awesome that Doug Wilson brought him back to the Pacific Division after his two day tenure as a Bruin, which had to annoy King fans. In the season opener in Los Angeles, he robbed best friend Tyler Toffoli of a goal with his left pad which certainly had to feel good.

Secondly, Jones has played great in his first season in San Jose. He's played a ton of games, sure, and with James Reimer now "backing" him up, Jones should be well rested going into the playoffs. Jones is 34-19-4 with a 2.28 GAA and a .918 save percentage. Did I mention that he has five shutouts too, good for second in the league among goalies? I think it's safe to say he's exceeded the expectations that Sharks fans had of him when he was first acquired.

If Jones can replicate what he has done so far this season into the next two seasons, the Sharks would be silly to let him even test the free agent market when he becomes an unrestricted free agent in 2018. Jonesy is thriving in his first opportunity to become an everyday starter and at just 26 years of age he can get even better.

Along with these four the Sharks have had other strong goalies come through their organization, just in different capacities. Miikka Kiprusoff was supposedly the goalie of the future and he had several strong seasons with the Calgary Flames. Vesa Toskala played alongside Nabokov in 2005-2006 and 2006-2007 and helped San Jose earn playoff berths both seasons. Brian Boucher won 12 games in 2008-2009 as a backup and had an impressive 2.18 GAA. Thomas Greiss was a four-year backup for the Sharks but now has a .927 save percentage for the Islanders, good for second in the league among all qualifying goalies.

There you have it. It's often fun to reflect on how great the Sharks goaltending has been since the franchise was introduced to the NHL. Whether it be a starter or a backup, San Jose has seemingly always been in a good position with their goaltending depth and year after year it's been a (for the most part) a joy to watch.