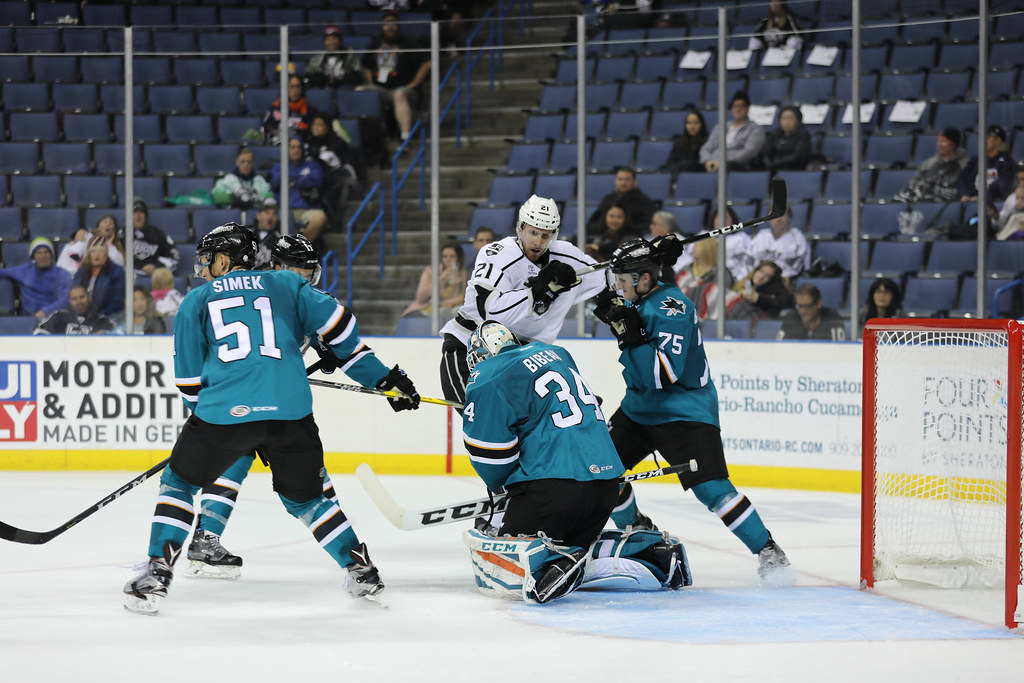 An uneventful five-game road trip ended at the Citizens Business Bank Arena on Wednesday, as the San Jose Barracuda dropped their third game in a row to the Ontario Reign, the latter being powered by a Jonny Brodzinski hat trick.

The Barracuda sent out Antoine Bibeau for the start in net tonight, while the Reign put Jack Campbell between the pipes. Despite the score sheet, Bibeau had a very good game in net tonight, stopping 90.9% of shots he faced. Campbell was a brick wall throughout the second period, making great saves off the sticks of the likes of Jeremy Roy. He finished tonight’s bout with a 90.9 save percentage, as well.

It seemed to be all Ontario throughout the first period. The first goal of the game came on a rebound when a shot from Kevin Gravel was deflected off the pads of Antoine Bibeau, creating a clear path for Matt Luff to tap in his first goal of the season. It only got worse for the ‘Cuda when Jonny Brodzinski, the older brother of Barracuda defenseman Michael Brodzinski, went low stick side off a nifty play by TJ Hensick to make it 2-0 in favor of the home team. With 46 seconds left in the first, a turnover in the Barracuda zone would lead to another big brother Brodzinski goal for his second of the year and the night.

The only goal of the second period came off the stick of Alexander True at 8:41, when a big Cavan Fitzgerald clap-bomb was screened and redirected by the Dane to put the Cuda on the board with his third goal of the season. With that tally, the undrafted rookie out of Seattle now is tied for second in goals for the Barracuda.

In the third period, the Barracuda got much closer, as Brandon Mashinter tallied his third goal of the game after being left completely unmarked on the left side by the Ontario defense. However, the threat would not come to pass, as — stop me if you’ve heard this one — Jonny Brodzinski fired the puck into the empty net at 19:08 to complete the hat trick.

A notable star of the night for the Barracuda was Alexander True. I’m very big on this guy ever since his days with the Seattle Thunderbirds. The six-foot-five center out of Copenhagen is currently putting up .56 points per game, and while there’s definitely room for improvement, he could very well earn his way to a contract with the big club if he continues his play throughout this, and next, season.

The Barracuda will close out this road trip with a less than ideal 1-4-1 record. They’ll come back to the Shark Tank for a six-game home stand, beginning this Sunday at 5:00 PST against the Texas Stars.