Editor's note: Pinned to the front with some slight copy editing.

CheechYou back again, here to bring you some potential splashes the Sharks could (and should try to) make as we approach the Trade Deadline on March 1st, 12 PM PT.

Let's cut to the chase - a big splash approach is exactly the kind Doug Wilson should take this year - SPLASH or nothing. None of that gently-dip-into-the-water-with-a-fringe-depth-forward crap.

The Sharks are fortunate enough this year to have depth galore on their roster and the Cuda (#12thStraight). Let's briefly review that depth now just to be thorough.

This is bar none the best defensive group the team's ever had. We have:

On that note, and particularly with #6 dmen-on-other-teamers Dylan DeMelo (just removed from IR today) and Tim Heed on board as formidable insurance #7s, along with Joakim Ryan and Mirco Mueller behind them, DW needs not look towards bolstering our defense in the next week.

Unless, you know, Doug Armstrong drunk dials him Shattenkirk for Michael Haley with salary retained.

Not right. Well, not for some. Look - if you're one of those guys who thinks the Sharks should go for an 'experienced backup' at the TD, you really should reconsider. Dell's been brilliant in the few times he's been called upon this season, gets better with each game he plays, and for Nabby's sake - the guy's older than Martin Jones and has a lot of playoff experience already.

Remember - he took UND to the Frozen Four and played well with the Cuda in the POs last season, posting a .932 save%. And if he suddenly quivers in fear at the thought starting a game in the NHL playoffs, guess who's on deck as the best goalie in the AHL this season in GAA and SV%?

So yea. SJ's set at the goaltending position. End of story.

At forward, we have the big guns in Pavelski, Couture, and the ageless wonders in Thornton and Marleau, and maybe Hertl, but that's where the idea of a big-time splash may be intriguing.

Sure, Labanc's slotted in very well with the Joes on the top line. The Good, Boed, and Ugly line's been great the last month or so, as has the forechecking triad of Meier/Hertl/Ward and whatever 4th line PDB's decides to ice (yes, Haley has been good. But that doesn't take away from the fact that a guy like Carpenter, Sorensen, Goldobin, even Goodrow, or Meier if he's scratched would fare far, far better).

But ultimately, it's difficult to repeat a trip to the finals, and the Sharks could absolutely welcome a big-time game-changing top-6 forward to cement themselves in as good a position to lift Lord Stanley's Cup as possible. Moreover, Jumbo's not going to be a #1 center forever, and while Couture's an elite #2 center in the league, let's face it - he's not a #1, he won't fare particularly successfully against the McDavids and some other top lines in the league as a #1. A center particularly would kill two objectives with one trade in this regard.

So. Onto my top 5 deadline targets. Keep in mind, these guys need no introduction or explanation as to why they'd help SJ win a cup. I'll just offer my 2 cents on what I'd think it'd take to acquire them and if it'd be worth it. 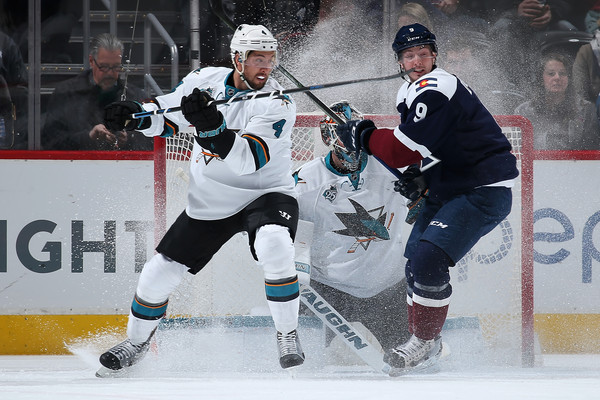 I wrote a piece on acquiring Duchene a few weeks back. There were some good discussions in the comments if you wanna check that out. To update with Wingels gone and the market's inflation of what it'd take to acquire Matt 'The Douche'-ne, I'd say this'd be a deal Sakic looks for:

Now that's obviously a lot to stomach from the Sharks perspective. But Sakic wants to focus on defense in whatever package he brings back. Roy gives him that top young PMD of the future he's looking for, while Dillon solidifies their top4 defense given a competent partner for another 4 yrs. Labanc's obviously developing exceptionally well and could blossom into a top6 winger as early as next year perhaps. In short, it makes sense for the Avs. Now would the Canes plus-1 that offer? Remains to be seen.

Should the Sharks pull the trigger on that deal if no Hurri-1-up? I dunno. Personally, I still would, but just barely. Duchene's an elite player and signed for 2 more years. Yes, I'm in the 'get-Patty-and-Jumbo-a-cup-no-matter-the-(reasonable) cost' camp, but at the same time, you gotta think that this deal, while steep, solidifies SJ a good post-Jumbo-as-the-#1 future too starting in all likelihood next year. He and Cooch are friends too, FWIW (I base my evidence on twitter friendship). 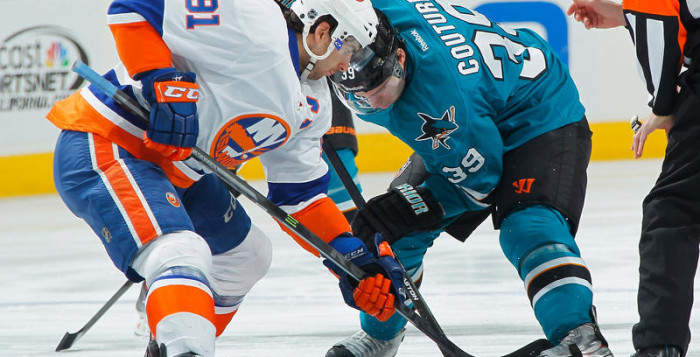 Ok. This guy's the lottery ticket. The grand slam. The 50-ft wave SPLASH. Publicly he'll say he wants to stay an Islander because he's a loyal guy, but with the team's arena and possible organizational future up in flux and the team's failure to build a championship team around him, he might not cry himself to sleep if he's asked to waive his no-trade clause for a shot at the cup and join his twin JT in SJ. And the Sharks hold the privilege of offering a really, really bright foreseeable future. He's a UFA at the end of next year, so bear that in mind.

Yes. That's four variations of a 1st rounder in there. FOUR, Isle fans. (Roy was projected to be a 1st rounder and was the 1st pick of the 2nd round after SJ pounced on the opportunity by trading up, so that qualifies dammit.)

I'd do that deal in a heartbeat. 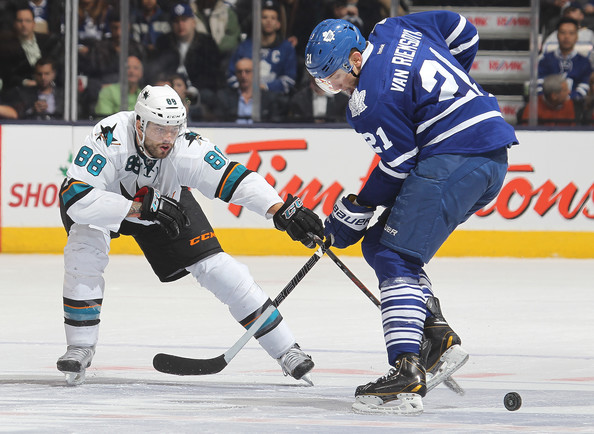 Pending UFA JVR slots in perfectly as a goal-scoring winger with the Joes, and allows Hertl to center an elite 3rd line. Another one of Cooch's twitter friends...

I don't know if I do that deal. It makes sense for TOR - the guy could leave for nothing in a few months, and that's a really good package coming back regardless. But the injuries and UFA status - or even if he signs long-term, the injuries are a big concern relative to the asking price that the market will demand. 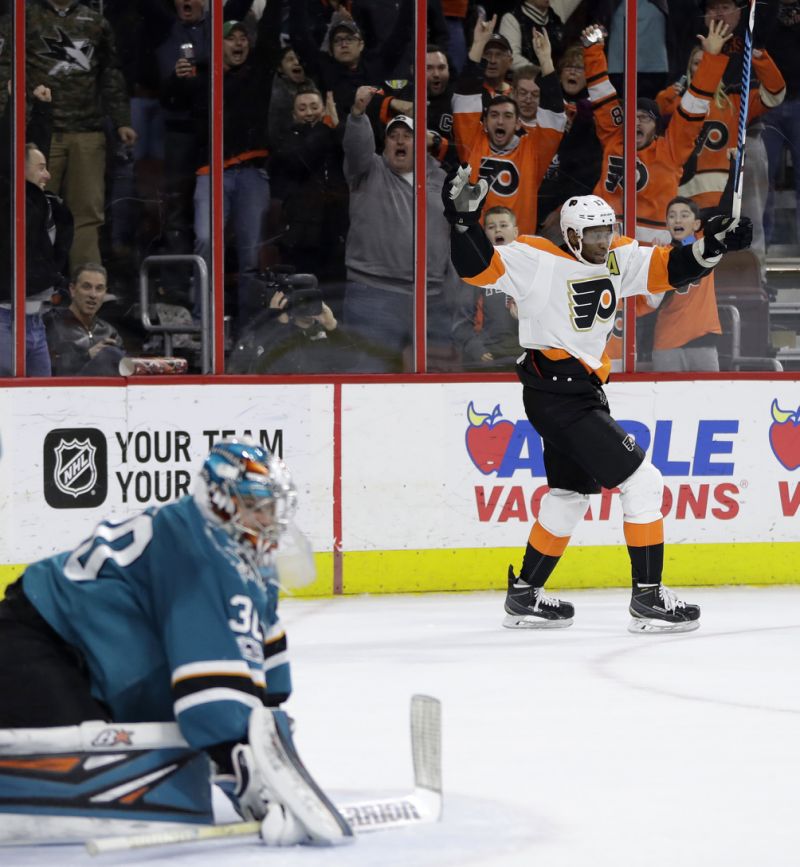 Out of these 5 choices, Simmonds is easily the guy least likely to be considered in a trade. The Flyers are looking to rebuild as they continue their fringe playoff contention, and they're also looking to bolster their defense in the more immediate sense (i.e., someone like Braun rather than prospects). And Simmonds - their only all-star this year (who won the tournament's MVP award, btw) and arguably heart of their team - is a part of all those future plans.

Still, I'd make an offer. A good one at that. The sentiment for wanting to keep him for the Flyers is legitimate. Equally legitimate, however, is the fact that they don't have great depth, and a defense-based package deal could arguably make them a better team.

Steep, yes. But still worth it IMO. Simmonds is signed on for 3 more years at a very reasonable tag of under 4mil. 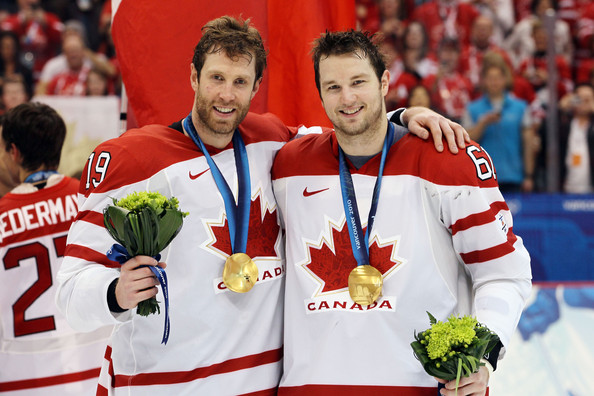 Yea. That Rick Nash. He's still very good by the way. His season so far has been highlighted by multiple groin injuries, which obviously are a cause for concern if the Sharks are targeting him, but when healthy, he still puts up top line numbers.

It feels like Thornton and Nash have been wanting to play together since forever. Before their days out together on the Swiss team HC Davos during the 2012 NHL lockout, before their run together on Canada's gold-medal winning team in the 2010 Vancouver Olympics, even before their first run at tearing up the Swiss league with the same team in the 2004-05 lockout. Apparently they've been friends for a while, which is why trade rumors of Nash-to-SJ were abuzz when Nash was looking for a team after his final season with Columbus in 2012.

Well, while those rumors haven't exactly been renewed, but the Rangers are realistically going to have to say goodbye to one of Nash or Derek Stepan with Vegas's expansion draft coming up at season's end, so why not reward JT's 1000th assist with getting Nash? You gotta admit, the thought of a Nash-Thornton-Pavelski top line's very, very intriguing.

And in fact it shouldn't take much to acquire him. The competition for him will be less, even in this year's terrible market for buyers, due to his really, really high cap hit of 7.8mil for 2 more years. But you know what? The Sharks could pull it off rather easily:

Well lookey there - the math works out pretty neatly with Boedker's 4mil & Dillon's 3.27mil totaling 7.27mil coming off the books. Both Boed and Dills are good young players hitting their prime signed on for long-term at reasonable cap hits, but both also probably just barely fall short of needing to be protected. The late 1st adds insurance here in the unlikely event that one of them is snatched.

I'd include Nazem Kadri, and he would've made the cut over Nash, JVR, or Simmonds even, but if Simmonds is unrealistic, then Kadri is, well, even unrealistic-er. The Leafs aren't trading him. But on the infinitesimal chance he's available, DW needs to make that happen yesterday. For the POs at least, can you imagine Hertl on the top line and a 3rd line with Kadri at center? Mouth-watering...

Tomas Tatar and Patrick Eaves are two other names who'd slot in well with the Joes. Maybe Vrbata too if the price is Goodrow and a 4th, but CheechYou's top-6-7-8 guys doesn't have the same click-baity ring to it as CHEECHYOU'S TOP-5! PRANK! IN THE HOOD! GONE WRONG! GONE SEXUAL??

Anyhow, there you have it guys. Any one of these trades would be huge. On the other hand, they're not the be-all end-all to channel my inner Todd McLellan. In other words, SJ will still be a strong contender for the cup without a big splash, so we shouldn't mortgage our entire future for anyone not named Tavares.

Also, you may have noticed Dillon as a constant on these proposals. Just to clarify - that's not at all an indictment to get rid of him. He just carries a cap hit of over 3mil in terms of being able to make the math work, obviously adds value to a deal, and is one piece actually expendable for the Sharks if there's a greater good in getting a young top-6 forward with right-handed dmen DeMelo and Heed each capable of stepping into 3rd pairing duties with Schlemko (they most likely won't be as good, though, but that's a price willing to be paid for the return).

So which of these trades would you go for if you were DW? Do they make sense? Do you propose alternative, possibly-realistic proposals? Discuss in the comments below.